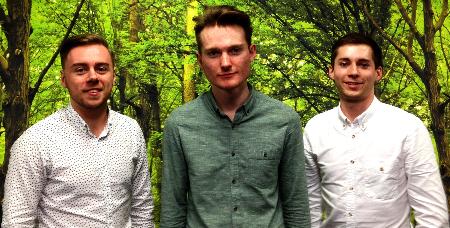 Launching a successful business while at university could be considered an incredible achievement in itself. But three students from the University of the West of England (UWE Bristol) have gone one better – by forming a start-up which has helped two other fledgling companies take off.

Their company CrowdReach, which helps entrepreneurs raise capital through crowdfunding, has attracted more than £85,000 in donations since it was established just over a year ago.

The agency has helped two tech companies in Bristol – a 3D printing business and a virtual reality start-up – eclipse their fundraising targets and has now set its sights on giving more firms a funding boost.

Crowdfunding is an increasingly popular method of attracting funding, with Kickstarter and Indiegogo the most widely-used platforms. But the alarming failure rate (two out of every three Kickstarter campaigns end unsuccessfully) was viewed as a huge opportunity by the trio.

Rob, 21, said, “The problem with crowdfunding is the failure rate – on most platforms, if you don’t reach the target you don’t get the funding. Many campaigners fail to appreciate the time and resources that go into launching a successful campaign.”

Crowdreach helped earn £64,000 for its first client OmniDynamics and, more recently, £22,000 for VRGO. Its focus is on reward-based crowdfunding, offering donors a tangible “pay off” for their generosity if a target is reached.

Its opening campaign was a runaway success, with the £20,000 target from OmniDynamics being surpassed within 11 hours. The campaign helped raise enough money to launch 3D printer accessory Strooder, aimed at bringing down the cost of 3D printing by allowing people to create their own 3D printing ink from scraps of waste plastic.

VRGO was seeking £20,000 to launch a virtual reality chair, allowing users to control movement in the virtual world. Within 24 hours, 70 per cent of the target was reached and by the end of the campaign in December the total had been exceeded.

Final year student Rob is confident the company can build on its successes in 2016. He said, “We have a strong team and a clear strategy for the next 12 months. So far we have made a positive start to the year, with a couple of projects already in the pipeline.”

He and fellow students on the Team Entrepreneurship degree are actively encouraged to start their own innovative businesses. An alternative to traditional degrees, the programme – which launched in 2013 and is only one of a handful of degrees of its type in the UK – is targeted at aspiring entrepreneurs looking to learn about setting up and running a business in teams.

The programme’s undergraduates – known as Team Entrepreneurs – develop skills in everything from event and budget management to marketing, PR and graphic design.

Of the course, Rob said, “Time management has been the biggest thing we’ve learnt since starting the degree. The structure and flexibility of the course means that we are able to dedicate the majority of our time to the business and find time in the evenings and at weekends to complete our assignments.”

CrowdReach was selected for the NatWest-backed accelerator programme Entrepreneurial Spark. The programme takes in promising start-ups, offering them free office space and business advice to help them realise their ambitions. The company progressed to the next round of the programme earlier this year, benefiting from mentoring and a base in Bristol’s Temple Quay for an additional 12 months after an initial six-month placement.

Joe Ryan, owner of VRGO, was impressed with how CrowdReach managed its virtual reality chair campaign.

He said: “Launching a Kickstarter campaign requires a combination of planning and reactive decisions. The CrowdReach team were able to perform both these tasks under intense pressure and delivered an excellent result.”