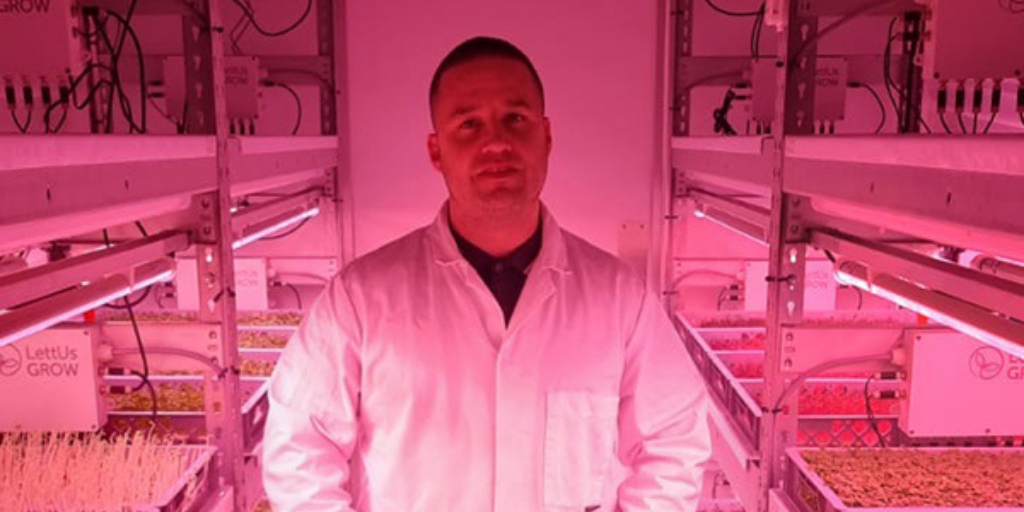 A vertical farming system, set up on Frenchay campus using aeroponic technology to grow and supply micro herbs and baby leaf plants, is the first of its kind to be located at a UK university. The system is being used by student venture Greener Greens Co, which Jamie Taylor founded as part of his Team Entrepreneurship degree.

The 40ft container farm, supplied by LettusGrow, provides 24m2 of growing area and houses a four-tiered vertical grow-bed. The growing process uses a software that automates LED lighting, temperature and water vapour. Nutrients are delivered to the plants via atomisers that spray an organic, nutrient-dense fog onto exposed roots (a technique called ‘aeroponics’).

Jamie Taylor said: “Nature is seasonal, but in this container farm we create our own climate to produce seasonal produce all year round. This is a really innovative system that uses no soil, no pesticides, with crop yields using 95 per cent less water and 99% less space compared to conventional land-based farming.”

The entrepreneur said Greener Greens’ ethos is to have a lower carbon footprint compared to other suppliers and, by providing a growth area close to the point of need, reduce food transportation miles. It is also reducing a reliance on single unit plastic by using re-usable containers to transport the plants.

Team Entrepreneurship is a degree that helps students set up a business as a team. Jamie said: “All this has only been achievable thanks to the University. Key support from UWE Bristol’s enterprise, estates, environmental and sustainability, and catering teams has been crucial in working out how to run the business and how to introduce Greener Greens produce into the university’s supply chain.”

The system is set to produce some 200kg of pea shoots per month, as this plant variety has a short grow cycle of just 12 days. Initially the vegetables will supply the University and other local customers. The enterprise then plans to set up further containers, supplying the super yacht business. “Head chefs on board need high quality produce fast so we have an opportunity to reduce carbon footprint in this industry by setting up a container in the South of France.

“Many existing suppliers to that industry use pesticides and the produce is sometimes flown over 5000 miles to Nice, which leaves a large carbon footprint.”

Greener Greens is also building a geo-temporal inventory app that will allow its customers to see what is growing in which container, so they can place orders and receive fresher produce faster. The app will also allow chefs, for the first time ever, to specify the size and shape of their salads and garnishes in-app and create bespoke garnishes.

Jamie and his Greener Greens system set up on Frenchay campus was featured in yesterday evening’s edition of the BBC’s Countryfile, available to view on iPlayer (from 29:51). 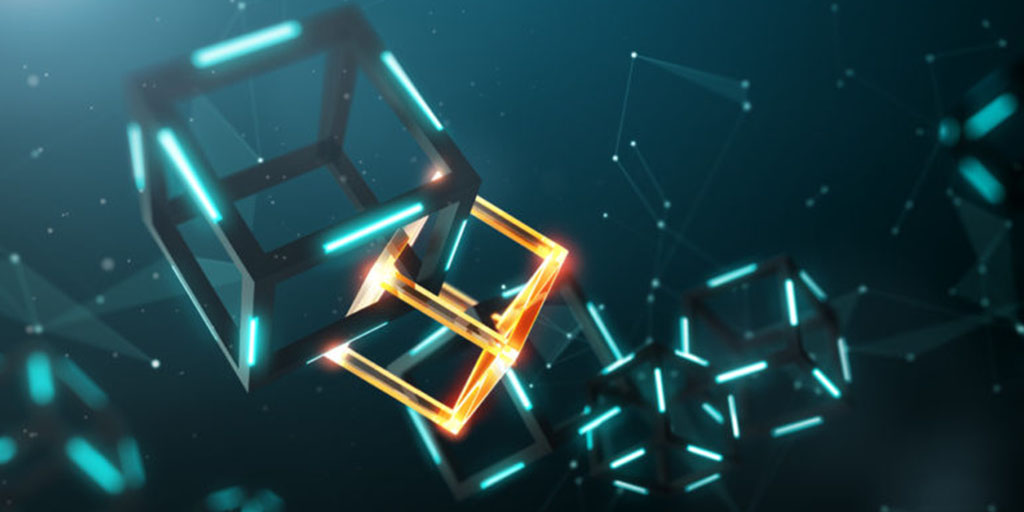 Nish Kotecha, Chairman of Finboot, and Bryan Foss, Visiting Professor at Bristol Business School argue that blockchain could provide a solution to the recent audit and fund management scandals.

Blockchain could provide a solution to restore trust in the fund management and audit industries, according to Nish Kotecha, Chairman and Co-founder of Finboot, and Bryan Foss, Independent Director and Visiting Professor at Bristol Business School.

Kotecha and Foss cite fund manager Neil Woodford’s Equity Income Fund as a perfect example of how blockchain could have prevented such a scandal.

“Not too long ago, Neil Woodford was still regularly being heralded as a “superstar” manager and the “Oracle of Oxford”. How different the story is today,” they said.

“Ultimately, the Equity Income Fund did not do what it said it would, and Woodford ran it unchecked. If investors had been fully aware of the investments being made into unlisted and illiquid stocks, would they have kept their money in?

“There can be no doubt that it’s in the best interest of investors that information is readily available to enable timely decisions to be taken. Dissemination of such information should not be left to the whim of the fund manager who relies on investor trust.

“Ultimately, trust requires transparency to validate integrity. Adopting technologies such as blockchain into the reporting and audit framework of a public fund could provide a fresh approach so that investors can avoid being caught in a Woodford-like situation.

“For instance, an investor-facing blockchain could be programmed to release updates on a fund’s portfolio at regular intervals without further approvals from the fund manager. The constant release of data in a predefined format would provide evidence of the fund’s status, forcing the fund manager to operate within the automated reporting schedules and ensure that the fund’s share price is a fair reflection of its valuation,” they said.

Similarly, Kotecha and Foss argue that a blockchain solution could have prevented and detected fraud like in the Patisserie Valerie scandal earlier this year.

“Had blockchain been used to underpin the accounting framework of the company, it’s likely the thousands of false entries that were discovered as fraudulent would never have been approved by the distributed ledger technology.

“The time-stamped links of blocks could reveal alterations or tampering to the recorded transactions, as well as providing an immediate insight into the performance of the company at any given time,” they added.

But how far away is a genuine blockchain solution from becoming a reality? On this Kotecha and Foss are more cautious.

“While many may suggest that this type of solution is available, few are able to provide an enterprise grade solution that can provide ease of use, integration and scalability within a private blockchain environment. Finboot’s blockchain middleware and application suite can provide this today through proof of concept projects that can be operationalised rapidly as the basis for long term incremental developments.”

Technology has often been mooted as a potential route out of the audit crisis in the UK, but Kotecha and Foss stopped short of saying it negated the need for reform altogether.

“Audit reform is necessary to tackle the increasingly sophisticated financial environments in which we now find ourselves. However, technology can be part of the answer. The FRC Labs and accounting firms are evaluating ways in which technology can be used to reduce audit risks and improve transparency and verification capability. Blockchain, for example, can be used to improve trust in the process while also reducing time and money for a full audit procedure. Technology should be a partner to audit reform,” they said.

Kotecha and Foss believed that perhaps most importantly, blockchain would provide a secure immutable and auditable solution to both sectors.

“Once the data is uploaded onto a blockchain, it is immutable and auditable. Improving the quality of the source data is an important factor to ensure that accurate data is uploaded and this can be achieved through a variety of mechanisms, such as direct data feeds from the point of capture (e.g. from completed stock exchange trades, etc). Overlaying a programme of random periodic audits will then dramatically reduce the time and cost for a full audit procedure while improving confidence and trust in the process, hopefully making such events like Woodford an anomaly.

“More validated, immutable information will generate trust in the fund management market and audit industry as a whole. The choice between investing in public market funds and private market funds should be left to the investor, and public fund managers should be prevented from changing their reporting framework because it suits them. Likewise, listed companies should adhere to a fully transparent corporate reporting process that is not susceptible to distortion. In both cases, there is a clear argument for an automated blockchain that can act as a “single source of truth” for the benefit of investors, on whose trust the share price of listed entities partially depends,” they concluded.

David Barrett, Director of Apprenticeships at UWE Bristol, will welcome you to the event and alongside the Degree Apprenticeship Hub team will be able to help identify your training needs and suitable solutions.
Spaces are limited for this event, so please register below.