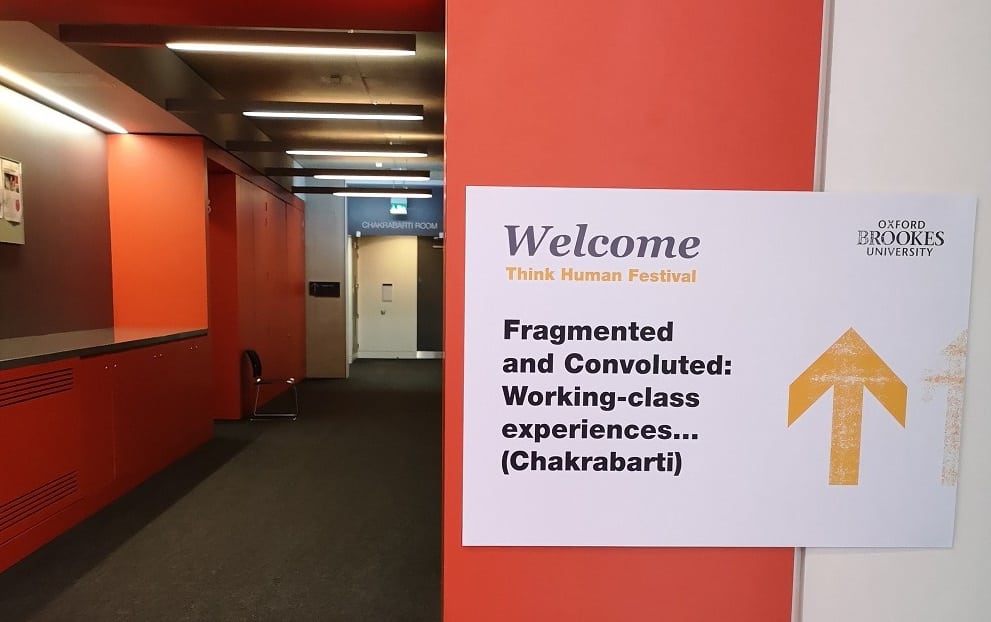 After being invited to contribute to the Think Human Festival, organised by Professor Simon Kövesi, Laura Baldock and their colleagues at Oxford Brookes University, a familiar resurgence of anxiety momentarily flooded me.

Not only did I face the usual worries over whether I’d pronounce words ‘correctly’ or whether I’d be perceived as a ‘caricature’ (as I have heard other working-class female academics being described), I was instantly reminded of the previous time I spoke on a similar theme to that which I was invited to speak on at Brookes.

In 2017, I was invited to speak at the University of Cambridge. The majority of the audience members appeared welcoming of the research that I was there to disseminate from the Paired Peers project and my reflections on how I have navigated the higher education system as a working-class student and academic. Though, as I spoke, I noticed two audience members who were struggling to contain their laughter.

At first, I thought that perhaps I had something on my face or stuck between my teeth. What I soon noticed was that their laughter, which they failed to hide behind their tissues, coincided with some of the words that I was using. As I do in all environments, academic or not, I spoke with my Barnsley accent and dialect. The way in which I pronounced words such as ‘reyt’, made the two audience members widen their eyes while looking towards one another and silently chuckle. I also noticed that they laughed at one of the key suggestions that I proposed: that there should be a working-class association at every UK university, with a particular need for such an association at ‘older’ universities. They found my idea- that students and academics should have space within middle-class dominated university fields to recreate a microcosm based on their own community- laughable.

With this experience nagging at me, I felt doubly anxious to speak about similar matters at Oxford Brookes. However, when I started to present on this occasion, I found myself standing in front of a wholly engaged audience. As I looked around me there was no half-hidden silent laughter, only intrigued faces. As a result, I felt confident to introduce my position that there are three risks faced by working-class students who access higher education, these being: (i) economic, (ii) cultural, and (iii) social risks.

First, I demonstrated the rationale for this position through using data from the Paired Peers research project. I showed that there are class distinctions within university fields between working-class students and their middle-class peers and academic staff. I demonstrated this by showing how working-class and middle-class agents have different social, cultural and economic capital accessible to them and spoke about how these hold different cachets within the university field. Drawing on a variety of student narratives, I was able to explore how different forms of capital were mobilised to mold culture consumption practices which, in turn, differentiated the experiences and graduate outcomes of working-class and middle-class university students.

Second, through reflecting on my own trajectory as a working-class student and academic at university, I explored how I navigated these three risks. I spoke about how I, as an eighteen-year-old undergraduate student, tried to assimilate with the other students that I lived with and the university culture at large. Though, besides meeting three other young working-class women who I studied alongside, I, a working-class girl from ‘Barnslehhhhhhh’, wasn’t successful in assimilating with the hegemonic student population.

I explored how my experiences of social and cultural exclusion were exemplified as I transferred from undergraduate to PhD study. I explained how in response to my lack of ‘fit’ and my observations of those who were proving to be a ‘success’, who were indeed middle-class, I began to question aspects of my identity. I detailed how, as a result of this incessant questioning, I was left with very little: the dominant middle-class culture had pulverised into submission any working-class character that I had. The girl who was known as ‘gob on legs’ throughout her earlier contact with education had become overanalytical of every aspect of herself and, as a result, became subdued. My experiences, and how I embodied these, were misvalued by agents who operated within higher education and thus I jarred with the social and cultural practices which thrived there.

To conclude the talk, I spoke of how I work to find some solutions for these issues for myself and others:

First, I began to observe and read the work published by other working-class women in academia. I watched, listened and drew on their experiences until I was confident enough to share the richness of my own culture: my accent, dialect, sense of humour and style, all of which are considered ‘garish’ when positioned against the backdrop of most universities;

Second, I learned to adore the ‘third space’ that I reside in. I exist here because on the one hand I no longer wholly fit in at home in Barnsley (I am now often perceived as ‘too posh’), and on the other, I do not fit in with academia, not that I have the desire to assimilate with dominant academic culture anyway. Yes, it can be lonely, but I am in the perfect position to achieve my ambitions to teach and work alongside other working-class people who engage with the structures of higher education;

Third, as other academics have done before me, I aim to continue to bring social class- an often-undiscussed or hidden facet of the university experience- to the table, while utilising the tools provided by intersectionality theory. I work to show those who are unrepresented by the prevailing cultures of higher education that they do not have to change to be considered a ‘success’, the definition of which is too often set by a middle-class, white, ableist, male bias.

I will continue to talk about how institutional practices dismiss and ostracize working-class culture and hold up middle-class culture as the archetype of what is deemed successful. I hope that unpicking these via an intersectional approach will help unrepresented students and academics see that it isn’t their fault that they sit on the periphery of these fields. That in fact, our position on the outskirts affords us a unique perspective, one that academia would be foolish to continue to ignore.