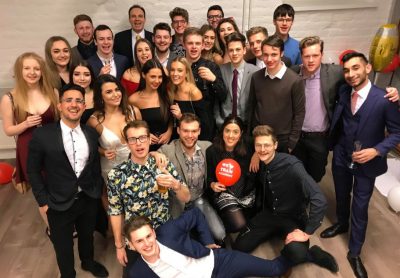 At the end of January, 25 of our Teampreneurs (Team Entrepreneur Students) and 2 team coaches visited Jyväskylä, Finland to take part in a Team 4 Learning event. Teamprenuers from all Levels took part in the visit.

Team 4 Learning is a networking event for all the Teampreneurs and coaches from all over the world.

This year the event was in Jyväskylä, Finland, to celebrate the 25th anniversary of Team Academy Finland.

Launched in Finland 25 years ago, Tiimiakatemia has become a global network of more than 5000 Teampreneurs and 1300 team coaches in more than 20 countries.

The 25th anniversary provided a great opportunity for the Teampreneur community to come together to share ideas.

Our Teampreneurs had the opportunity to meet Tiimiakatemia founder, Johannes Partanen. They learnt about the history of the most influential Team Academies across the world including Tiimiakatemia, Proakatemia and Mondragon Team Academy (MTA).

They also heard from Peter Senge from MIT, who discussed the future of education.

The seminar was attended by over 200 Teampreneurs from across the globe.

Our students also participated in several workshops during their stay. This gave them the opportunity to work with other Teampreneurs and share ideas.

The whole experience was valuable for our Teampreneurs as it gave them the opportunity to share their ideas with other Teamprenuers from across the globe.

Our UWE Teampreneurs will share what they learnt with their team companies in the monthly “Where are you at?”event. There will also be a creative conversation around the event organised for the Teampreneur community at UWE.

Our UWE Teampreneurs hope to create a cross-level “international team” that promotes networking among the different Team Academies.

The Teampreneurs will be attending the MTA anniversary in Bilbao, Spain in May.