It is unlikely that UK Chancellor Phillip Hammond was looking forward to his budget speech. He would have seen the latest economic forecasts from the independent Office for Budget Responsibility. There is no way to spin them as good news.

The newspaper front pages will not make for comfortable reading.

The OBR is tasked with producing detailed forecasts of the UK economy. These forecasts form the basis for evaluation of the Government’s performance against the rules it sets itself on public debt.

In reality, the rules change so often they have little meaning. Today was no exception. By reclassifying housing associations as “private” institutions and fiddling the accounting rules for the upcoming privatisation of RBS, the chancellor conjured up extra £5bn a year of spending – a trivially small amount.

The OBR forecasts of the outlook for the UK economy are of more interest: they are the nearest thing we have to official projections of our future prospects for income, employment and prosperity.

Since its inception in 2010, the OBR has been wrong about one of the most important economic indicators: labour productivity. This is a measure of the goods and services produced on average by each worker. Without productivity growth, living standards can’t rise.

The OBR has consistently over-estimated productivity, as the chart below shows. Twice a year for the last seven years, the OBR has predicted a return to pre-crisis trend growth of two per cent per annum. It was wrong every time: productivity growth has averaged near enough zero over the period. 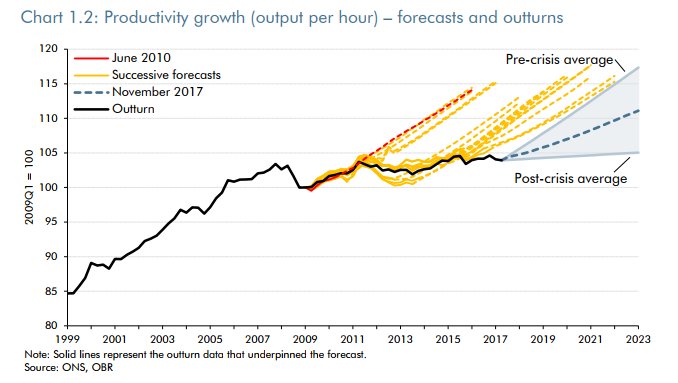 In its latest forecasts, the OBR admitted defeat and downgraded productivity forecasts to 1.5%, in line with recent projections by the Bank of England. While these look optimistic given the recent performance, the implications for growth, incomes and public services are dramatic. Government revenues are predicted to be £20bn per year lower than previously forecast. By 2022, wages will still be more than £500 per year lower than in 2007. And this is without taking the possible effects of a ‘hard Brexit’ into account.

Against such a dismal backdrop, the chancellor’s announcement of new productivity-boosting measures, such as an R&D tax credit, inevitably rang hollow.

To try and sugar the pill, the chancellor announced a few short-term giveaways. The most headline-grabbing was the abolition of stamp duty for first-time house-buyers. This might sound like a welcome boost for young people looking to get a foot on the housing ladder. But the OBR were quick to debunk this: they predict that the resulting increase in house prices will exceed  savings on stamp duty: “prices paid by first-time buyers would actually be higher with the relief than without it. Thus the main gainers from the policy are people who already own property, not the first time buyers themselves.” (p. 128).

Instead of given a leg-up to young people struggling to own a home, the chancellor has poured petrol on the fire and given another hand-out to the already-wealthy.

This will only increase the severity of the debt problem that the chancellor didn’t mention in today’s speech: the debt of UK households. Research at UWE Bristol has found that, while austerity has so far failed to reduce public debt, it has been accompanied by ever-faster growth of household debt. As the chart below shows, for every £2bn the chancellor has cut from the deficit, the rate at which households take on new debt has increased by £1bn. 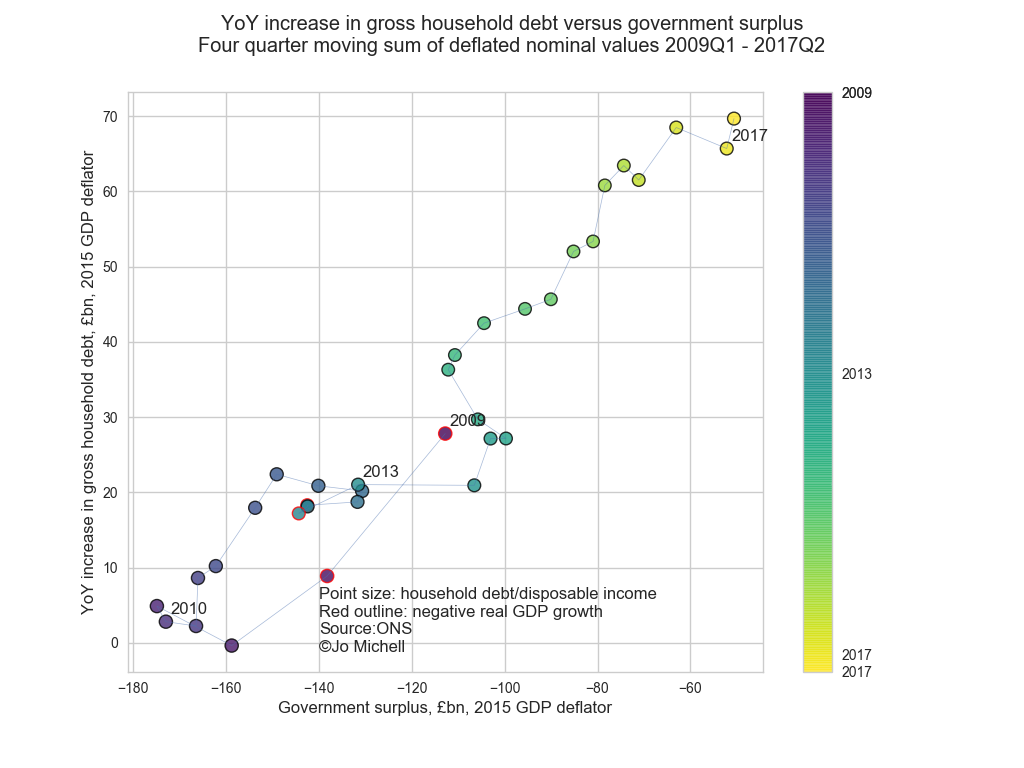 Nothing in today’s budget will reverse this trend. With incomes set to stagnate for years, and households already struggling, more will be forced to take on debt to make ends meet.

The chancellor had the opportunity to recognise the scale of the challenges faced by the country – flat productivity, unaffordable housing, stagnant incomes and government services pushed to the limit – and to announce a real change in direction. He should have announced a significant programme of public investment – in infrastructure, in R&D and in housing.

Instead, he did nothing of substance: a couple of new tax cuts and another nudge for house prices.

The chancellor is out of ideas. Today’s budget is one to forget.