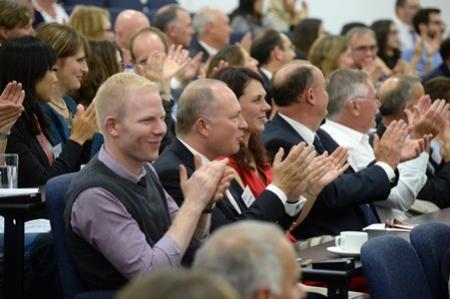 Sir Howard Davies, Chairman of the Royal Bank of Scotland, sets out his thoughts on the financing of British Companies at UWE Bristol’s Exhibition and Conference Centre, on Wednesday 9 March 2016.

RBS remains the largest provider of finance for British companies, though it is smaller than it was before the crisis and bailout. But how is the financing landscape for British companies changing? New ‘challenger banks’ have come on the scene, together with a range of new types of provider – peer to peer tenders, crowd funding etc.

The University welcomes Sir Howard to the Bristol Distinguished Address Series,to discuss how firms should try to navigate through this more complex marketplace.

Series organiser, UWE Bristol’s Professor Nicholas O’Regan says, “We’re delighted to welcome Sir Howard Davies to our 2016 Bristol Distinguished Address Series. These lectures have become a popular event for the Bristol business community, with the opportunity to network and hear directly from inspirational figures in industry with a wealth of strategic experience and leadership skills at the highest level.”

Sir Howard Davies was appointed Chairman of the Royal Bank of Scotland on 1 September 2015. Previous to this, Howard was Chairman of the Phoenix Group between October 2012 and August 2015. He recently chaired the UK Airports Commission and was the Director of the London School of Economics and Political Science from 2003 until May 2011. Prior to this appointment Howard chaired the UK Financial Services Authority from 1997 to 2003.

Previously, Howard was Deputy Governor of the Bank of England, after three years as the Director General of the Confederation of British Industry. Earlier in his career he worked in the Foreign and Commonwealth Office, the Treasury, McKinsey and Co, and as Controller of the Audit Commission.

Howard is a Professor of Practice at the French School of Political Science in Paris (Sciences Po).

Discuss this event on Twitter using the hashtag #BristolLectures.