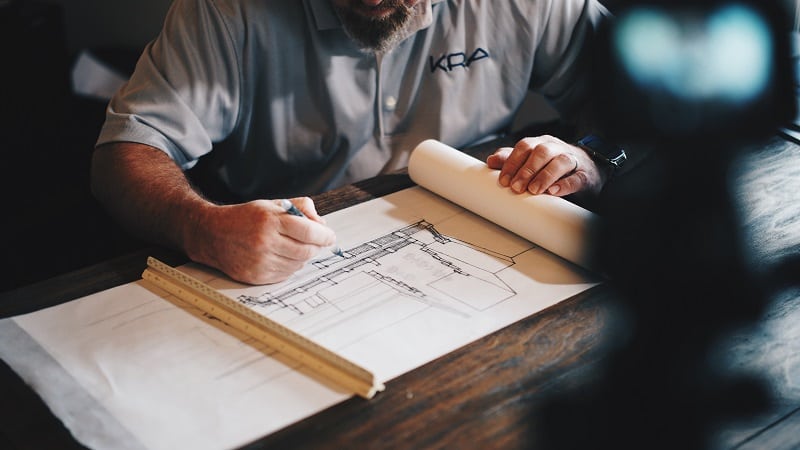 Over the past decade, apprenticeship policy has changed dramatically; with an increase in participation and an expansion in opportunities at Level 3 and above. There has also been a growing interest in whether apprenticeships offer progression to HE. Yet, despite around 35,000 former apprentices progressing to HE between 2006-07 and 2012-13, their voices are largely overlooked.

An innovative methodology? The role and influence of networks

This study explored the experiences of former apprentices who were studying in HE using narrative, longitudinal methods. The resulting case studies focused on former apprentices while drawing on multiple perspectives from their personal and work networks. The challenge was to balance a focus on the former apprentices with an interweaving of their networks to give an insight into complexities, tensions and contradictions. The networks comprised friends and family, alongside newer associates such as HE tutors or work managers. Thinking of networks in malleable forms, as people join and others exit, helps to appreciate their changing influence within someone’s life. This approach has furthered the understanding of the former apprentices’ lives through different viewpoints and broader insights.

One case study – Jamie Whitefield (all names are pseudonyms)

Diagram of Jamie’s most influential networks 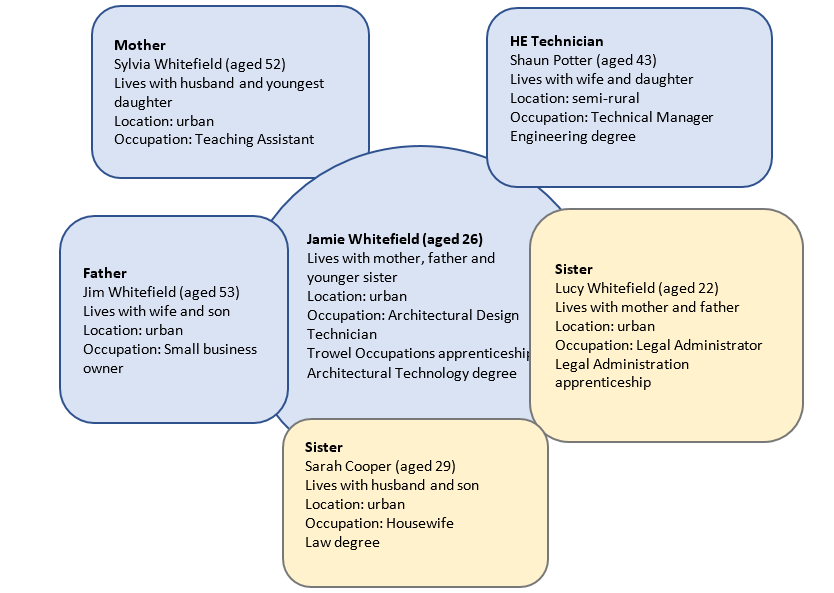 Jamie left school at 16 and bounced between unemployment and low skilled employment before he stumbled into a Bricklaying Apprenticeship which he then used to enter an Architectural Technician degree. Jamie is a first generation HE student, and his father is an electrician and his mother a teaching assistant. While there was a shared work ethic, education is viewed as a means to enter work.

One of his Apprenticeship placements was for an artisan builder whose progressive approach was highly influential. This work led to Jamie developing pride in his craftsmanship, with respect from his colleagues restoring his confidence. When the physical demands of the job took their toll Jamie began to contemplate a different future:

Some days it would be a rainy day, and you’d be in a trench, covered in mud and laying soggy concrete blocks and I would just think. When two people would walk past the site in their suit or whatever and I would just imagine myself in another life, you know.

While Jamie’s network was absent from his early decision-making his sister, along with others, were influential in his decision to progress to HE. Being at university also broadened his network, for example, he struck up a friendship with Shaun (a course technician) who was impressed by Jamie’s industry knowledge and hard work:

[Jamie] just worked, he never stopped working. He knew that this was his big shot at getting out of, you know, climbing the social strata, not being that guy anymore.

Jamie’s occupational identity underpinned his learning, and he was most engaged when his past experiences were utilised. Despite some difficult aspects he valued the opportunity to use his knowledge and was motivated by the high expectations of his tutors:

I don’t think I go unnoticed; I get like As in design projects… I think our tutors do recognise that I’ve got, that I’ve produced work that a builder could interpret and they expect that from me, knowing that I’ve got the experience that I’ve got.

Jamie’s previous fragmented learning and work experience made him acutely aware of where he may end up if he failed in his degree. This heightened sense of risk fuelled his motivation and led him to draw on the resources of those around him when he needed support. His account of HE reflects a transformation and a balance, between investing in a new improved identity and holding on to a cohesive self:

I used to be a different person; I’ve done a lot of growing up… I had some quite ignorant views… I wasn’t right, I wasn’t a positive person, but your eyes are opened as you learn more… I mean, I was that person who said I couldn’t do it, and part of me, until I did it, a lot of me wasn’t sure I could do it, whether I could come to uni.

Due to Jamie’s determination and his willingness to accept the support of his network he graduated with an Upper Second-Class Honours degree and several job offers.

What can we learn from this work?

The narratives explored here provide insight into the socially and occupationally embedded nature of educational participation which is rooted within family, friendship and peer networks. The networks draw into view the shared attitudes and dispositions about education and learning, such as the value placed on education and employment choices. For example, occupational role models encountered during the apprenticeships were powerful influencers on trajectories to HE. While some of this data can be unpicked from individual narratives, the richness of networks of data helps to set individual behaviour within a broader context. The case studies for the overall study were reflective of the diversity and complexity of apprenticeship progression to HE, both due to the variety of qualifications and the nature of provision. Furthermore, they draw attention to the pathologising of apprentices as deficient, without the ‘proper’ educational background, or lacking aspiration. The stories in this research, instead give insight into how they become effective HE students. The impact of role models was an important factor in this.

Author: Alison Rouncefield-Swales has recently finished her Phd at the Department of Education and Childhood, the University of the West of England. She worked with Dr Richard Waller and Dr Neil Harrison.