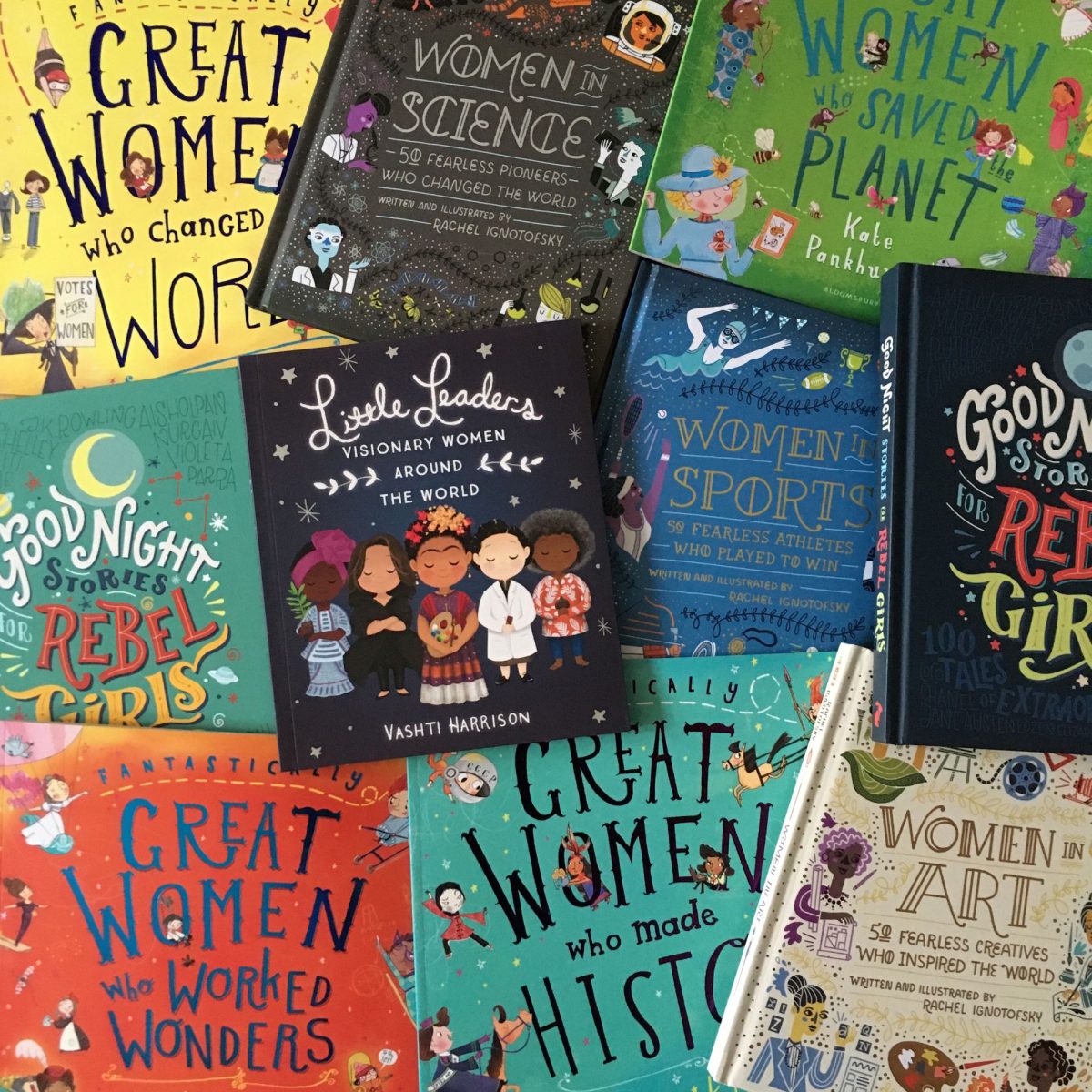 This article is a guest blog from Louise Couceiro, a PhD Researcher at the University of Glasgow. Louise’s research explores how children aged seven to ten engage with and respond to collective biographies about women published since 2016. In this article, Louise suggests that although the proliferation of texts centering women’s achievements is laudable, supporting and encouraging critical reading of these texts is crucial.

An Explosion of Children’s Biographies About Women

Over the last five years, children’s nonfiction books about women have proliferated rapidly in the United Kingdom and beyond.If you step into any bookshop, you are likely to find a shelf, if not an entire section, devoted to biographies that present stories of women’s achievements throughout history. In the UK, Kate Pankhurst’s Fantastically Great Women Who Changed the World (2016) paved the way, though it was arguably the publication of Elena Favilli & Francesca Cavallo’s Good Night Stories for Rebel Girls (2016) that prompted an explosion of children’s biographies about women. The book was translated into dozens of languages and quickly sold more than a million copies worldwide. This rapid increase in female representation within children’s nonfiction is as exciting as it is long-overdue. From the biography of Haitian pirate Jacquotte Delahaye to the biography of Italian astrophysicist Margherita Hack, the books are brimming with breadth and diversity.

The Study: How do children engage with these texts?

The question at the heart of my PhD research asks how a group of children, aged seven to ten, engage with and respond to collective biographies such as these. To explore this question, I conducted small group reading sessions and individual interviews with eight children on Zoom in the latter half of 2020. In addition to the books, each participant also received a reader response toolkit in the post. The toolkit was comprised of open-ended, arts-based activities, allowing participants to choose additional methods for responding to the texts. Participants’ responses included drawings, choreographed dances, sock puppets and silent LEGO movies. Critical content analysis of the texts and my analysis of the participants’ responses thus far indicates that although the proliferation of texts centering women’s achievements is laudable, supporting and encouraging critical reading is important. Here, to read critically means to ask questions of the text, to be cautious of claims to absolute truth, and to be open to exploration beyond the text. Crucially, this might mean challenging readers’ expectations of the genre.

These women are inspiring, but where are the “hiccups”?

Of course, encouraging young people to be aspirational is important, and the existence and visibility of texts such as these are valuable. For example, the underrepresentation of women in STEM is well-documented and these texts present a plethora of role models for young readers to engage with. One of the primary ways in which readers are encouraged to actively engage with the texts is through use of direct address. In Fantastically Great Women Who Saved the Planet (2020) readers are asked, ‘How will you speak up for our planet?’ Imperative verbs are also used, as readers are told to be like the women presented: to be inspired, to be confident, to be brave. However, to be like the women in the texts or, rather, to be like how the women are generally represented in the texts, means adopting wholly positive qualities. Indeed, the women in these biographies are mostly presented in one-dimensional format – their flaws, imperfections, failings and defeats are only briefly touched upon if not entirely erased.

Participants in the study repeatedly reported that they found these women and their achievements inspiring. Discussing the biography of Cora Coralina – a Brazilian poet and baker – Harry said:

“She was always confident in herself and if you’re confident in yourself then it’s actually gonna work out. If you think oh no I’m gonna do terrible well, you might go all jumbly all over the place and be terrible because you thought you would be terrible so, just think that you’re gonna be great because that’s all you need to think about really.”

Harry’s response implies that aspiring to be confident like Cora Coralina is a worthwhile endeavour. If you’re confident, it’s “actually gonna work out”. However, at the same time, participants clearly viewed these women as exceptional women. Their one-dimensional, hyperbolically positive portrayal was not lost on them. One participant, Orla, noticed the absence of what she called “hiccups” in these women’s lives, reflecting that

“Sometimes some bad things can make them seem extra interesting. For Cleopatra, that’s one of the reasons I’m into her.”

For Orla, the inclusion of “hiccups” could make the women’s biographies even more interesting. Yet, encouraging readers to engage critically, to seek out the “hiccups”, complexities and nuances of these women’s lives, is important for another reason. Spotlighting women’s positive attributes and concealing behaviours or qualities that might undermine this positivity has worrying implications for how young readers might (unrealistically) perceive these women and, consequently, how they might perceive their own self-worth. In other words, if readers do their utmost to be like these women, as instructed by the texts, and inevitably fail to emulate these exemplary ideals, they might feel that they themselves have failed, that they themselves are not good enough.

Although there were numerous points during the study where, without prompt, readers engaged critically, they also ascribed nonfiction the status of irrefutable fact. Or, rather, they expressed their expectation that that is what nonfiction should be. For example, when I asked participants if they thought everything in the books was true, Lucas responded that he thought so, else we wouldn’t be using them for the study. Lucas’ response talks directly to the expectation that factual accuracy is/should be a key criterion for choosing nonfiction books for educational purposes. This is not an altogether terrible expectation, but one of the consequences of this expectation is that it might preclude readers from challenging the text’s authority.

There are innumerable reasons why encouraging critical reading of nonfiction texts is important. In his book, A Literature of Questions: Nonfiction for the Critical Child, Joe Sutliff Sanders contends that we ‘should invite critical engagement and foster it where we can because doing so is democratic, respectful and humanizing’ (2018: 230). I couldn’t agree more. In my study, even encouraging critical reading of the texts’ title and peritextual features inspired important discussion around who these texts are ‘for’. For example, participants perceived the title of Good Night Stories for Rebel Girls to explicitly invite a female audience, but on reflection were adamant that the content was for girls and boys. In this instance, a lack of critical engagement with the title would have been regrettable, especially given that as Alleen Nilsen shrewedly argued in 1971, ‘it isn’t going to profit us very much if we convince a little girl that she should become a doctor’ unless we also convince ‘all the men in the world who now think it unmanly to go to a woman doctor’ (p. 921). Ultimately, critical reading of these texts is crucial. However, we might need to support readers to relinquish or reframe their expectations of the genre in order to fully embrace the democratic, respectful and humanising engagement that Sanders alludes to.