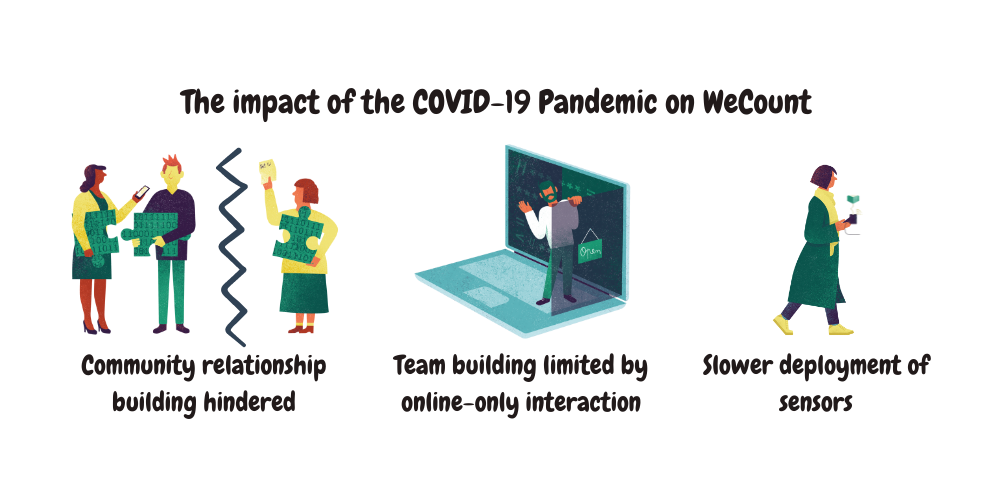 WeCount was a two-year Horizon 2020 project which aimed to quantify local road transport, produce scientific knowledge in the field of mobility and environmental pollution and co-design informed solutions for several road transport challenges. This citizen science project empowered citizens to take a leading role in the production of data, evidence and knowledge around mobility in their local areas. Five case studies across Europe were involved in WeCount: Madrid and Barcelona in Spain, Leuven in Belgium, Ljubljana in Slovenia, Dublin in Ireland and Cardiff in the UK.

The project started in December 2019 and finished in November 2021, running almost entirely during the global COVID-19 pandemic and having to adapt to restrictions and online delivery.

Citizens were given low-cost traffic sensors to install in their homes, enabling them to collect and analyse traffic data, as well as engage with key stakeholders throughout the process. The project has engaged with more than 1,000 citizens and stakeholders through workshops and other events. A total of 368 citizen scientists from WeCount case studies directly engaged with the project. An estimated 230,000 people were engaged indirectly through social media and the project website.

There was a nearly perfect split of males (51%) and females (49%) participants in the project.  WeCount was able to attract a younger demographic than most citizen science projects with 29% of participants being younger than 16. This skew towards younger audiences reflects the effort of staff in reaching them when possible. WeCount reached 16 schools across Europe and engaged with 305 school children. WeCount citizens were highly educated (82% had a degree or above) which maybe a reflection of the online and digital conduct of the project due to COVID-19 restrictions.

Citizens took part in several workshops, from assembling the sensor to learn how to analyse the data. Across case studies, a total of 52 events and workshops took place, most of these were online. These events and workshops engaged a total of 843 citizens across Europe. Overall, citizens tended to enjoy the activities; 75% saw some improvement in their knowledge and almost half (48%) of citizens plan on using the data after the project ends.

By the time the project came to an end, 10% of participants had taken action and policymakers see huge added value in the project. WeCount was able to reach and sustain engagement with a broad demographics in society, with Telraam acting as a constant reminder to citizens to look at the data and stay curious about what data others in the network were capturing. The sensor is low cost and open access and is currently being refined, in response to citizens feedback to improve installation, design and accuracy. Alternatives have been explored for non-tech users such as strawberry plants, facilitated discussions looking at the data and awareness-raising roles created for citizens.

The project provided cost-effective data for local authorities, at a far greater temporal and spatial scale than what would be possible in classic traffic counting campaigns. The five WeCount case studies developed professional relationships with decision makers, which led to mutual benefits such as knowledge transfer, new contacts and access to widely subscribed communication channels.

Running a large-scale Citizen Science project during a global pandemic was a challenge but one that the WeCount team have excelled at, by very quickly changing and adapting all plans from recruiting and engaging face-to-face, to recruiting and engaging citizens largely online. More on the impact of the pandemic in delivering citizen science projects can be found here.

There is no question that the COVID-19 pandemic impacted plans to build potential relationships with some citizens, especially those from low-socioeconomic groups and intermediary organisations. Other impacts included slower deployment of sensors and reduced capacity for teams to build their own sense of community. Despite many setbacks, the case studies persisted in completing their engagement cycle. They shifted to online and did well in energising, encouraging, supporting and staying connected with citizens where possible, working collectively to co-design a truly participatory citizen science project. Clearly there is enthusiasm among some citizens to act, however some remain frustrated by what in their opinion is inadequate action from decision-makers, even after they do engage.

This evaluation shows the importance of co-designing citizen science projects with citizens so that they are engaging, enjoyable and empowering. The more a citizen enjoyed their time in the project, the more likely they are to continue working with WeCount data after the project ends, which will eventually lead to taking more action. In addition, the greater the street-level knowledge improvement the more likely a participant is to act.

If you are interested in learning more the evaluation report can be found here.