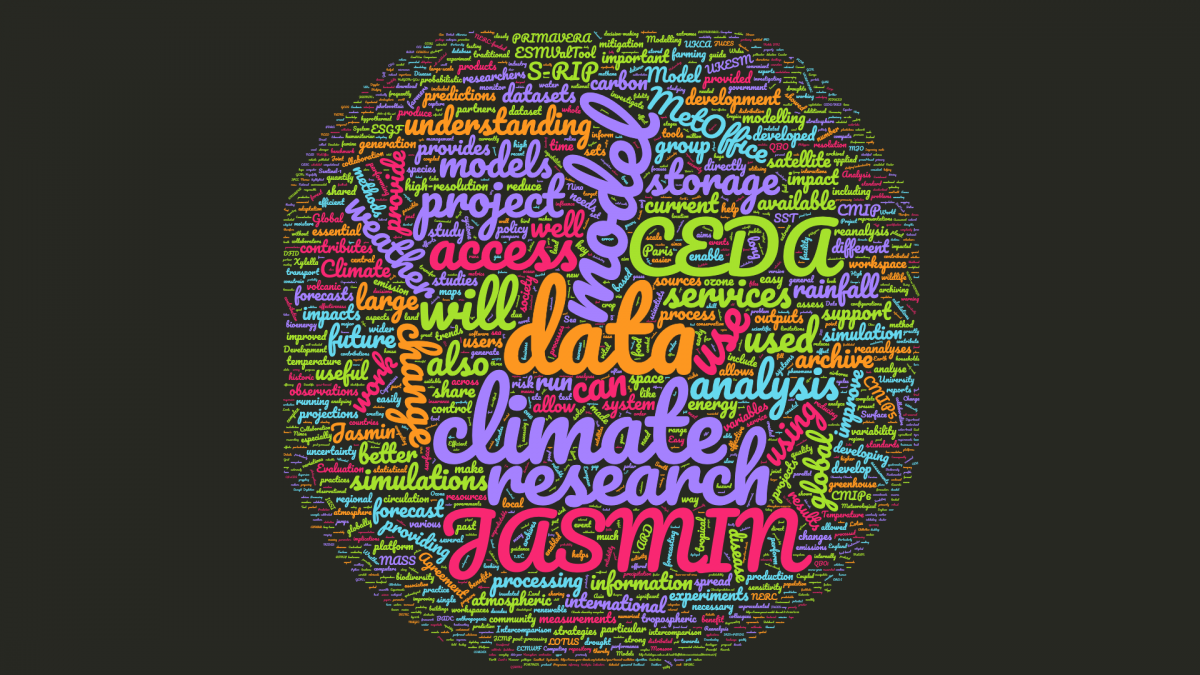 Studying part-time and working full-time is challenging to say the least. But now that I’ve finished, I can honestly say it is one of the most rewarding things I have ever done. The blood (tonsillectomy a few months before project deadline), sweat (hobbling around UWE on crutches is exhausting) and tears (both happy and stress induced) were all worth it now that I can see the findings of my MSc project being used in the real world.

Over the past (nearly) five years, I have worked at the Centre for Environmental Data Analysis (CEDA) – a data centre and supercomputer facility geared towards supporting the UK’s atmospheric and earth observation science communities. We are a small team that provides services for over 50,000 users (including scientists/students/private companies/general science enthusiasts/etc.). In the past year alone, users have downloaded over 775 Terabytes of data – that’s equivalent to more than 175 million photos! We increasingly need to justify our role in funding applications in order to continue providing these services. However, providing evidence of what users are using our services for is not easy information to collate – which is where my MSc project comes in.

My project entitled ‘Community-led ideas for collecting impact stories from CEDA service users’ sprung from this funder requirement of evidencing our services impact and was supervised by Dr Clare Wilkinson. The term ‘impact’ has many different meanings depending on who you ask about it. For my project, we defined impact as: ‘‘Beneficial changes that occur in the real world (beyond the world of researchers) as a result of research that relied upon CEDA services for its success’. This is the information we need to provide as evidence to our funders; but if it’s tricky to define impact, it’s even more difficult trying to measure and collect it – especially when the impact is ‘once removed’ as with our situation.

The project was undertaken in Summer 2018 with an online survey (520 responses) and a series of focus groups (26 attendees) at conferences and meetings that our key user communities were attending. The findings were generally positive and constructive – our users were keen to help us! However, there were disagreements as to how the impact information should be collected. Key recommendations from the research included;

As these findings were ‘the answers’ to how we could collect impact information, it has meant we have been able to implement and act upon them. In January 2019, we targeted a section of our user community with a short survey asking them for basic information about the impactful science our services have enabled them to carry out. Over 50 responses were submitted, of which approximately 80% were suitable for use as a more detailed impact story – meaning we now have access to ~40 stories that CEDA can use as evidence when applying for funding.

We are hoping to share some of the stories with our user communities soon, however as we received more stories than we expected it’s taking some time… it’s just me working on this!

The MSc Science Communication at UWE Bristol has allowed me to steer my career path where I want it to be, and I am now CEDA’s (first) Communications Manager. I don’t believe this would have been possible without studying at UWE.