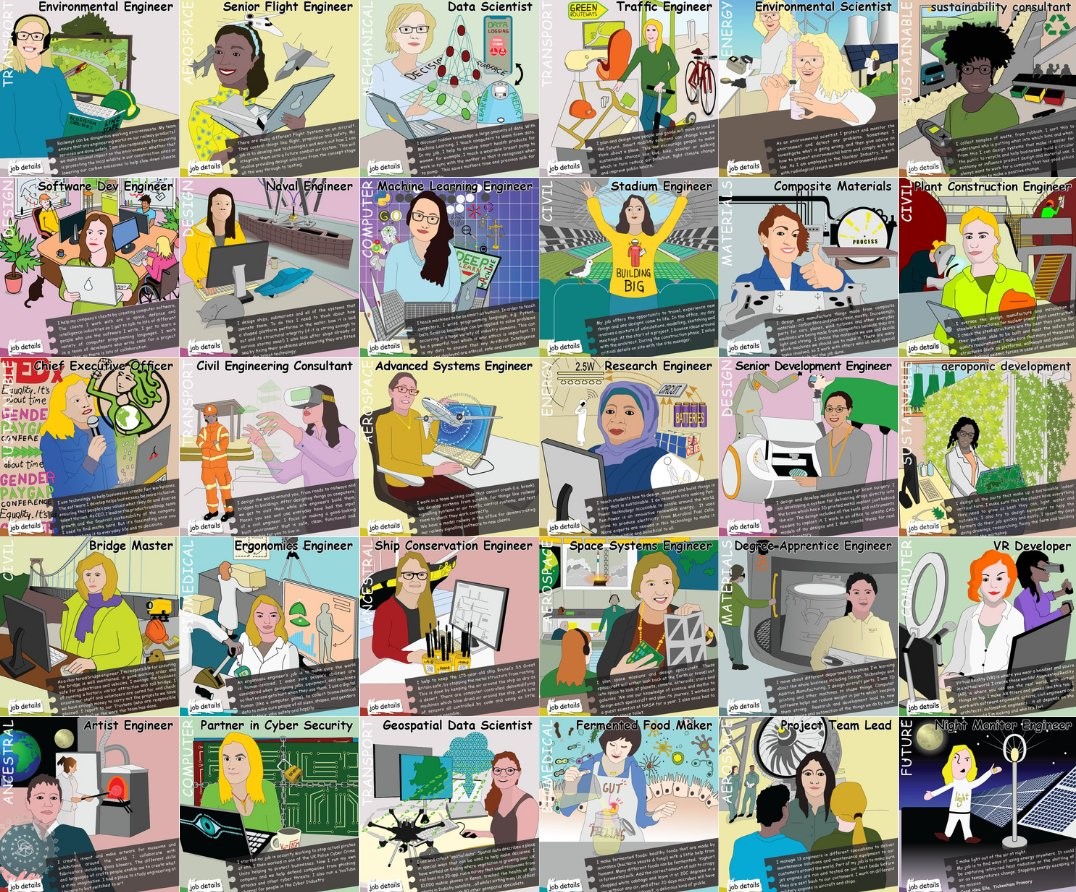 When children are asked what an engineer is, and what they look like, it can often be a tricky question.  They may jump to the image of an engine mechanic, or a man in overalls with a spanner and a hard-hat.  They may also have trouble recognising familiar jobs as coming under the umbrella of engineering.

Engineering is defined as ‘working artfully to bring something about’. More literally, it is the application of science and maths to solve problems. And it’s a career that is more relevant than ever – to achieve net zero and a low carbon global economy, everything we make and use, from aircraft to cars, batteries to wind turbines, will need to be completely re-imagined and re-engineered.

When a child does not personally know an engineer, or does not recognise the role of engineering in solving the problems faced by a society, then this notion of an engineer becomes more removed from their view, and critically, from their career aspirations.  In science communication, we encounter children with low science capital throughout our work.  So how can the children dream of becoming an engineer, if they don’t know what one is?

You can’t be what you can’t see

It is difficult for children to imagine themselves in that job, when the engineer does not look like them.  Encouraging girls and children from minority ethnic groups into engineering careers, and STEM careers more broadly, is a key focus of the DETI Inspire team working out of UWE.

In collaboration with My Future My Choice, as well as many local engineers; the DETI Inspire team at UWE have developed the Engineering Curiosity cards and lesson resources for schools.  The aim is to bring the diversity of the West of England’s amazing engineers into the classroom and enthuse and inspire both primary and secondary pupils.  Through not only learning about what an engineer is and recognising their role, but also introducing them to real-life local engineers that may come from similar beginnings, so that they can start to think of engineering as something that could be for them!

Engineering Curiosity is a collection of 52 cards, based upon 52 local engineers in a wide variety of different roles and industries, in a kind of ‘Top Trumps’ meets ‘Happy Families’ style game.  The engineers featured have also each produced an engaging TikTok style video, giving a fun snapshot of their role and their route into it.  The project has developed lesson plans, curriculum linked worksheets and activities, and school-wide assemblies to accompany the cards and videos, all to aid schools in running sessions that involve the real engineers joining them live in the classroom through video link.

During the recent British Science Week, local schools around the West have been taking part in DETI’s ‘Big Beam In!’, bringing the sessions to life and reaching over 3500 pupils.  Some of which may just be the West’s future engineers!

Looking to inspire in your science communication, or want to check out all the engineering roles for yourself?  You can find the resources, lesson plans and cards on the Curiosity Connections website.

DETI Inspire builds on the success of previous projects founded and launched in the Science Communication Unit (SCU) at UWE Bristol, including Curiosity Connections – the network for inspirational primary STEM education in the West of England, and Women Like Me – a tiered mentoring project for women engineers. The project is led by Dr Laura Fogg-Rogers and includes Ana Bristow, Sophie Laggan and Josh Warren from the SCU.