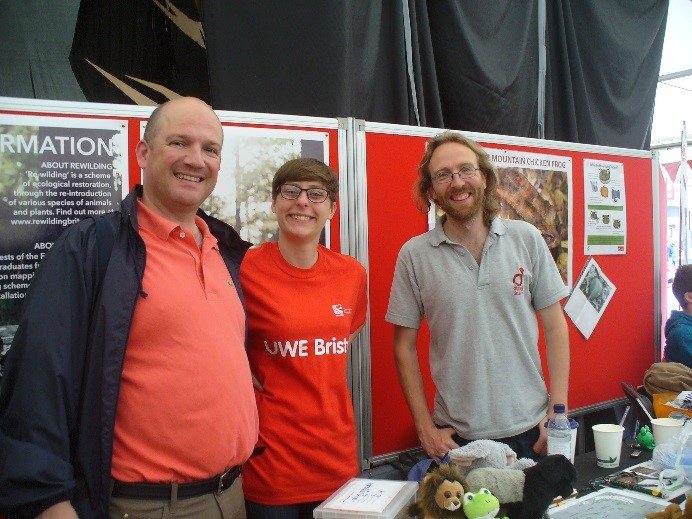 SCU was well represented at the Bristol Festival of Nature (BFON) in June, with Associate Professor Emma Weitkamp manning the Drought Risk and You (DRY) stand on Saturday and MSc student Hannah Conduit showcasing her research with the Durrell Trust as part of UWE’s festival tent.

Emma is exploring communication and engagement barriers and enablers related to drought and water scarcity within the DRY project. At BFON, Emma was interested to hear what visitors think about a set of cartoons produced as part of the project and whether these might be a tool to open conversations about water scarcity; climate change models suggest the UK will have wetter winters and drier summers, increasing the risk that we will have serious droughts. . In the southern UK, the most severe in living memory is the drought of ’76.

Frogs are not the cuddliest of species, so Hannah is tackling similar challenges through her research with the Durrell Trust. Amphibians have suffered a dramatic decline in numbers, and around 40% of all amphibian species are now considered to be under threat. But in a world of glamorous tigers and cuddly lemurs, it is sometimes hard for frogs to get a look in.

Hannah’s research focuses on one particular species of frog; second largest in the world and perhaps one of the most endangered. The ‘Mountain Chicken’ is aptly named for its meat; prised locally as a delicacy with taste and consistency similar to that of its feathery cousin.

With less than 100 individuals remaining in the wild and continued threat from disease, the Durrell Trust and UWE are working together to find more effective ways of communicating the plight of amphibians like the Mountain Chicken.

At BFON, Hannah and her Durrell supervisor, Jeff, along with a small group of volunteers talked with the public about the Mountain Chicken’s story, as well as showing them some of the methods used by scientists and researchers to monitor the remaining wild frogs. Scanning the stall’s microchipped frog plushies and swabbing them for a fungal disease called Chytrid proved to be the weekend’s most popular activities.

Research is currently ongoing for Hannah’s project, and will culminate in a handbook for use by the Mountain Chicken Recovery Programme in raising awareness and gathering interest amongst the public for the species.