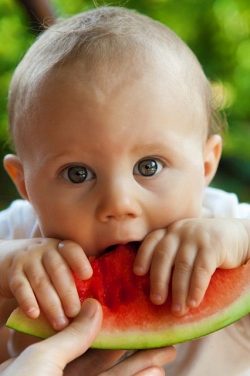 How we make choices as consumers, patients, parents and members of the public has, of course, long been of interest to science communicators, and topics like immunisation can continue to raise differences in perspectives, as well as media interest. A few years ago we started to think about the sometimes challenging process of weaning a baby. Ruth had recently had two young children herself, whilst completing her MSc Science Communication with us, and I’d been doing some research with parents and caregivers in community groups, so we knew weaning was a topic that was being discussed. But what about the parents who might not be out there in these social spaces, what was happening online? We asked the question ‘how do people on Mumsnet frame media coverage of weaning?’

As our starting point we considered a review of scientific evidence published in the British Medical Journal in 2011. This work, by Fewtrell and colleagues, suggested the period of exclusive breastfeeding recommended by the World Health Organisation be reduced from six months to four. Unsurprisingly the study attracted media attention, particularly in ‘quality’ newspapers like The Times, The Guardian, and especially, The Telegraph, and was frequently reported on by specialist health and science correspondents. They tended to talk about ‘risk’ but rarely contextualised that with further information on the study itself.

On Mumsnet it was clear that a vibrant community was keen to discuss the issue of weaning, and we located 112 comments that directly referred to the Fewtrell example and its media coverage. What were people most wanting to talk about? The inaccuracy of media coverage really stood out in their comments, as well as frustration that it was returning to the breast vs. bottle aspects of the debate. And the forum discussions often presented more context, nuances around the question of ‘risk’ and the details of the study itself. Of course, they had more room to do so, but it was interesting to see these types of details being discussed.

What does this tell us about science, the media and how it’s discussed online? Well it suggests that at least amongst this very small sample of Mumsnet users there is some awareness of the weaknesses that can be present in science and health reporting, but also that people often use scientific and personal information in transitionary means, embellishing some of the deficiencies of media coverage in interesting and new ways. As people become more and more reliant on social media sources for information, further work is needed on how this is supplementing and challenging our relationships with scientific and medical expertise but also how we use our social networks to support decision making. You can find out more about this work in a recent Journalism article or at: