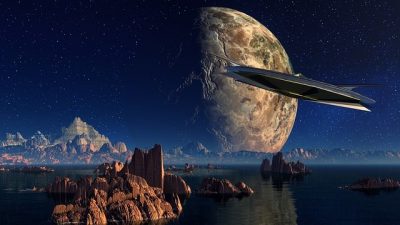 Science fiction and fantasy films like Star Wars, The Hunger Games and Interstellar are hugely popular, with a reach for which many science communicators can only dream; particularly as these films typically reach beyond our usual audiences. But what if we think about these films as science communication examples in their own right?

It seems that science communication researchers are beginning to do just that. I attended two conferences in 2015 that explored this theme: Stories about Science: exploring science communication in entertainment media at Manchester University, UK in June and International Science in Popular Culture at Alpen Adria Universität, Klagenfurt, in Austria, in September. I was struck by the wide range of examples put forward of films with high quality science content – from Soylent Green to the Theory of Everything. Speaking in Manchester, Kevin Grazier, a planetary scientist, explained that Hollywood increasingly employed scientists as consultants on these (hopefully) blockbuster films. He did point out that while a consultant can influence how science is presented, they do have to be prepared to compromise.

David Kirby of Manchester University (organiser of the Stories about Science Conference and a speaker at the International Science in Popular Culture Conference) argues that scientists and some science funding agencies see popular culture as both an opportunity to stimulate popular interest and knowledge about science, and a threat to public understanding (e.g. if the science is incorrect). Given the interest and concerns raised by David Kirby, what do we know about the impact of science fiction films? The answer seems to be ‘not a lot’.

Searching the literature, I found studies of the impacts of science fiction films on children in schools (e.g. Lin et al, 2013; Arroio, 2010) suggesting that there is some interest in the potential of science fiction film and TV as a teaching tool, but few studies of ‘films in the wild’ or with adult audiences (i.e. studies of cinemagoers). Instead, much of the research on science fiction films seems to focus on content. This approach mirrors many studies of media communication which explore how science is portrayed in the newspapers and how accurate the content is, rather than its impact on readers.

Amongst the rare studies of science fiction films ‘in the wild’ are Lowe et al.’s (2006) study of The Day After Tomorrow. This study asked why cinema goers went to see this film, and found that only 5% were motivated by the environmental content. Actually, I find it surprising that as many as 5% state this, perhaps raising questions about how you ask audiences about their motivations. Nevertheless, Lowe et al.’s study provides some interesting insights into the potential of science fiction films as science communication. They conclude that films reach new audiences, not otherwise primarily motivated to engage with climate change, that films can raise awareness of issues and also that the audience is sophisticated – they recognise this type of film as fiction but also connect content with pre-existing knowledge.

Lowe et al.’s study, and the conferences, open many questions about the potential role of science fiction films as science communication. The wide reach of films and the mixed audiences they attract suggest they could have far reaching impacts on audiences, though Lowe et al.’s study highlights that these audiences read such films in sophisticated ways. Simple content analysis can only tell us what and how the science is presented; more sophisticated research is needed to understand the impacts on the public.

Dr Emma Weitkamp is Associate Professor in Science Communication at the University of the West of England.

You can read more about the International Science in Popular Culture conference at: http://jcom.sissa.it/sites/default/files/documents/JCOM_1403_2015_E.pdf