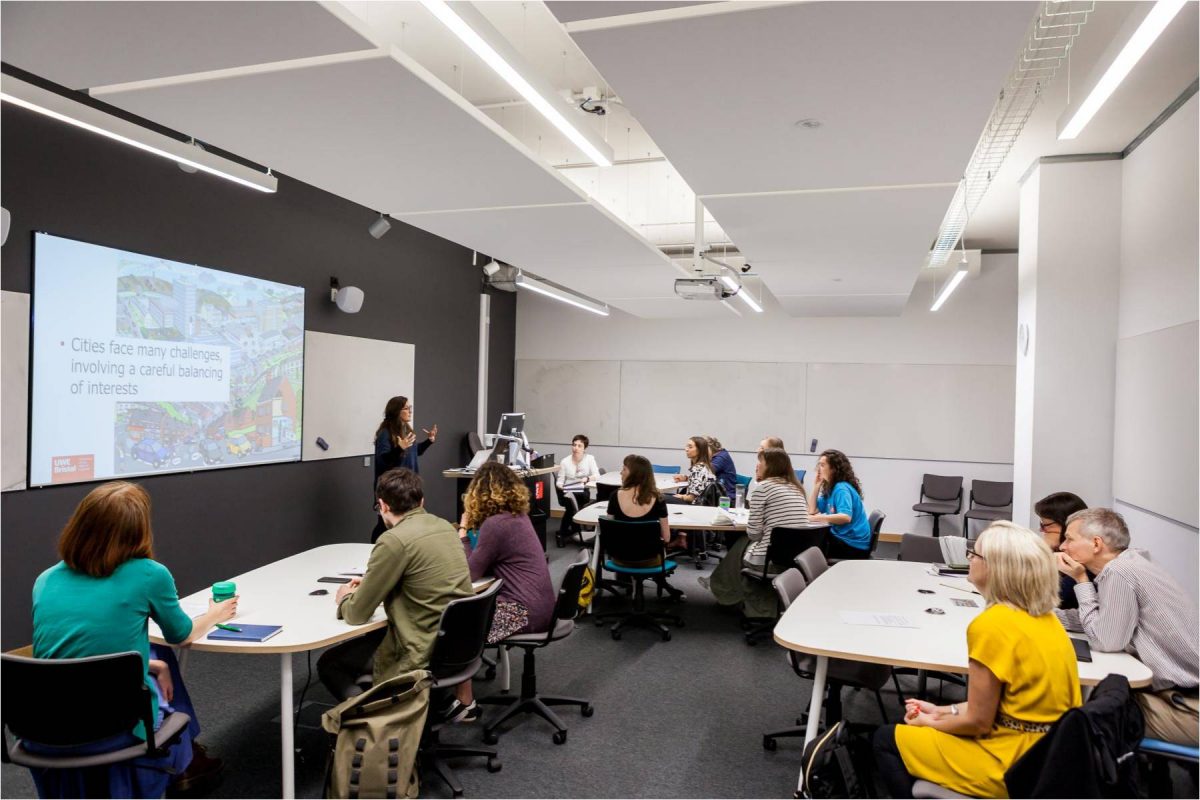 I’ve never decided the fate of a large slice of land before, fictional or otherwise. Stepping into the shoes of town planners and developers at Sci Comm South West 2019, participants in the workshop ‘Can you solve the city’s sustainability dilemma?’ were given the opportunity to explore the decisions that need to be made when considering urbanisation, city growth and the all-important sustainable development goals (SDGs).

Ruth Larbey, a Science Communication Unit (SCU) expert in communicating science to environmental decision-makers, gave us a simple brief. We had two minutes to make an elevator pitch (as in, the time it takes for a long elevator ride) to convince a representative of the fictional city, Swester, that our vision for a newly available two acres of inner-city land was most suitable for the needs of the city and its residents.

We were split into groups and given an idea to pitch. I found myself in the camp proposing the building of a new leisure center. However, we were up against fierce competition in the forms of: a business incubator, a renewable energy company, a community farm, and housing developers.

The UN’s SDGs had to be considered and we had to pitch how our idea would best integrate ecosystem and biodiversity values, contribute to sustainable urbanisation and best provide for the local community. We were to use our powers of persuasion to convince the city authorities that ours was the best use of the land for the sustainable growth of the city and would best improve the health and welfare of its residents. Before we started our pitches, we were also given the following information about the city of Swester:

Considering the above problems, here are the pitches proposed by each stakeholder group:

As housing developers, Orchard Housing unsurprisingly suggested a new local development. They promised 30% affordable housing to fill the gap in the market and suggested a shared community allotment to maximise green space. The houses would incorporate renewable designs and architecture in line with the SDG of integrating ecosystem and biodiversity values into local planning.

Shipshape Renewables suggested the land would be best used as a solar farm. They wanted to turn industrial land into business space and work alongside Swester’s growing tech sector to develop the city into a green business hub. Their aim was to move the city towards being carbon neutral and providing local fuel discounts to help alleviate fuel poverty.

Swestershire Sports were pitching the idea of a new sport and leisure centre. Their argument was that a sports center would improve the physical and mental health of the population of Swester, thereby relieving some of the pressures of an unhealthy and increasing population on the local hospital. They suggested school schemes and discounts for residents who would not otherwise be able to afford membership.

Temple Seeds are a community group interested in food growing. They proposed that the land would be best developed into a community farm to address the lack of green space and improve air quality, local food production and community isolation. The farm would be a hub of growing knowledge and organise food swaps as well as allotments and an education center to teach children about food.

The business hub wanted to bring jobs to the local economy. They suggested a business park of remodelled shipping containers, highlighting that it would bring more jobs within walking distance, thus reducing residents’ reliance on cars for transport and alleviating air pollution in the process. The park’s design would be in keeping with the SDGs and would provide some, if not all, its power from green sources.

Each potential stakeholder group was also given the opportunity to choose one other group to partner up with and share the development space. Given the city’s lack of green space, most groups chose to pair with Temple Seeds, as they felt a community garden could be the most easily incorporated into their design.

What I found most interesting about this exercise was considering not just the immediate benefits of each idea for the land, but also the benefits from every angle, and then trying to cram all those benefits into just two minutes of talking.

We realised that the communication of science and policy is what would make or break our pitches for the land, and so had to really think hard about how to maximise all the ways in which our ideas fitted the needs of the community and the requirements of the SDGs. It made us appreciate how precious development land is, particularly with increasing populations and scarcer resources.

Deciding a winner was difficult. All pitches were made convincingly, and all had their own merits for the community and for the environment. They also all had their own challenges in implementation, but in the end the best pitch won – I’ll let you decide which that one was.