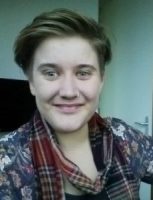 Previously, I have worked professionally in science communication, primarily coordinating the STEM Ambassador and Nuffield Research

Placement programmes in the North East of England. I have come to the Science Communication Unit after completing a PhD at the Artificial Intelligence Lab at the VUB in Belgium, and a PostDoc at the Max Planck Institute for Psycholinguistics. My work throughout both my PhD and PostDoc was primarily on the evolution of linguistic structure. One method I have used in my research is cultural transmission experiments in the lab.

These experiments investigate how language (or any behaviour) is changed as a result of being passed from one mind to another in a process similar to the game “Telephone”. One person’s output becomes the input for a new person, whose output is fed to a new person and so on! This method is being used more and more to look at processes of cultural evolution, and I am interested in using these methods to investigate processes in science communication.

Using experiments to investigate how stories and information are culturally transmitted isn’t new. As far back as 1932, Bartlett’s book “Remembering” describes experiments that looked at how transmission of a memory from one person to another can affect what information persists, and what is forgotten through a failure in the transmission process. More recently, Mesoudi et al. (2006) used similar experiments to systematically investigate whether information is transmitted more faithfully when it is embedded in a narrative around social interactions compared to equivalent non-social information. I am keen to explore these findings in practical contexts in science communication, for instance looking at how well information persists from scientific article to press release to media story as a result of different types of content in a press release.

The internet is the home of the “meme” a culturally transmitted idea (this could be any idea, picture, video, gif or hashtag). New methods from big data analysis are being used by scholars interested in cultural evolution to explore the proliferation of memes, and this is even starting to happen in science communication too. Veltri & Atanasova (2015) used a database of over 60,000 tweets to investigate the main sources of information about climate change that were proliferated on twitter and the content of tweets that were most likely to be retweeted. They found that tweets and text with emotional content was shared more often. These findings fit with the findings from Mesoudi et al. (2006) above, demonstrating that multiple sources and methods can be used to accumulate evidence on what it is that allows scientific information to be a) transmitted in the first place, and b) transmitted faithfully.

Another hot topic in cultural transmission is the role of innovation and creativity in the transmission of information resulting in an accumulation of information. Caldwell and Millen (2008) investigated this process using an experiment whereby participants were asked to build the tallest tower possible using just dried spaghetti and blue tack, or the paper aeroplane that flew the furthest. Participants were able to see the attempts of people who had gone before, giving them the option to copy a design that had already been tried, or innovate a new design. The study found that participants got better at building successful towers and aeroplanes later in transmission chains than earlier, indicating that successful engineering skills were being acquired just from the process of cultural transmission. This, of course, is a brilliant finding in its own right, but there is a huge amount of scope for using this paradigm to investigate what affects cumulative cultural evolution in the context of issues relevant to science communication. For example, does explicit learning or simple imitation affect rates of innovation and success? This question has previously been explored using cooking skills in Bietti et al. (2017) and paper aeroplanes in Caldwell & Millen (2009). You can also use these methods to investigate questions about whether the characteristics of the person transmitting the information plays a role in faithful transmission or innovation (e.g. their gender, age, perceived authority, etc.).

Together, I think these case studies of existing literature outline the scope of methods and insight available from the field of cultural evolution to questions in science communication, and I look forward to working with the unit at UWE to generate some new research in these areas!