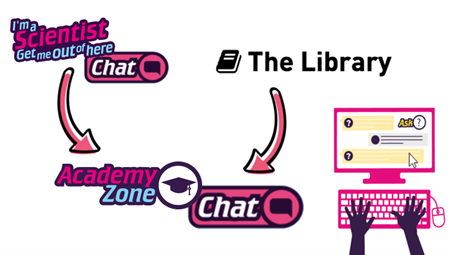 This blog post is part of an exhibit for Engage Conference 2021.

“I’m a Scientist, get me out of here” is an online communication activity where school students interact with scientists. Classes of students ask scientists about their work and lives in a live, text-based, fast-paced chatroom, as well as on a question-answer platform which allows for more considered interactions.

Over the 10 years it has run, scientists have often reported that their communication skills have improved through participation in I’m a Scientist. However, this experiential training has never been formalised, and the scientists aren’t always aware of what they are learning. As such, in 2019 a short communication course was designed to run alongside the I’m a Scientist event.

We evaluated the course using the responses scientists provided throughout the course to analyse their reflections and understanding. Data from 11 scientists, who gave their consent to have their responses analyzed and presented in this work, showed reflections around the themes of raising science capital, providing an inclusive environment for all students to ask questions and engage, and also an inclusive environment for the scientists participating too.

Scientists felt that the I’m a Scientist format worked to help the students lead the conversation to be about what interests them, and also to see the scientists as humans with lives and interests outside of science. This linked nicely to resources about science capital, as linking science to your interests or seeing scientists as sharing your interests can help students see that science could be for them (Archer et al., 2015):

“I like that we are not expected to tell the students about science and being scientists – sometimes it could seem like we are talking at them rather than them being able to find out what they really want to know. In this case, they are asking what they want to know, which probably isn’t what I would have talked to them about if I were to lead the conversation. That has been really eye-opening! “

“Often, in other outreach activities I have done previously, they would still emphasise your role as scientific expert, but not as human being with interests, hobbies, doubts and dreams.”

Scientists felt that the text-based, anonymous format worked to create an equal playing field between the scientists and students, and also among students, giving them the ability to all have their questions answered and preventing barriers for students who may be shy or anxious about asking something:

“Loud students don’t dominate our attention, and quieter, shier students can get their question across as equally as anyone else. Also, with anonymised names in the live chat, I don’t spot patterns of the same people talking to me all the time –  the pseudonyms aren’t memorable.”

“I think the text-only format helps in various ways. From the student perspective, it means that participants who might be shy or anxious about speaking in public have an opportunity to ask a question without having to actually vocalise. Students can prepare in advance exactly what they want to write, and the anonymous nature of the interactions frees students to ask anything they like without fear of embarrassing themselves. It also gives students a chance to digest the scientists’ answers at their own pace, and go back over things if they want to. From my perspective, it means that all the questions “look the same”: I won’t end up devoting all my attention to the loudest or most persistent voices in the room.”

There was also evidence that the text-only format made the chats feel more inclusive for the scientists too:

“I think the anonymity of the live chats helps immensely. It allows students to ask whatever they’d like, be it science or not, whilst removing the fear of asking a silly question in front of their classmates or even to you directly. I think being behind a screen/giving text answers works well for the scientists too! Just having a profile photo and not video chat removes a lot of visual biases – I’d be rich if I had a pound for every time someone has told me I don’t ‘look’ like a scientist! But with just the profiles, you ARE a scientist, and everyone was asked questions equally.”