In a recent book review for JCOM, I outlined a few of the ethical, social and legal issues that make synthetic biology a potentially fascinating topic from a public engagement perspective. ‘Synthetic Biology Analysed’ (Englehard, 2016) draws together contributions from experts in ethics, law, risk analysis and sociology. In doing so, it provides a fairly accessible discussion of the nature of synthetic biology – what the field encompasses and how we might think about different types of synthetic biology (from those that are essentially developments of genetic engineering to approaches that incorporate non-naturally occurring nucleotides (components of DNA)). These raise different challenges when it comes to assessing risk, for example to the environment, posed by these developments.

Shortly after reading Englehard’s (2016) book, I had the opportunity to explore synthetic biology further, through a participatory theatre project – Invincible – initiated by the University of Bristol’s SynBio group and produced by Kilter theatre company. Both Englehard’s book and ‘Invincible’ the theatre production point to a need for public engagement in this area.

Speaking to the members of the Invincible production team, I learned much about the process of developing this work and the learning curve that had to be climbed in order to understand the research. Kilter were also keen to address other STEM issues, such as presenting women as scientists to counter gender stereotypes.

One aspect of the performance I found particularly refreshing was the way that actual researchers were included. They may not have had ‘acting’ roles, but they were present throughout and engaged in discussion with the audience at the end of the performance (when their presence was revealed). Their inclusion, and the setting of the performances in a flat both worked to highlight the pervasiveness of science in our lives.

In a chapter focusing specifically on public engagement in Synthetic Biology Analysed, Pardo and Hagen point out the low salience of synthetic biology with the public. While this is not uncommon, with many scientific topics taking place silently and behind closed doors, the potential impacts (social and environmental) of synthetic biology highlighted in Englehard’s book suggest it is time for a public discussion. It is nice to see that University of Bristol’s SynBio group are beginning to hold this conversation. 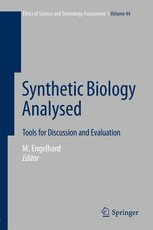