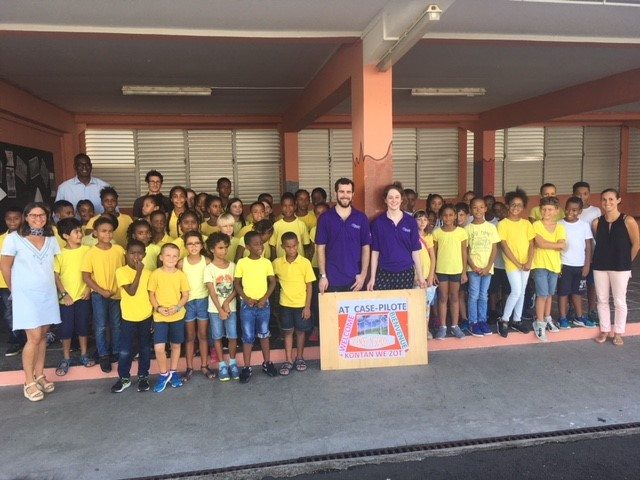 The Science Communication Unit supported three successful bids to the British Council to participate in their Science in Schools initiative. Alongside sending Robotics PhD students and BoxED interns to France to run two weeks of activities, former BoxED interns Jack Bevan and Katherine Bourne were invited to deliver a week’s worth of engineering workshops in Martinique, a French department in the Caribbean.

In January 2018, Jack Bevan and I were invited to deliver a week’s worth of engaging STEM workshops (in English) to primary school children in Martinique as part of the Science in Schools initiative.

Having worked together at the University of the West of England (UWE, Bristol) for the past two years on a similar outreach project, we both accepted instantly and ideas began to form in our minds. First thing’s first: which project to choose?

Globally we are becoming more and more dependent on renewable and sustainable energy. Wind turbines are an icon for clean energy, and also, it turns out, pretty fun to build out of recycled materials.

Our aim was to invite the children to consider the impact that we as humans have on our planet, and also to begin ‘thinking like an engineer’. That is: focus on your objective and try, try, and try again.

Having designed central hubs and provided DC motors to measure any potential voltage generated, it was now up to the children of eight different schools in Martinique to design and produce their very own turbine. The competition began.

On arrival, we were warmly welcomed by Catherine Ciserane (Academic Delegate for European and International Relations and Cooperation) as well as the exotic sights and sounds of the beautiful Caribbean island of Martinique. Once I had confidently conquered driving on the right (wrong) side of the road, and settled into our hotel, it was time to visit the first of our many schools; Ecole Constant Eudaric.

It has to be said that we were absolutely delighted with the warmth of our welcome from all of the schools that we visited that week. Students were rushing to us immediately with greetings in English, and offers to help carry our heavy equipment. Teaching staff were equally enthusiastic and hospitable, ensuring we had plenty of delicious fruit and sugarcane juice, as well as pastries and chocolates (a staple component of every teacher’s diet).

Once teaching began, we were impressed with the students’ levels of English, and the confidence with which they spoke. Some pupils at Case-Pilôte school had even prepared a welcoming song for us in English, as well as a message of thanks to send us on our way.

At the beginning of each of our workshops, we set the scene for the children. Imagine a world where there was no electricity, and it was your job to make your own energy using only whatever materials you had available to you (in our case: cardboard, egg boxes, and plastic cups).

Once the scene had been set, students rushed to begin building their designs, taking inspiration from other wind turbines around the world. Each and every workshop is different and we are constantly amazed and impressed with the originality of the designs that the children produce.

Using a multi-meter, we are then able to test the amount of electricity (volts) generated by the various turbines. Although some students were disappointed to find their turbine didn’t turn, they had ample opportunity to refine their prototypes and return for another test, often racing to front of the queue!

After some time, our mini engineers were able to generate upwards of 40V electricity. Enough to power an LED light, and even charge a mobile phone (how else could you check your social media during a power cut?).

As well as working with school children, we also had the opportunity to provide a ‘Master Class’ for a collection of professional science communicators and educators across Martinique. We were able to share with them the challenges in STEM that we have faced and the ways in which we can overcome these problems together.

We found that the adults got very into our turbine workshop – it was literally battle of the engineers – but were unsuccessful in beating one child’s high score of 47V!

We received very positive feedback from everyone we encountered, and have faith that our passion and enthusiasm for such a critical and pivotal subject has been instilled into all of the schools we visited.

We are very thankful for this opportunity and would like to encourage any others to embrace the adventure and show their support for the Science in Schools initiative.

Katherine Bourne is a biologist specialising in science communication. She has worked at the University of the West of England for three years, designing and evaluating engaging science workshops for students across the South West of England. She is hoping to complete her secondary school science teacher training in 2019.

Jack Bevan is a mechanical engineer with a passion for widening participation in all STEM subjects. Based at the University of the West of England for two years, he is committed to delivering fun science workshops in both the school and community setting.