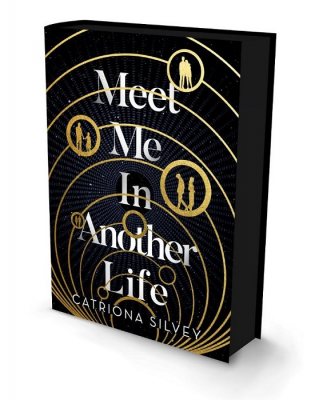 In science communication, we often talk about science capital: the concept of feeling like science is “for me” as a result of sum of all the experiences and resources we’ve encountered that build up an interest in science. Everything from having parents in science, being taken to science-related events and having just one excellent teacher can change our lives to one where we pursue a career in STEM (science, technology, engineering, maths).

It’s sometimes difficult to work out exactly what might have pushed us into ambitions within science as a child, especially as we don’t know what we would have ended up doing if it wasn’t for that one teacher we had, or we had been ill the day the school trip went to the science centre. But what if we did have the opportunity to live our lives over and over again? We’d be able to work out exactly what it is that leads to the career paths we take. This is exactly what happens in Catriona Silvey’s “Meet Me in Another Life”, a soft sci-fi novel coming out on 8th July 2021. The novel follows two protagonists, Thora and Santi, who share the same preoccupation with science, the stars, and astronomy. They live their lives over and over, with each chapter painting them in a different relationship (e.g. friends, parent/child, teacher/student, colleagues, lovers, doctor/patient, etc.). In each life, they’re the same people, but due to different circumstances and relationships they don’t always end up following the same careers. Their careers are usually science-related, but not always, and it’s interesting to think about where they end up in their lives through the lens of science capital.

I recently interviewed for Catriona Silvey for The Cosmic Shed and asked her about science capital. In her answer she lays down barriers resulting from internal, personal struggles, interpersonal relationships, and structural barriers in our society. She said: “I realised that I’d written book about these two very driven, very passionate people who mostly repeatedly fail to achieve their dreams.”

“Barriers can be very different for different people depending on their circumstances. Thora’s problem, especially towards the beginning of the book, is that she feels like she has too many choices. Which is quite a privileged position to be in, but it means she sort of ends up sabotaging herself, because quite often she won’t pick the thing she really wants to do because, fundamentally, she’s scared she’ll fail at it, and there’s nothing worse than failing at the thing you really, really want to do. So that’s very much a personal, internal barrier.”

“Another barrier for her is her parents,” Silvey goes on, “her parents have a very fixed idea of the person she is and what she should focus on, and it’s the humanities. And that, in some of her lives, really strongly influences her.”

“Santi’s problem is kind of the opposite of Thora’s problem in that he has a lack of opportunities. He’s a man and he’s straight, but on every other access he has less privilege than Thora has. His parents are working class, whereas hers are professors. He is not a native English speaker, whereas she is. Thora’s family are usually immigrants by choice, whereas Santi’s family are immigrants through economic necessity. For all these reasons, he often doesn’t have the opportunities he wishes he would have, and so his barriers are a lot more structural.”

While investigating what leads us into our careers certainly isn’t the central point of the book (the most pressing theme is really the need to find out why the protagonists are stuck in a time loop), I think for those working in science communication, Meet Me in Another Life offers an interesting meditation on science capital, giving us an experiment we can’t do in real life and wrapping it up in a vivid, gripping, beautifully-written novel.

You can listen to the podcast here: