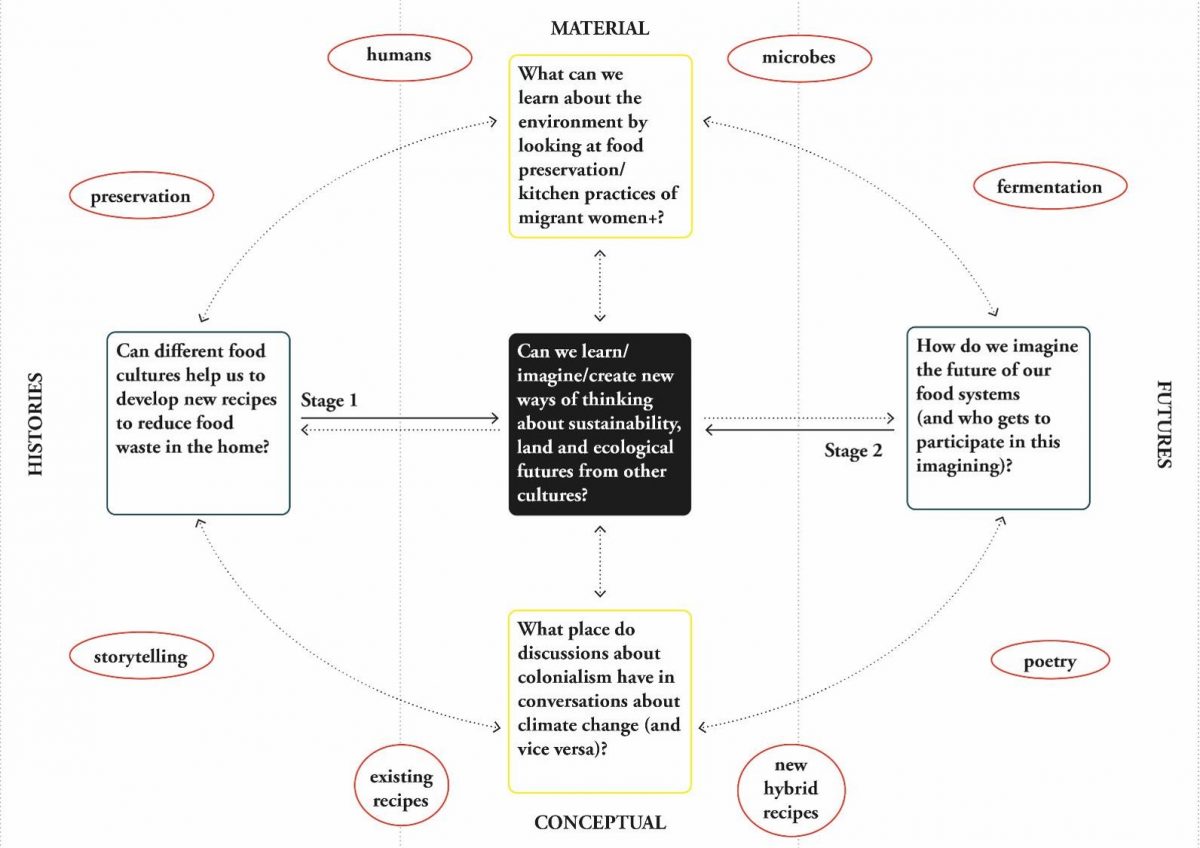 These are some of the questions that have emerged through Kitchen Cultures, a project that has been developed with the Eden Project’s Invisible World exhibition during lockdown as part of a remote residency. In collaboration with six migrant women+ of colour (all from formerly European-colonised nations) and no-waste chef Fatima Tarkleman (herself a first generation migrant of mixed Nigerian-Ugandan-Pakistani heritage), we created a process to gather existing recipes that referenced the diverse cultures, knowledge and experiences of our participants, and to develop new recipes that that could be used to reduce food waste in the home.

By creating new collaborative recipes that utilised preservation techniques to keep or extend the life of locally grown/available ingredients, this project seeks to:

Food waste in the UK

In the UK we waste over 70% of food waste post-farm gate in the home (6.6mT annually), although many households have adopted behaviours that reduced this during the pandemic. At the same time, COVID-19 has exposed major inequalities in the UK food system, and left millions living in food insecurity. However, it is important to note that the vast majority of food waste happens at the industrial scale due to exploitative and extractive agricultural systems.

As such this project does not intend to use these issues in order to justify the sticking plaster of reducing food waste in the home as an answer to systemic food inequality. It is possible to cheaply preserve foods at home if you have time, money, resources and knowledge to do so, and some of the outcomes from the project will enable you to do so more effectively. However, in order to properly address food poverty, we need agricultural and hospitality policy that supports a resilient food system, and the political will to create a more just and equitable society.

As a collective, what we feel is important is to think about ourselves and our food systems as implicated within an ecological system that is currently facing a major crisis. The primary aim of this project is to pluralise conversations about climate change and sustainability by drawing from the knowledge, experience and values of diverse cultural imaginaries. The practice developed thus sought to acknowledge and honour the ways in which ecological knowledge is held and communicated in families and communities through our food traditions, and to learn from them in order that we may find new ways to live ethically in a world that we share with multiple species.

Industrial agriculture is one of the biggest drivers of climate change, contributing to emissions, fossil fuel extraction and deforestation. Global agricultural systems destroy biodiversity and create dependencies on industries such as GMO seeds and livestock, fertiliser and machinery which has created billions in farming debt. In the exchange value system, where fossil fuels were conceived as a direct replacement for slave labour on the plantation and in the factory, the bodies of black and brown people and land continue to be seen as cheap resources to be extracted for profit. Climate change as we currently understand it is implicitly constructed through the logics of colonialism, and explicitly maintained through the infrastructures of racial capitalism.

People in the global south are more likely to be living the direct effects of climate change (flooding, drought, biodiversity loss, crop failure), despite contributing the least emissions. One of the primary threats to human life due to climate change is food insecurity, yet the 10 most food-insecure countries in the world generate just 0.08% of total global CO2. The 50 least developed nations of the world have contributed only 1% of global greenhouse emissions in total. The Global North is responsible for 92% of carbon emissions, yet instead of addressing this debt, climate change campaigners Europe and the US often frame the responsibility for the ecological as shared by all humans equally, and advocate for deeply racist ideas such as population and immigration control.

All of us involved in Kitchen Cultures are from countries that are living the legacy of colonisation in terms of the resources, people and land that have been extracted, and which formed the basis of the wealth that in the UK. Colonisation was an ideological project that reshaped the bodies, minds and lands of colonised people, and its legacy of globalised capital and cheap industrial labour is one of the main drivers of climate change today. The legacy of colonisation on the wealth, land and other resources in our countries of origin meant many migrant families moved to the UK to provide better opportunities for their children; we come from cultures that think intergenerationally, and as a result we tend to waste as little as possible (food or otherwise).

We know that there’s knowledge in diaspora communities that isn’t always visible to outsiders; our recipes tell the stories of who we are, of where we are from, where we have been, and where we live now; and the climates, resources and species we’ve encountered along the way. We wanted to create a space in which our participants could tell their stories, in their own words, or through their own practice(s) in a space in which they are the experts, their kitchens.

Over six weeks we worked remotely with our collaborators to develop recipes, and to tell stories, through poetry and through food. By working with diverse food preservation knowledge in partnership with holders of that knowledge from diaspora communities in the UK to develop recipes and processes, we wanted to invite ways of thinking sustainability and ecology from the perspective of different cultures (human, ecological, microbial). Starting as a simple recipe development exercise, it evolved into a community storytelling and recipe sharing project that, as a result of COVID-19, has predominantly run remotely on Zoom, Whatsapp, Instagram, and via discussions over the phone.

We were extremely lucky in this unprecedented time to get some funding from Eden Project to do this work, so we were able to facilitate access to the project through bursaries, and to cover all associated costs, including for home filming equipment. The recipes and stories that are the outcome from this stage will become a series of documents and workshops which will then be shared with communities around the UK via the Eden Project’s community outreach program. As they are shared, we expect that these recipes will evolve/adapt/respond to their context, and participant stories and recipes will be enriched through this network of cross-cultural sharing across the UK.

COVID-19 and connecting to others

We are living through extraordinary times; however, this moment offered us an opportunity: to address social isolation in marginalised communities; to think about and act differently towards nature; to learn from and value different ways of knowing the world; and to do all of this in solidarity with each other. By engaging communities (human and other) traditionally left out of debates about the future of science, technology and ecology, we might begin to address some of the systemic (racial, gendered, economic) inequalities in our society that have been highlighted by the COVID-19 pandemic.

Through our experience of the collective grief, confusion and trauma, we felt that it was important to create connections between communities and people who might be experiencing isolation and disconnection. After the murder of George Floyd by police in the US, and the resulting wave of protests, there was also an increased awareness about the ongoing legacy of colonialism in the form of systemic and structural racism experienced by migrants daily. It was in this moment that it felt more important than ever to create a space in which PoC/BAME/global majority women+ could talk about their experiences of migration, colonialism and race in a way that was generative, healing and respectful.

Food is one of the ways in which we care for each other in our communities, and many of us come from cultural and cosmological traditions that consider nature (land, animals, rivers, trees) as part of these communities. By working collaboratively with each other, and by drawing attention to the organisms (bacteria, yeasts) in our environment and in/on our bodies who we also collaborate with through food preservation, I wanted to create conversations about what it means to care for each other when resources and opportunities globally are scarce for all species.

We’ve just completed the first stage of research with our participants, but the work is currently still in progress. We will be running the second stage of workshops with the Eden Project later in the year, with a view to developing a recipe kit that they can share as part of the Big Lunch next year. This is the first blog post introducing the project; in the future I hope to share some recipes and poetry that we are collecting from our participants, and to talk a bit more about the process we developed to conduct the research. We are also producing a short film, which will be available to watch on the Eden Project Invisible Worlds’ site as of December.

Kaajal Modi is an artist/designer and practice-based PhD Candidate at UWE Bristol, supervised by Teresa Dillon from the Digital Cultures Research Centre, and Emma Weitkamp from the Science Communication Unit. She is interested in fermentation as a metaphoric and material practice to create cross-cultural conversations about climate, migration and justice. Kitchen Cultures is a project developed in collaboration with the Eden Project and no-waste chef Fatima Tarkleman.