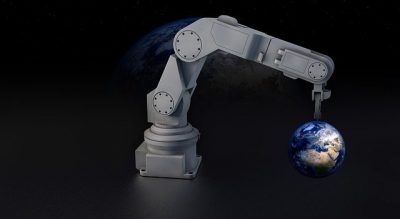 What do robots have to do with ethics? And how do you end up with the job of “roboethicist”? Prof. Alan Winfield, Director of the Science Communication Unit at UWE Bristol, explains his recent professional journey.

It was November 2009 that I was invited, together with Noel Sharkey, to present to the EPSRC Societal Impact Panel on robot ethics. That was I think my first serious foray into robot ethics. An outcome of that meeting was being asked to co-organise a joint AHRC/EPSRC workshop on robot ethics – which culminated in the publication of the Principles of Robotics in 2011: on the EPSRC website, and with a writeup in New Scientist.

Shortly after that I was invited to join a UK robot ethics working group which then became part of the British Standards Institute technical committee working toward a Standard on Robot Ethics. That standard was published earlier this month, as BS 8611:2016 Guide to the ethical design and application of robots and robotic systems. Sadly the standard itself is behind a paywall, but the BSI press release gives a nice writeup. I think this is probably the world’s first standard for robot ethics and I’m very happy to have contributed to it.

Somehow during all of this I got described as a roboethicist; a job description I’m very happy with.

In parallel with this work and advocacy on robot ethics, I started to work on ethical robots; the other side of the roboethics coin. But, as I wrote in PC-PRO last year it took a little persuasion from a long term collaborator, Michael Fisher, that ethical robots were even possible. But since then we have experimentally demonstrated a minimally ethical robot; work that was covered in New Scientist, the BBC R4 Today programme and last year a Nature news article. I was especially pleased to be invited to present this work at the World Economic Forum, Davos, in January. Below is the YouTube video of my 5 minute IdeasLab talk, and a writeup.

To bring the story right up to date, the IEEE initiated an international initiative on Ethical Considerations in the Design of Autonomous Systems, and I am honoured to be co-chairing the General Principles committee, as well as sitting on the How to Imbue Ethics into AI committee. The significance of this is that the IEEE effort will be covering all intelligent technologies including robots and AI. I’ve become very concerned that AI is moving ahead very fast – much faster than robotics – and the need for ethical standards and ultimately regulation is even more urgent than in robotics.

It’s very good also to see that the UK government is taking these developments seriously. I was invited to a Government Office of Science round table in January on AI, and just last week submitted text to the parliamentary Science and Technology committee inquiry on Robotics and AI.

You can find out more about Alan’s research and engagement on his own blog.