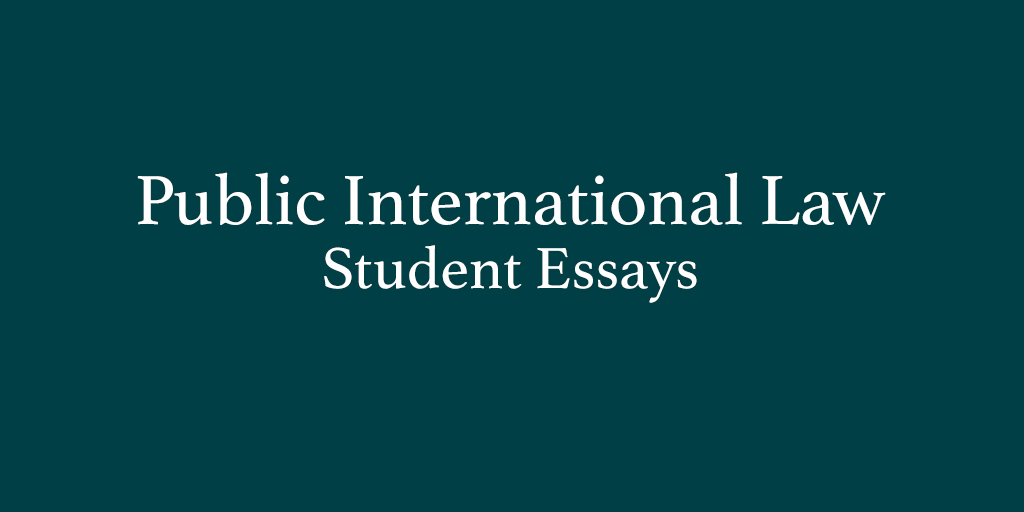 This post (edited for publication) is published on our blog as part of a series of work produced by students for assessment within the module ‘Public International Law’. Following the blogging success over the last couple of years, we decided to publish our students’ excellent work in this area again in this way. The module is an option in the second year of Bristol Law School’s LLB programme. It continues to be led by Associate Professor Dr Noëlle Quénivet. Using innovative learning and teaching methods, Noëlle developed this module to include the use of online portfolios within a partly student led curriculum. The posts in this series show the outstanding research and analytical abilities of students on our programmes. Views expressed in this blog post are those of the author only who consents to the publication.

Anti-dumping duties are additional charges imposed by a state in response to the dumping of products into the ‘commerce of another country at less than the normal value of the products’ (Article VI GATT). They are a means of neutralising unfair trade practice, allowing states to protect their domestic industry if the dumping is having a negative effect on their economy. This blog will discuss how the European Union (EU) imposes anti-dumping measures on biofuels, a renewable source of energy that until recently was seen as an attractive alternative to fossil fuels. I will discuss how the issue that lies at the heart of the dispute with anti-dumping measures is, as Burton’s article highlights, how the extent of dumping is calculated. After examining the implications of anti-dumping measures, I will conclude that they are necessarily used to neutralise unfair trade practice and maintain economic and social stability within the EU.

Process of Bringing an Anti-dumping Measure

To ensure anti-dumping duties are imposed to counteract unfair trade practice, the process of imposing duties is heavily regulated. Accordingly, Article 1 of the  Agreement on Implementation of Article VI of the General Agreement on Tariffs and Trade 1994 (ADA) requires all investigations to be initiated and conducted in accordance with the provisions of the ADA. Whilst the World Trade Organisation (WTO) does not regulate the initial act of dumping, it is responsible for regulating the process a state must follow when initiating an anti-dumping measure. If, for example, the EU believes products are being dumped into its market it must first be able to show that the dumping is taking place. In doing so it must be able to calculate how much lower the export price is in comparison to the home market price and show that it is causing injury or threatening to do so. The high threshold for establishing the injurious effect of the dumping accompanied by an investigation (see Article 5 ADA) seeks to ensure that anti-dumping duties are used productively.

Why Calculations of Anti-dumping Measures Have Proven Problematic

Whilst the process of imposing an anti-dumping measure is well regulated, the element of calculating the extent of dumping was highlighted as problematic in Burton’s article. As the EU explains in the Commission Implementing Regulation 2018/1570, following the rulings in Indonesia and Argentina (see para 8), the method of calculation has now been clarified in light of the ADA (for the original reports of the dispute settlement body, see Indonesia (DS480) and Argentina (DS473)).

The dispute between the EU on the one hand and Argentina and Indonesia on the other (see history here) follows a number of WTO challenges to anti-dumping measures (see discussion in Crowley and Hillman, ‘Slamming the Door on Trade Policy Discretion? The WTO Appellate Body’s Ruling on Market Distortions and Production Costs in EU-Biodiesel (Argentina) (2018) 17 World Trade Review 195-213) where the underlying issue was how authorities adjusted the prices of exporting producers. For example, when constructing a home market price for Argentine biodiesel, that is the price of which biodiesel was sold in Argentina, the European Commission chose to alter the price of soybeans to compensate for the distortion in soybean prices, caused by an export tax imposed by the Argentine government (see Crowley and Hillman, at 2).  The price was adjusted based on the fact that soybeans, the primary input of biodiesel, were considerably below the international price and the Commission reasoned the adjustment was what ‘would have been the price paid… in the absence of the export tax system’.

The dispute with Indonesia was similar in the sense that it also involved a problem with  calculations: the EU had replaced the actual price of crude palm oil that was within the producers’ records with an international reference price. The price of the palm oil was lower than international prices, which meant the EU imposed higher duties on Indonesia in response to what they calculated the extent of dumping to be. When deciding on the trade disputes in the cases of Indonesia and Argentina, the Dispute Settlement Body for the WTO found the EU had indeed acted inconsistently with both GATT 1994 and ADA.

Therefore, whilst there has been a period of uncertainty in calculating the extent of dumping, this imperfection has now been clarified by the WTO. The clear guidance now states that countries are not legally permitted to take government manipulated price control into account.

Since the WTO cannot regulate the act of dumping, the ability for a state to impose ‘remedial and not punitive’ measures in response to dumping are essential to nullify unfair trade practice. The measures imposed by the EU on biofuels have been used to counteract the great harm that dumping poses to the economic and social stability of the EU.

Biofuels being dumped into the commerce of the EU not only disrupts the trading of the fuels but also distorts the standard value of the commodity. EU producers are faced with unfair competition and in considering the vast difference in Indonesia’s access to the raw materials used for biofuels (i.e. palm oil) in comparison to the EU’s access,  the EU could not physically be expected to meet the competitors’ low price without a substantial economic loss. The subsequent effect on the domestic economy could see a closure in business and vast unemployment, which the EU is able to avoid with anti-dumping measures.

In summary, anti-dumping measures by the EU have been imposed to minimise the economic disruption caused by the dumping of biofuels. Whilst the EU was found to have miscalculated the extent of dumping, this was recognised and rectified by the WTO dispute settlement mechanism which in turn acknowledged the lawfulness of anti-dumping measures as such. Overall, these measures have been used productively to counteract unfair competition.