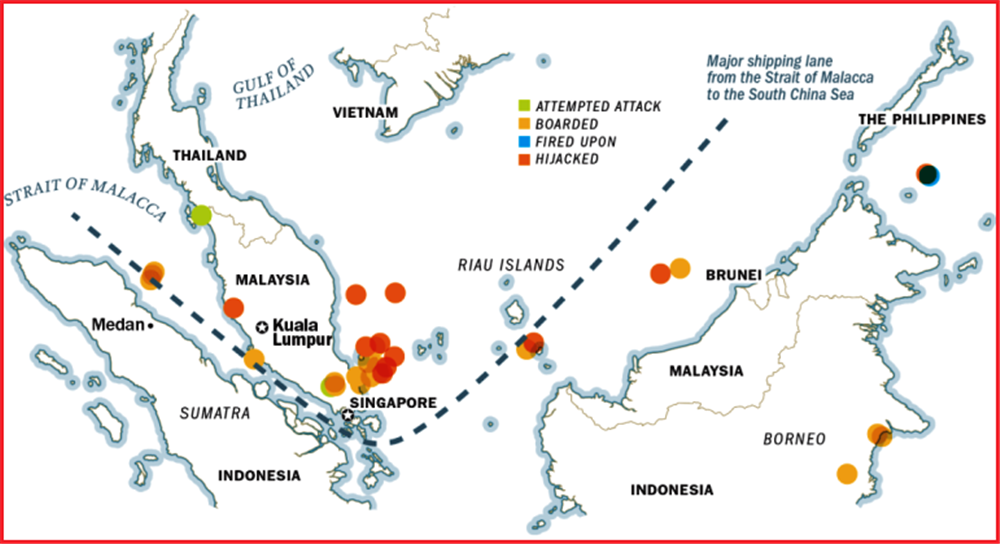 This post (edited for publication) is contributed to our blog as part of a series of work produced by students for assessment within the module ‘Public International Law’. We offer this module in the second year of Bristol Law School’s LLB programme. It is led by Associate Professor Dr Noelle Quenivet. Learning and teaching on the module includes the use of online portfolios within a partly student led curriculum. The posts in this series show the outstanding research and analytical abilities of students on our programmes. Views expressed in this blog post are those of the author only who consents to the publication.

As a trade route, the Strait of Malacca accounts for a quarter of the world’s traded goods, with over 94,000 vessels sailing through every year. The narrow stretch of water, located between Peninsular Malaysia, Singapore and Sumatra, Indonesia, has historically been particularly susceptible to pirate attacks. This is due to a combination of elements, ranging from its importance as a trade route to the geography of the waterway, compounded by the historical influence of piracy in the area. This blog aims to investigate, using the Strait of Malacca as an example, the effectiveness of legal regimes in combating maritime piracy.

One common misconception regarding maritime piracy is the belief that piracy is most prevalent in the waters surrounding Somalia and Guinea. However, between 1995 and 2013, the Strait of Malacca and the surrounding seas accounted for over 41% of the world’s pirate attacks – dwarfing that of the 28% staged in the Indian Ocean. This 18 year period also resulted in the reported loss of life for 136 seafarers – surpassing that of both the Indian Ocean and West African Coast combined.

Under Article 101 of UNCLOS, piracy is defined as ‘any illegal act… …containing violence… …that takes place on the high seas’. This wording effectively renders the provision unenforceable in the area due to the definition of ‘high seas’ under Article 1 of Convention on the High Seas, as the Exclusive Economic Zones of the three littoral States, as per Article 55 of UNCLOS, encompass the entire waterway – meaning due to the partial assertion of State sovereignty, the Straits cannot be defined as such. The ineffectiveness of UNCLOS in this respect has led the littoral States to attempt to use other methods to combat the seemingly perpetual issue of piracy in the area.

The Regional Cooperation Agreement on Combating Piracy and Armed Robbery against ships in Asia (ReCAAP) offers us one example of State collaboration in the effort to prevent piracy in the Strait. There are 20 States party, including a host of Asian countries, such as Singapore and Vietnam, as well as those less proximate to the Strait itself, for example Norway. Malaysia and Indonesia, however, are notably absent. Since its entry into force in 2006, the ReCAAP Information Sharing Centre (ISC) was launched in Singapore, where it has since become recognised as an international organisation as of January 2007. Used mainly as a central platform for information exchange between signatories and their respective ReCAAP Focal Points – usually the partying State’s main outlet of combating piracy such as the Maritime Port Authority of Singapore – the ISC is also used to cooperate with other like-minded organisations, whilst simultaneously facilitating capacity building efforts in a bid to improve the capabilities of States party in fighting piracy.

Along with the introduction of ReCAAP, Indonesia, Malaysia and Singapore have all increased efforts to eradicate piracy in the area. However, problems have arisen as a result of this due to factors such as allegations that Indonesia views Malaysia and Singapore as direct economic competitors as opposed to strategic allies – arguably supported by Indonesia’s absence from ReCAAP. The economic divide between the three aforementioned States also conceivably exacerbates the problem, as despite Indonesia’s relatively strong GDP, the difference in population results in Indonesia’s GDP per capita of $3,636 – with Malaysia and Singapore holding respective figures of $9,546 and $53,053. Naturally, those who have not reached a post-material existence may be more inclined to engage in criminal activity, for example, piracy – a simple solution considering Indonesia’s archipelagic coastline stretches for over 54,716km – with (Anderson, ‘It’s a Pirate’s Life for Some: The Development of an Illegal Industry in Response to an Unjust Global Power Dynamic’ (2010) 17 Indiana Journal of Global Legal Studies 319) using Somalian piracy to illustrate the phenomenon.

However, despite initial resistance from Indonesia to cooperate with other States, the Malacca Straits Coordinated Patrol (MALSINDO) was launched by Singapore, Malaysia and Indonesia in 2004 – although this has been hindered by the patrols inability to travel into territorial waters in effort to preserve State sovereignty. This reluctance can also be shown to have waned further, through cooperation between States reasonably proximate to the area, exampled through the Indian participation in the patrols following 2006 and Indonesia’s crucial involvement in China’s Maritime Silk Road initiative, which will naturally strengthen the patrolling forces.

Although piracy is still an issue in South-East Asia, the regional and international efforts to combat piracy in the Straits can be shown to have had at least some effect, as illustrated by the above graph. Whilst the same graph exhibits an increase in incidents following 2011, it is clear that the scale of piracy in the area has been reduced – notably so following 2004; undoubtedly due to the introduction of MALSINDO on a regional level alongside the international efforts under ReCAAP. This therefore shows that, despite the shortcomings of the relevant UNCLOS provisions, the legal regimes governing piracy in the Strait of Malacca can be deemed efficient.