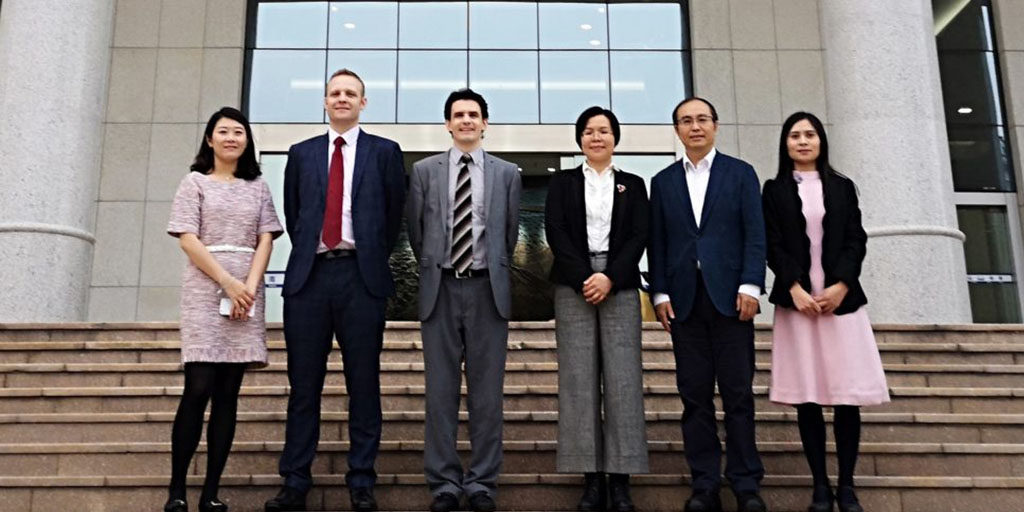 In February 2019, Dr Tom Smith spent a week working in China as an expert consultant for a research and training project, entitled ‘Reducing pre-trial detention through improved defence and non-custodial alternatives’. The project forms part of a broad reform programme aimed at improving pre-trial detention practice in the Chinese criminal justice system, by lower detention rates; improving defence rights for suspects; and widening the use of non-custodial alternatives (such as conditional bail). A significant part of the reform programme is the introduction of pre-trial detention hearings (known as ‘official arrest hearings’). These can be most closely compared to a defendant’s first appearance in a Magistrates’ Court in England and Wales (although with a number of distinct differences). At present, these hearings are being piloted in a number of cities across China, with the aim of increasing the participatory nature of proceedings; improving the transparency of the process;  and enhancing scrutiny of detention decision-making. The project is being co-ordinated by the Great Britain China Centre (based in London), in partnership with academics from the Centre for Criminal Justice Reform at Renmin University of China (Beijing), and the Supreme People’s Procuratorate of the People’s Republic of China (the national agency responsible for regulating criminal prosecution and investigation).

Tom’s primary role in this phase of the project was the design and delivery of training sessions for a variety of Chinese criminal justice professionals, including procurators (whose role is comparable to both a Magistrate and a prosecutor); defence lawyers; and police officers. The purpose of the training was to improve the professionalism of the procurators, lawyers and officers in two pilot cities (Shenzhen, in Guangdong province; and Hefei, in Anhui province). In addition, the training aimed to influence their approach to considering the protection of human rights in criminal justice proceedings by introducing perspectives on best practice in England and Wales, whilst providing a critical insight into our pre-trial detention system. The training sought to equip defence lawyers with knowledge and skills applicable to their role in pre-trial detention hearings, which is essentially an adversarial one. Tom was accompanied by criminal defence lawyer Luke Meyer, a Partner at Tuckers Solicitors in Kent. Together, they co-designed the structure of and materials for the training sessions (lasting a day in each pilot city), combining both academic and practical perspectives. The training covered topics such as the current structure of English and Welsh law on remand (i.e. court bail and pre-trial detention of defendants); insight into day-to-day practice in police stations and courts; a review of existing research on pre-trial detention in England and Wales (largely based on Tom and Professor Ed Cape’s report, ‘The Practice of Pre-trial Detention in England and Wales’); and a series of thematic sessions examining criminal legal aid, the use of video-link technology, alternatives to detention in custody, and impact on vulnerable groups of defendants.

Tom and Luke delivered the first training day in Shenzhen on February 22nd and 23rd, alongside sessions by leading Chinese academics and senior figures from the Supreme People’s Procuratorate. On February 25th, they observed an official arrest hearing in Hefei, via video link technology. This offered first-hand experience of the practical implementation of the reform programme, involving a real-life criminal case. The figures involved included two procurators (acting in a similar capacity to Magistrates); a defence lawyer; two police officers (acting in a similar manner to prosecutors in England and Wales); and the defendant (who appeared via video-link). After the hearing concluded, Tom and Luke were invited to ask questions of the deciding procurators in the case as well as the participating police officers. This was a rare privilege: this might be equated to the opportunity to question a bench of Magistrates and a prosecutor about their handling of a remand decision, directly after completing it – something that simply would not happen in England and Wales. This underlines how unusual and important this opportunity was, and provided a significant and unique insight into the progress of the reform programme on the ground. The second day of training was then delivered in Hefei. During both training days, and during associated networking events, Tom and Luke met with procurators, lawyers, academics, and senior local and governmental officials, and answered a variety of questions about English and Welsh law and practice. They were also invited to offer recommendations for continuing the progress of the project.

The opportunity to be involved in this highly significant reform programme was an undoubted privilege. The processes being introduced in China are novel to its criminal justice system, which does not have the same legal traditions and adversarial roots as English and Welsh criminal procedure. The energy and effort that is being directed towards the programme by the various parties involved was impressive and engaging. It is worth remembering that these were two of several pilot cities across the country, involving and effecting thousands of people. Above all, the programme has clear potential for positive impact on the lives of criminal defendants in China, emphasising the protection of human rights, increasing the scrutiny of decision-making, and working towards reduced use of detention before trial. Such goals are shared by many jurisdictions, particularly in light of the United Nations’ Sustainable Development Goals (SDGs), one of which (SDG 16) includes reduction of unnecessary pre-trial detention. This is therefore likely to be part of the long-term agenda for reform in China and beyond. The chance to contribute to this project, by sharing knowledge and understanding of pre-trial detention practice in England and Wales, was a very positive experience. It is hoped that there will be further involvement in this project, as well as a wider strengthening of ties between UWE and China.

Thomas is an in Law and member of the Centre for Applied Legal Research. His research areas include pre-trial detention and bail; disclosure of evidence in criminal proceedings; criminal defence lawyers; access to justice and criminal legal aid.