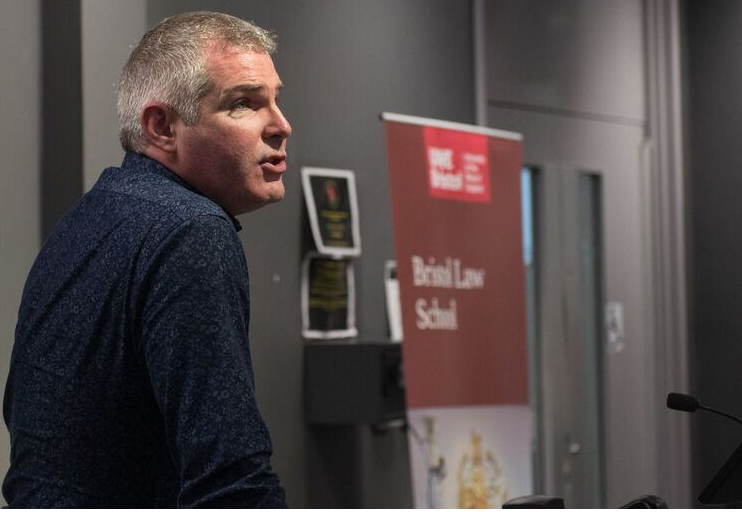 It was with great pleasure that we welcomed Professor Michael Dougan at UWE. He shared his views on the consequences of Brexit on the UK and the EU.

The title of his Address was ‘The UK outwith the EU and the EU without the UK’.

His address could not have come at a better time on the day Prime Minister Theresa May sent the letter of notification to Donald Tusk, the President of the European Council, to trigger the application of Article 50 TEU. We had some inkling that the triggering of Article 50 might coincide with the 60th anniversary of the European Union!

Professor Dougan was formally introduced by Dr Noëlle Quénivet, Associate Professor of International Law. Yet, Professor Dougan needs no introduction to those who have studied or are familiar with EU law. Many of our undergraduate and postgraduate students should know him from the EU workshops reading lists which include his writings, notably his comprehensive commentary of the Lisbon Treaty and his insightful article ‘When Worlds Collide’ that explores the relationship between the principles of supremacy and direct effect.

Those who are less familiar with Professor Dougan’s scholarly writings might have watched some of his video clips in which he clearly presents and discusses Brexit legal issues. The Liverpool Law School website uploaded his latest video clip on the impact of Brexit on Northern Ireland.

Professor Dougan is a well renowned legal scholar who holds a Jean-Monnet Chair at the University of Liverpool and is the Head of the Law School.

We are very thankful that he agreed to come to UWE to share his thoughts on Brexit despite a very busy schedule.

Professor Dougan first made five preliminary key commentaries showing the contradictions and shortcomings of the Government’s policy towards future relations with the EU as expressed in Theresa May’s Brexit speech and the Brexit White Paper of February 2017 and based on the two main tenets of the Leave campaign: hostility to EU immigration and hostility towards the European Court of Justice.

Then, Professor Dougan’s address focussed on two issues which, in his opinion, received relatively less attention in the public and political debate: how leaving the EU will impact upon the internal functioning of the UK legal system; and how the UK’s departure might affect the future evolution of the EU legal order itself. With regard to the first issue, after dissecting the UK Government’s basic strategy for addressing the twin challenges to achieve the aim of preserving legal continuity and legal certainty by retaining and incorporating existing EU rules into UK law at the point of withdrawal (through a so-called Great Repeal Bill, see Great Repeal Bill White Paper of March 2017) and to leave the task of making substantive decisions about which parts of EU law the UK will want to keep or amend or axe for future parliaments and governments after withdrawal, Professor Dougan’s expressed the overall view was that ‘UK withdrawal is not just about finding a new relationship with the EU.  It is also about opening our own legal and political systems to processes of far-reaching change.  Much of that change will inevitably be a matter of deep contestation and division among politicians / stakeholders / citizens.  But much of it will also be driven / constrained by our new place in the world and the new balances of power which emerge between the UK and our international partners.’

Before delving on the second issue, Professor Dougan first noted that outside Brexit, the Union is still facing a number of big challenges ranging from safeguarding the stability of the single currency and finding a stronger path towards economic growth; dealing with the migration crisis aggravated by difficult relations with Turkey; security issues exacerbated by notably Islamic terrorism; rising Russian belligerence in the East and increasing US instability in the West; to the worsening rule of law problems in Hungary and Poland. Independently of the EU response to the UK’s withdrawal, those crises are exerting pressure on the EU to adapt and reform itself.

Observing that ‘the UK referendum has given specific impetus to the desire for a coordinated reflection upon the EU’s future development and that soon after the UK referendum, the leaders of the EU27 decided to initiate their own reform agenda’ through their joint statement shortly after the UK referendum result, the Bratislava Declaration and Roadmap of the EU 27, the Commission White Paper on the Future of Europe and the European Council’s Rome Declaration, Professor Dougan proceeded with discussing a set of ‘important questions to which there are as yet no real answers’ such as: what issues might be on the agenda for the EU’s own reform process; and which legal instruments might the EU27 chose, in order to deliver the desired reforms?

He then focussed on the issue ‘which at least feels amenable to some degree of meaningful analysis and discussion’ ie the impact of UK withdrawal upon the Union’s institutions and policies.

In his concluding remarks, he reflected that ‘UK withdrawal provides a strong stimulus to EU reform, much of which was likely in any event.  But UK withdrawal will surely influence the nature and scope of those reforms: they may well end up being very different, from what they would have been if the UK had remained a member. Not least because UK withdrawal removes a major constituency of political influence and leadership; but also a major potential block in the decision-making system, particularly at the level of primary law reform.’

In his overall conclusion, Professor Dougan observed that while the ‘29th March 2017 may well be celebrated by the leading Leave campaigners and their zealous disciples as an historic victory, we should see it as the date when two important tasks become even more urgent than before: 1) to ensure that the Leave campaigners are held responsible for the consequences of their own choices and actions, judged against their own promises and denials; and 2) to fight for the values we want our country to respect and represent, against the very different and in many respects much darker vision advocated, in large part, by exactly those same Leave campaigners – now to be seen in their true and complete colours.’

The full text of the Address is available here: Michael Dougan Transcript

The Distinguished Professorial Address was closed by Raymond McDowell, Associate Dean of the Faculty of Business and Law.