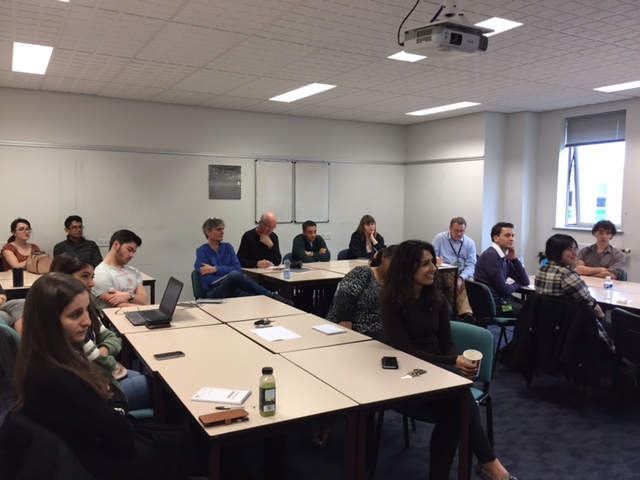 Dr van Engeland started by explaining that much of Islamic law was rooted in the past and it was imperative to understand this first. To illustrate this she took a well-chosen example for 8 March, ie women’s day. She pointed out that women in many Islamic States are not allowed to drive car and this stems from the prohibition for women to ride camels as this type of action would lead to women losing their dignity. Similarly, many of the deeds and speeches of ISIS are grounded in old Islamic law. For example, Islamic law provided for a framework on how to treat minorities and those who did not want to convert to Islam had to pay taxes.

Dr van Engeland explained that after 9/11 much attention was devoted to understanding Islamic law in relation to international law and more specifically human rights law. Such an interest however plummeted after ISIS spread across the Middle East. She lamented this fact, underlining that a conversation between Islamic law and human rights was essential. How can we reconcile the two? Why should we listen to these different voices?

As highlighted by Dr van Engeland, many theories on the relationship between Islamic law and human rights law have been formulated. It is possible to see this relationship in light of Huntington’s clash of civilisation. It is also possible to pinpoint that every right referred to in the Universal Declaration of Human Rights is also in the Koran. A third path that does not refer to the universalism or cultural relativism of human rights seeks to listen to alternative voices and to build a dialogue. Abdullahi An-Na’im is, as Dr van Engeland pinpointed, the first scholar who promoted such an approach, advocating for a change of Islamic law from within using the tools given in Islamic law to promote a new reading of the Koran that makes it more human rights-orientated. Dr van Engeland remarked that this trend of reforming Islamic law is not new however and has had some success. For example, the Iranian civil society managed to reform the law relating to the care of children in divorce proceedings. Under the law, a girl until the age was 7 stays with her mother and thereafter with her father. In the instant the mother started proceedings as she was concerned about the health and well-being of her daughter. The law was applied and the child died of ill-treatment. The law was then amended so that judges would be able to look at the best interest of the child, thereby integrating a human rights concept specific to children’s right. Dr van Engeland adduced a second example, that of Morocco whose Head of State reformed the law.

Nevertheless, this reformist approach is not without problems. First, not every verse can be reformed. For example the punishment of theft by amputation cannot be given any other reading. The same holds true of the issue of homosexuality which cannot be reconciled with Islamic law using the Islamic tools of interpretation. Despite this criticism, Dr van Engeland explained that some scholars such as Professor Mashood Baderin continue to work on this theory, inch by inch attempting to provide a human rights interpretation of Islamic law using Islamic theories and teachings. Prof Baderin also uses the concept of ‘public interest’ as a tool to this effect. So, Dr van Engeland explained, scholars such as Tariq Ramadan, advocate for a moratorium on amputation on the basis that it does not spread a good message around the world and that instances of history show that it was not used all the time.

Second, re-interpreting Islamic law can be done by anyone and lead to any interpretation. Indeed in Islam there is no one person who tells the truth which means that there is no one interpretation that is more correct. This lack of hierarchy can be problematic. Furthermore, Islamic law competes with cultural norms and local and regional customary law. For example, in Afghanistan a woman whose husband had gone fighting but did not return asked the elders for permission to remarry on the assumption that he was dead. They allowed for the marriage to proceed but when the first husband came back the elders punished the woman with zina, ie adultery.

More recent scholarly work on Islamic law and human rights law argues that Islamic law cannot work in a modern nation-State, namely because it was not meant to work in this context. Dr van Engeland disagrees with this proposition, pointing out that Sudan, Iran and Pakistan are examples of States where Islamic law is applied and works in the context of a State. Other scholarly works insist that Islamic law should be a private matter and that in the past secularism existed in Islamic times and places. Dr van Engeland however explained that Islamic law does not work well in such a context. Whilst she agreed that there were problems with human rights compliance Dr van Engeland stressed that it could not be generalised and one of the key problems was that Western legal theories were applied when in fact more original, creative thinking was needed.

So, Dr van Engeland suggests starting by looking at the facts and one that is of considerable importance is that Islamic law was meant to stay and withstand the time. Thus, arguing that it cannot adapt is fundamentally misleading. In fact there are areas of law where Islamic law has shown great flexibility such as Islamic banking law. Other examples adduced by Dr van Engeland were that in light of climate change eating crickets was allowed. Also, to protect the population from diseases certain types of vaccinations were permitted in Malaysia. All this illustrate the reaction and flexibility of Islamic law. That being said, she underlined that there are unfortunately areas that are difficult to adapt to modern times.

All this must be analysed in a wider conceptual framework. First, the idea that human rights are widely accepted needs to be challenged. In fact it appears that human rights are cracking everywhere. Also, the argument that liberalism and democracy go hand in hand with human rights is rebuttable. Second, a framework of thinking based on the dichotomy between universalism and cultural relativism needs to be dismissed as lacking usefulness. Third, often a post-colonial framework is used to understand Islamic law and, as a result, this narrows down the tools that can be used to interpret and understand Islamic law.

Dr van Engeland concluded that the current paradigms are ill-suited to tackle the issue well and creative, innovative and flexible thinking was required to enter into a dialogue between Islamic law and human rights. She argued that confronting Islamic law from a holistic viewpoint is unlikely to work. It was necessary to work issue by issue, point by point.