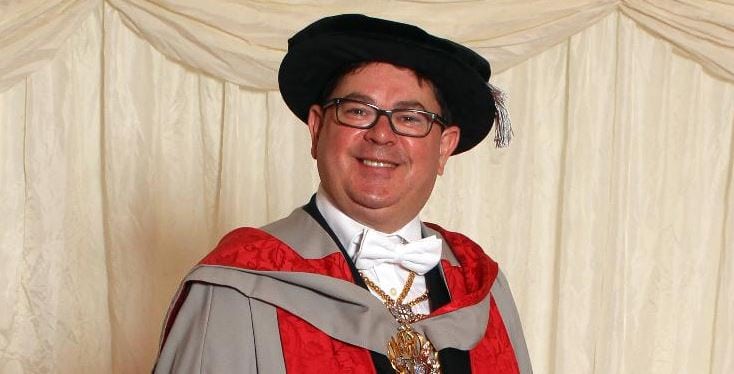 UWE Bristol awarded the Honorary Degree of Doctor of Laws to Alderman and Sheriff of the City of London, Timothy Hailes, JP, in recognition of his contribution to the legal profession and to public service.

The honorary degree was conferred at the Awards Ceremony of the Faculty of Business and Law at Bristol Cathedral on Monday 16 July at 10.30.

Tim is the current Aldermanic Sheriff of The City of London – holding an office that dates back to Anglo Saxon times and a pre-requisite to becoming Lord Mayor of the City of London; being established around 700AD. He became Sheriff at the age of 49. He is also a Managing Director and Associate General Counsel in the Legal Department of JPMorgan Chase & Co, which he joined as an Associate in 1999. Prior to joining JPMorgan he trained and qualified as a Solicitor, practising in law firms from 1993-1999 with a particular specialism in derivatives, securities and international capital markets.

Tim was educated at Bristol Grammar School, read a BA (Hons) degree in Medieval and Early Modern History at Kings College London where he was also President of the Students Union (1988-89), and then returned to Bristol to undertake his professional qualifications in law at UWE from 1991-93. He still considers himself a proud Bristol boy!

He was elected Alderman for the Ward of Bassishaw in the City of London in May 2013 having been appointed and sworn to the magistracy in the prior January. In 2017 he was appointed a Member of the Order of St John by HM The Queen.

In May 2014 he was named In House UK Finance Lawyer of the Year, was recognised as European Financial Services Regulatory Lawyer of the Year in May 2017 and was given a Lifetime Achievement Award for Services to the UK In House Legal Profession in December 2017. He is widely acknowledged as one of the leading banking, financial services and regulatory lawyers in the country and has represented the industry to governments, regulators and supranational organisations all over the world.