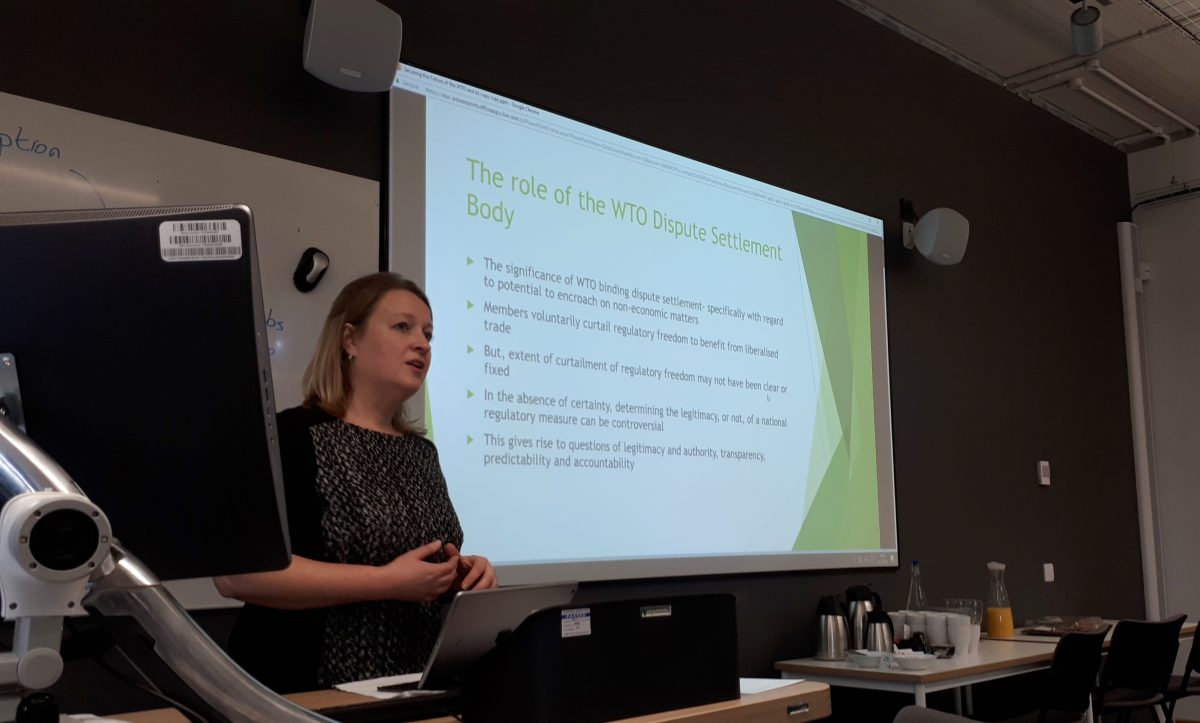 In November, Professor Emily Reid from Southampton Law School gave a guest talk entitled “Securing the Future of the World Trade Organisation“. Read the recap of the talk below:

For more than the last decade the WTO and ‘globalisation’ has been the subject of sporadic public protest, exemplified by events in Seattle in 1999. More recently, the last decade has seen in Europe a growing number of popular demonstrations against a range of trade and investment treaties such as the Comprehensive Economic and Trade Agreement (CETA) between Canada and the EU and the Transatlantic Trade and Investment Partnership (TTIP) between the US and the EU. Frequently disquiet has focussed upon a perceived conflict between economic liberalisation or indeed globalisation itself and social or environmental values. Reference to these protests and public sentiment formed the backdrop to Professor Emily Reid’s guest talk at UWE on 1 November 2017. Prof Reid, an expert in international economic law and sustainable development, examined how the World Trade Organisation is defending and can defend such non-economic interests whilst still holding a liberal view of trade relations. Her passion for the subject is drawn from her previous work on how the European Union has managed to accommodate the protection of human rights and environment with economic liberalisation, and extrapolating from this the lessons which the global community might learn from that. (see E Reid, Balancing Human Rights, Environmental Protection and International Trade: Lessons from the EU Experience (Hart 2015))

Prof Reid began by noting the growing diversity of legal orders, pursuing a range of objectives, both economic and non-economic, highlighting that the interrelationship between social, environmental and trade elements is complex and evolving. Whilst these three elements can clash in particular instances, they are not inherently in conflict and in the longer term they are, indeed, mutually dependent, as is evident in the concept of sustainable development.

The broader question relates to the legitimacy of this economic organisation inasmuch as its policies and decisions have been the subject of criticism by some for failing to take sufficient account of human rights and environmental concerns. The fragmentation of international law with its variety of actors and self-contained regimes further complicates the task: who are the regulatory decision-makers? Wherefrom does their legitimacy stem? How are they accountable and to whom? These pressing concerns are no doubt difficult challenges for States operating in a new legal order, in which the role of the state is radically different to that under the ‘Westphalian’ order in which the WTO was created. How can the State in a Westphalian sense of the term deal with this multiplicity of actors? How can (local) democratic accountability be secured?

In addition, the international legal context has considerably evolved in the past decades as the WTO has had to engage with the emergence of new popular concerns, such as environmental protection, and their associated legal regimes. Indeed when the General Agreement on Tariffs and Trade (GATT) was negotiated, the definition of ‘conservation of natural resources’ as an exception to the trade rules was understood in terms of mineral resources. The WTO has since, however, acknowledged that a modern understanding of the term was needed. Such recognition is crucial to the ongoing relevance and legitimacy of WTO law.

As global regulation is evolving and increasing, political and democratic demands are growing too. Contemporary political events (eg the vote for withdrawal of the UK from the European Union, the election of President Trump, the support for Le Pen in the French presidential elections) reflect a growing popular nationalism, and rejection of elements of globalisation: does this mark a transformative shift?

Prof Reid pointed out that the legal order that regulates economic relations is not only legally binding but also highly sophisticated in that it provides for binding dispute resolution. The pursuit of trade liberalisation requires a reduction of barriers to trade, yet national environmental regulation has the capacity to impede the application of WTO law, constituting as it can, a barrier to trade.

Thus Professor Reid identified the challenge for the WTO as being two fold – first, there is a challenge of legitimacy, and second, there is a need to re-establish and strengthen the balance between global economic integration and domestic regulatory autonomy. These carry implications for both the fact that the WTO addresses the balance between economic and non-economic interests and the manner in which it does so.

On the first, Prof Reid notes that it is significant that it is the WTO which is, by virtue of its dispute settlement mechanism, the sole adjudicator of the balance to be drawn between application of the WTO rules, and their relationship with national regulation. That the WTO, an economic organisation, is the organisation which determines the balance between trade liberalisation and national environmental regulation raises a number of legitimacy, and of accountability related questions. Prof Reid noted that there has been significant criticism regarding decisions made by economic bodies generally and the WTO more specifically, however she went on to note that on further investigation, some of this criticism is unfounded. The WTO Dispute Settlement Body has an obligation to apply the WTO rules, it has no jurisdiction to go beyond this, and would face questions of legitimacy were it to do so.

Prof Reid then turned her attention to examining how the WTO solves this conflict between on the one hand the rules of the WTO and its covered agreements, and on the other hand national environmental regulation. Has the WTO the competence to do so? If so, how has it taken on the challenge? After all, it is important that the WTO approaches the subject in such a manner that it meets the test of legitimacy as it otherwise opens itself up to further challenges.

In this light, Prof Reid argued that the WTO can indeed meet the challenge of legitimacy provided it (1) reinforces the non-discrimination paradigm (ie national treatment principle and most-favoured nation clause) and (2) re-examines the way in which it addresses the balance between economic and non-economic interests.

Prof Reid explained that initially the underlying objective of the WTO was to secure welfare gain for everyone. Later, imbued by a neo-liberal account, free trade became a goal in itself rather than a tool to reach other objectives. Illustrative of this development is Article 2.2 of the TBT agreement that provides that national regulatory measures must not only be non-discriminatory but also necessary. This is no doubt a manifestation of the neo-liberal thinking as both discriminatory and non-discriminatory regulatory measures must be justified. As a result the State is less free because it must prove that the measures (eg emission standards) are necessary as part of the test and this, of course, opens the door to greater and more in-depth reviews of national measures. Prof Reid thus argued that the non-discrimination paradigm must be reinforced.

Prof Reid then scrutinised the way the WTO dispute settlement mechanism can potentially encroach on how non-economic issues are viewed and addressed in international economic law. Whilst it might be contended that States had agreed to such legally binding mechanism on a voluntary basis they nonetheless did not expect such a curtailment of their freedom to act. This no doubt affects the legitimacy of the mechanism all the more as an increasing number of individuals deem the protection of the environment to be of utmost importance and feel that the WTO is impinging on such an important matter. That being said, Prof Reid stressed that the WTO dispute settlement mechanism has so far, notably due to its restricted mandate, adopted a conciliatory approach. The mechanism, when examining general exceptions to the non-discrimination principle, has adopted a broad interpretation of the terms so as to facilitate the use of these clauses to cover environmental issues. After carefully examining the test enshrined in Article XX GATT that relates to general exceptions, Prof Reid concluded that the mechanism does not question the level of protection offered by such measures, but whether the measure is the least restrictive in terms of trade. This enables the mechanism to keep an objective evaluation of the measure even though it does claim that it is engaging in a ‘weighing and balancing’ exercise. As a result of the mechanism refusing to examine the state’s level of protection (which is in fact consistent with the trade liberalisation paradigm) it avoids the legitimacy question.

In conclusion Prof Reid reiterated that the evolution of the international legal order poses a significant challenge to the WTO. She however maintained that the WTO has the capacity to address such challenges: it must reinforce the non-discrimination paradigm and continue to resist the movement towards a subjective evaluation of State measures

In the discussion that followed, participants asked questions about eg the consistency of the case-law of the dispute settlement mechanism, the interrelationship between WTO rules and regional agreements, how non-government organisations can influence WTO decisions, and the definition and application of the concept of ‘human health’ as found in Article XX GATT.