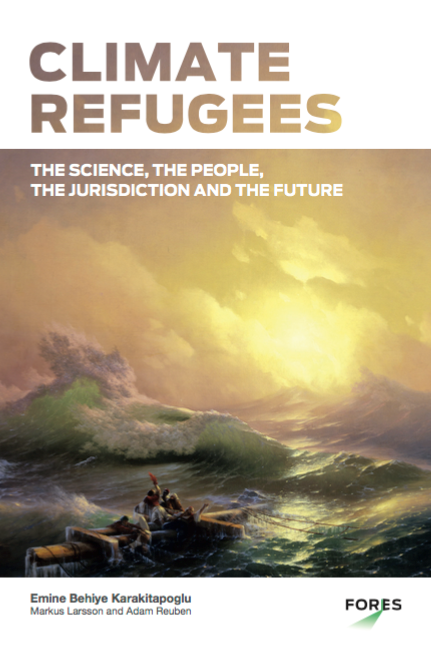 In October 2017 Fores, an independent think tank dedicated to furthering entrepreneurship and sustainable development through liberal solutions to meet the challenges and possibilities brought on by globalisation and global warming, published a report entitled ‘Climate Refugees: The Science, the People, the Jurisprudence and the Future’. On 18 October, one of the authors of the report, Adam Reuben, a former LLM in International law student, came to UWE to present the key findings of the report as well as his latest research on the topic of climate refugees in the European context. The talk was organised by the International Law and Human Rights Unit of the Centre for Applied Legal Research.

Rapid-onset climate events include for example floods, hurricanes and earthquakes and lead to mostly temporary displacement of the population. Such events have a push and pull factor in the sense that the population is not only pushed out of a place but also pulled inside the zone as in some instances such climate events have in the long-term created favourable conditions for eg agriculture, tourism.

Slow-onset climate events occur over time and include droughts, degradation, loss of biodiversity, and problems with access to food and water. Here, migration can be both temporary and permanent and a plethora of causes of migration can be identified. In this regard two issues need to be addressed: food security and water scarcity. Slow-onset climate events have created volatility in the market and disruption of food systems; yet, the effects on agriculture affects different regions and different types of cultures in varied manner. As Adam pointed out even if the Paris Agreement is complied with the sub-Saharan area will see a loss of 40% in maze crops. With regard to water-related issues, Adam explained that 40% of the world population experiences water shortage for at least a month a year and that 25% of the population lives in countries affected by chronic or recurring shortage of fresh water. Although the right to water has been recognised as a human right and is included in the sustainable development goals as well as in some national constitutions, little progress has been made. Adam stressed that water is not only used for human needs but is also an asset as such.

Global sea-level rise is a further trigger for climate migration. It is estimated that during the 20th century the sea level has risen by 6 cm owing to climate change. Low-lying coastal zones that include 600 million people are the most vulnerable to this phenomenon. Such rise not only affects the life and livelihoods of individuals but also challenges maritime borders, thus creating potential territorial conflicts.

This led him to discuss competition and conflict over natural resources as another trigger for climate migration. For example, water scarcity increases national instability and food scarcity may cause conflicts over land. It is often argued that the conflicts in Darfur and in Syria are examples of climate conflicts but there is no agreed consensus in the literature as to whether climate change can be isolated as the sole cause of conflict. In other words climate change contributes to conflicts and to migration but it is problematic to identify it as the cause.

It is difficult to estimate the number of climate refugees. Estimations range from 150 million to 1 billion though it seems that a consensus has emerged that by 2050 there will be over 200 million climate refugees. Adam highlighted the fact that there are marked regional differences of disaster displacement and this is partially due to the fact that there are rapid- and slow-onset climate events. At this stage Adam emphasised the fact that there is some wrangling about legal terminology here, notably the distinction between environmental and climate change refugees. This is compounded by the fact that reference is made to climate change, natural disaster and man-made disaster. Further, whilst some individuals cross the borders and are thus refugees in the sense of the 1951 Geneva Convention others do not and are thus considered as internally displaced persons. Adam stressed that international law does not recognise the concept of climate refugees which are usually defined as

‘… those people who have been forced to leave their traditional habitat, temporarily or permanently, because of marked environmental disruption (natural and/or triggered by people) that jeopardised their existence and/or seriously affect the quality of their life.’ Adam then sought to examine the relevant legal regimes, i.e. international environmental law, refugee law, migration law and human rights law. The UN Framework Convention on Climate Change Agreements rarely refer to climate migration (see e.g. COP 16, 18 and 21) and the Paris Agreement makes a vague reference to such migration. But is the UNFCCC the relevant forum to address the issue of climate migration? The UN High Commissioner for Refugees rejects the expansion of its mandate to consider climate migration. That being said it operates on the basis of ‘climate change hotspots’ to somehow fill the gap. So, by not isolating climate change as the sole cause of displacement, UNHCR is able to protect such individuals. Interestingly, Adam pointed out that the International Migration Office was at the forefront of the work on the protection of climate refugees having produced excellent studies on the subject-matter. Also the Nansen Initiative produced in 2015 an Agenda for the Protection of Cross-Border Displaced Persons in the Context of Disasters and Climate Change. From a human rights perspective there appears to be some form of protection offered to climate refugees but mainly only because they fall within other categories such as refugees and displaced persons. Most importantly the principle of non-refoulement, the cornerstone of the 1951 Geneva Convention, has been read into human rights instruments via the prohibition of torture and inhuman treatment. At this juncture Adam explained how the jurisprudence of the European Court of Human Rights could be used to protect climate refugees, arguing that as the Convention is a ‘living instrument which […] must be interpreted in light of present day-conditions’ it could potentially provide an adequate legal framework for protection.

Last but not least Adam considered the issue of climate refugees in the European Union. He contended that climate refugees are not legally recognised by the EU and that it is not possible to interpret existing legislation so that it incorporates climate refugees. Various studies and papers refer to climate refugees but no clear strategy can be discerned as of now. Rather, an incoherent and piecemeal approach seems to be the preferred approach of the EU.

The discussion that ensued covered a wide range of themes. First, the issue of terminology was raised and especially why and whether terminology was of such importance. The concept of forced environmental migrant seemed to be accepted by the audience as probably most suitable to describe a variety of persons affected by climate change events. Second, the interaction of the various legal regimes and where the protection of climate refugees would sit best was discussed at length, especially in light of the doctrine of State responsibility that requires harm to be linked to a State or a State actor. Third and last the discussion veered towards the European Union’s approach towards climate refugees. It was notably pointed out that given that Member States had territories overseas that were liable to climate events the topic of climate refugees could become quickly an issue of concern for the EU.