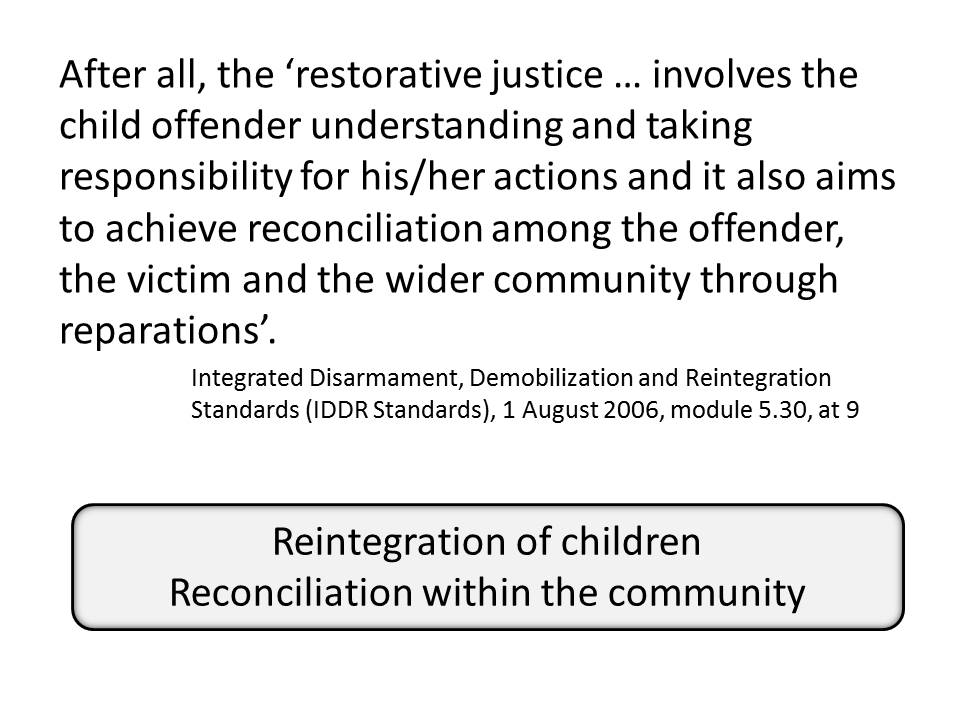 The picture of a young African boy holding a Kalashnikov in his hands has come to represent the archetypal child soldier drawn into a conflict he does not understand. It is thus claimed that children are not culpable for crimes they might commit during the conflict and, consequently, should not be prosecuted. On 1 March 2017 Noëlle Quénivet, Associate Professor in International Law at UWE, Bristol, challenged this view at a Centre for Applied Legal Research Forum. Alison Bisset, Associate Professor in Human Rights Law at the School of Law of University of Reading, responded to her paper. Noëlle Quénivet’s presentation, based on a paper that has been accepted for publication in the European Journal of International Law, argued that first, international law does not prohibit the prosecution of children for war crimes and second, in certain, narrow circumstances children having committed such crimes should be prosecuted.

The international community has for more than two decades pushed towards the prohibition of the prosecution of children for war crimes on the basis that children should be primarily viewed and treated as victims by virtue of their age and forced nature of their association with armed forces/groups. This lex desiderata created by the global civil society and UN agencies remains a wish, for the relevant lex lata, ie international humanitarian law and international human rights law allow States to prosecute children and even regulates such instances. States are encouraged to ‘[c]onsider excluding children under 18 from criminal responsibility for crimes committed when associated with armed forces or armed groups.’ (page 36) Has this permissive rule become a prohibitive rule? Or, phrased differently, have States made use of the permissive rule and thus prevented the creation of a customary norm prohibiting the prosecution of children for war crimes? After examining the practice and opinio juris relating to the prosecution at national level Noëlle Quénivet concluded that because post-conflict restorative mechanisms overshadow rehabilitative models of juvenile justice no clear answer can be given as to why States are not carrying out prosecutions. However, the fact that the US prosecuted (though not without controversy) children held in Guantanamo Bay for war crimes it was possible to draw the conclusion that States wished to keep permissive rule though in the very specific context of African post-conflict situations there seemed to be a trend towards the prohibition of prosecution. States practice at the international level is even less clear, for, while a few instances of state practice on the prohibition of the prosecution of children for war crimes can be discerned with regard to statutes of international tribunals and courts, the opinio juris seems lacking. States’ decision not to prosecute children is based on policy rather than law. In other words, States have kept the permissive rule alive.

The next question Noëlle Quénivet asked was whether the permissive rule should be retained. To answer such a difficult question she explained that the analysis of State practice and opinio juris reveal that the key element in States’ decision not to prosecute children for war crimes relates to the post-conflict context rather than to the age of the alleged offender. Put differently, the post-conflict restorative model of justice supersedes the rehabilitative model of juvenile justice. Rehabilitation of the child soldier happens within a wider restorative justice mechanism in which reconciliation among the offender, the victim and the wider community is essential. Yet, can reconciliation be achieved without justice or at least a sense of justice? Prosecution could be used as a tool to achieve this. Also, what happens to children caught in situations where there are or where is no need to create such reconciliation mechanisms and the veil of post-conflict restorative justice has been removed? This prompted Noëlle Quénivet to contend that the permissive rule should be retained but harmonised, ie applicable to a variety of situations, as well as limited in view of the fact that the prosecution of children for war crimes mainly rests on a deterrent approach towards punishment and the best interests of the child must stay the focus of any proposal. Noëlle Quénivet then proposed an elaborate system of triage and thresholds as she explained that any solution needed to work for the community by restoring a sense of justice as well as for the children in sending a message that the behaviour they have embraced is reprehensible. Further, she contended that the age of criminal responsibility should be set at 16.

Alison Bisset then shared her views on the subject. She pointed out that Noëlle Quénivet’s assessment of the international legal regimes and analysis of state practice demonstrated convincingly that in response to her first question – does international law prohibit prosecution? – the answer was no. The prosecution of child soldiers is neither prohibited by treaty, nor under customary international law. Yet, there is indeed a movement towards rehabilitation and reintegration as the favoured response and this movement finds some support in international law if child soldiers are viewed as being victims of exploitation and abuse. Treaties such as the UN Convention on the Rights of the Child as well as soft law instruments such as the Cape Town and Paris Principles view restoration and rehabilitation as in the best interests of children associated with armed groups and armed forces. Coupled with the fact that the ICC has jurisdiction over only those aged 18 and over at the time of the alleged offence and that children have not been prosecuted before international or internationalized courts, Alison Bisset argued that there is a belief at the international level that children should not be prosecuted for war crimes even if international law does not prohibit it.

Answering the second question – should international law prohibit the prosecution of children for war crimes? – was more difficult especially as recent studies point out that first, children are able to make fully reasoned choices on whether or not to join armed forces/groups and second, the affected society may seek the prosecution of lower level perpetrators such as children. Thus although Alison Bisset stated that there was no principled justification for why child soldiers should not be prosecuted, she maintained that if States were to stand the best chance of restoration and long-term peace and security, they must rehabilitate their children so that they can play a constructive role in building the future.

Alison Bisset then offered an insightful critique of Noëlle Quénivet’s restorative model of justice focused on rehabilitation and reintegration with prosecution acting as a last resort in a limited number of specific cases. First, she stressed that the creation and resourcing of programmes implementing Noëlle Quénivet’s proposal would pose a number of challenges. Necessary systems and safeguards would need to be put in place to protect children’s vulnerability and provide them with adequate support. Also where rehabilitation programmes become linked, even tentatively, to formal judicial proceedings a whole host of questions around procedural rights and protections also arise. The financial cost of these programmes cannot be overlooked. Sadly, Alison Bisset noted that even current initiatives, which are generally less complex than what was proposed, are not working well, thus questioning what chance there was of successfully introducing something even more complicated.

Alisson Bisset finished her response by sharing her views on wider issues. She, for example, noted that there was such a preoccupation with prosecution in the aftermath of mass atrocity that there was notable decline in the attention paid to and the quality of post-conflict transitional processes. This impacted on the effective rehabilitation and reintegration of child soldiers. Furthermore, the preoccupation with child soldiers deflected attention from other severe and far-reaching consequences of armed conflicts on all children.

The CALR Forum was attended by about 15 students and staff members from UWE. After Alisson Bisset’s response questions were taken from the floor. The audience was particularly interested in the nature of the charges brought against children (ie terrorism or war crimes), prosecutorial discretion in charging those fighting on the ‘good’ side, the definition of ‘voluntary recruitment’ and its application on the African continent, the effectiveness of the work of the United Nations Special Representative for Children and Armed Conflict, etc. The complexity of the issue of child soldiers and, more generally, children in armed conflict was no doubt stressed in this sober-minded exchange of views.