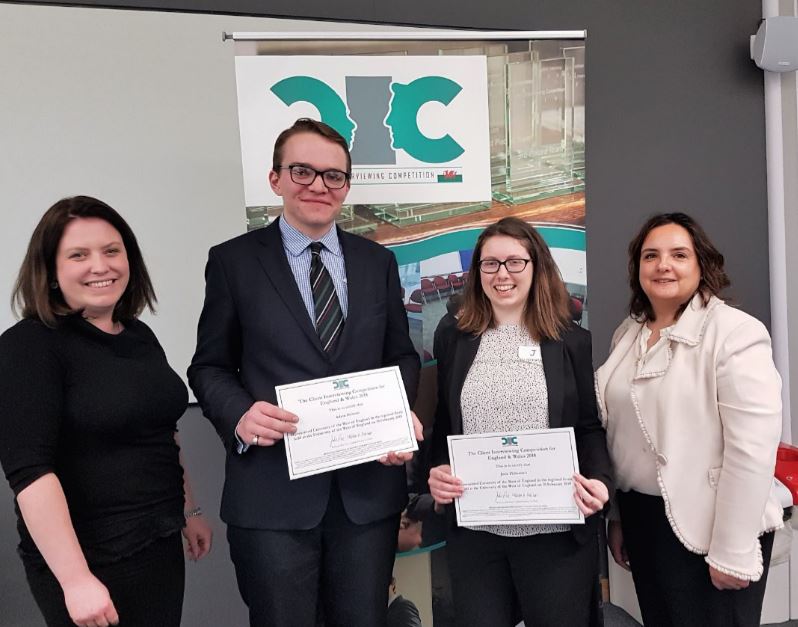 The Bristol Law School (BLS) team, consisting of Josie Hebestreit (LPC) and Adam Hobson (GDL) came 2nd in the competition. They will now take part in the National final which is being held in London in March. If the BLS team is successful at the nationals, they will go through to the international competition which is in Maastricht this year.

Senior Law Lecturers Suzaan Rowley and Victoria Latimer with the help of the UWE Law Society, offered training sessions to any BLS students who wanted to compete in the competition. Adam and Josie as UWE finalists went on to be coached by Suzaan and Victoria and were chosen to represent UWE at the regional competition. This was the first time UWE Bristol had entered a team into the competition.

Josie and Adam faced stiff competition from other universities including University of Bristol, University of Law and Cardiff University. The pair were placed 2nd after Oxford Brooks and will now join 9 other teams at the national competition.

“We are delighted Adam and Josie got through to the nationals as the competition was very tough! Client interviewing is a key legal skill that all lawyers need to perfect so this competition will help them develop their interview technique further.”

Congratulations to Adam and Josie!