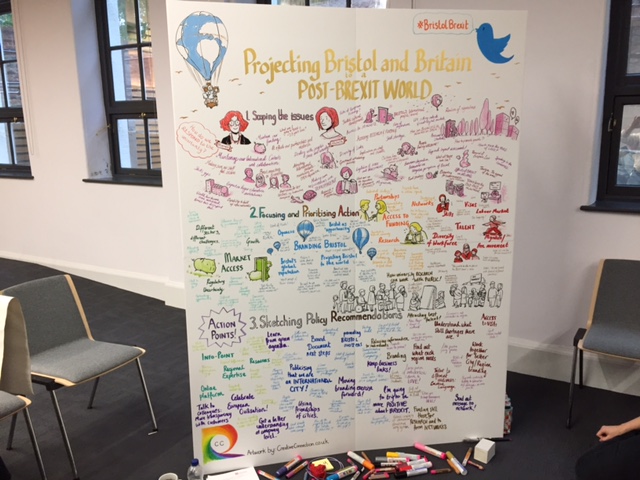 Amongst the key issues broached in this agenda-setting discussions were the need to keep Bristol an open and international city, the challenge of responding to the uncertainties created by Brexit and the related negotiations (eg the change of regulatory framework), the potential loss of funding for various industries (eg  universities) and activities (eg culture and arts), access to the European market for the finance sector, the importance of diversity amongst the workforce , the impact on tourism, etc. Members of the introductory joint session agreed that there were four overarching issues: (1) talent and skills that related to the labour market, migration and diversity of workforce; (2) access to funding and the future of networks and partnerships; (3) market access, growth and regulatory uncertainty; and (4) Branding Bristol as a city of global reputation and openness.

For the second session the discussion centred upon the main challenges, concerns and identified earlier. The purpose was to gain a deeper understanding of these issues and single out those that required priority attention. Christian Dadomo and Noëlle Quénivet participated in the group that examined the issue of ‘market access, growth and regulatory uncertainty’. To start with, the group wondered whether Bristol and the community of Bristol was able to influence decisions relating to market access and growth, ie whether it had the political power to do so. A long debate ensued, focusing on whether businesses should be involved in politics, whether they in fact can lobby and if yes, for what should they lobby. Different trading options were mentioned: access to the Single Market, a Customs Union, a tailored trade deal, trading under the rules of the World Trade Organisation (WTO).

Organising the ‘voice’ of businesses was even more difficult because various industries are currently taking a very pragmatic approach, gathering data, carrying out risk assessment analyses and examining potential post-Brexit scenarios. Each analysis required looking at future investment possibilities, tax, legal regulation on import and exports, etc. Each industry, each sector, each type of company was coming to the conclusion that a specific industry, sector, company-type (large/SME, international/domestic orientated) answer was warranted. In other words, it was not possible to talk about a single solution that could be used for lobby purposes. It was also pointed out that businesses are always looking for opportunities and some see Brexit as an opportunity to exploit.

So, what are the industries and sectors that are important to Bristol? What are the companies and sectors that are locally connected? It is in this context that the idea of ‘stickiness’ was mentioned. Undoubtedly, there is a pool of competencies located in Bristol that thrives on free movement of persons and attracts further talents to the city and the region more generally. The sectors that were mentioned in this context were the creative industry, the aerospace sector, etc. Whilst some of these can indeed relocate their activities to Europe or further afar (eg Airbus), others cannot. Indeed, research shows that the effect of Brexit is more significant and real on domestic businesses than on internationally facing businesses. The more localised industries are likely to take the hit. Indeed, in the services industry, unskilled migrants are key to Bristol, especially in the tourism sector. Also, the costs associated with the reintroduction of customs, administrative regulations, etc are likely to be onerous for businesses. It was further stressed that networks and embeddedness were important factors in determining how businesses would be affected. After all there was a ‘local cluster effect’. Pointedly, the re/delocalisation of large companies would have an impact on local businesses working them as well as a social impact on the local population as such. Next, the group delved into the difficult issue of how businesses in Bristol could be supported in the current economic and political climate. Again, the question of which industries and sectors warranted particular attention and support was examined. A note of caution was rung inasmuch as pinpointing which sector should be prioritised could lead to discrimination and indirectly to the potential loss of sectors that might at a particular moment in time not be viewed as that important and deserving such support.

In the third session, the group aimed at formulating policy recommendations and action points with a view to addressing the challenges and opportunities identified in the previous session. In the group on ‘market access, growth and regulatory uncertainty’ it was suggested that local businesses be trained in how changes might and will affect their everyday practice. It was also agreed that the lack of awareness and knowledge about key institutions such as the World Trade Organisation or key agreements (European Economic Area Agreement) and/or types of free trade agreements needed to be remedied so as to give local businesses a better chance to tackle the effects of Brexit.  Clearly, education could assist in risk mitigation.

Amongst the key recommendations was the creation of a regional forum/information point for industries, groups and individuals to make the uncertain more certain. This could act as a central point for a variety of stakeholders to gain a better understanding of certain issues, to accede expertise across academia and business sectors, etc. The group also discussed how information could be imparted: seminars, briefings, lectures, webinars, and combinations thereof were mentioned as possible vectors of information but it was underlined that the information needed to be presented in a way that businesses could understand. Further, it was noted that owing to the knowledge gap it was at this stage more important to fill in that gap and illustrate the problem than provide ready-made solutions. After all, businesses were likely to find their own, tailor-made, solutions in due course and seek assistance along the way. Providing them with quality expertise was thus essential.

On 23 May a public event ‘#BristolBrexit – A City Responds to Brexit’ will showcase the outcomes of this and other workshops held by the University of Bristol. It will include stalls, presentations, interactive networking opportunities and an art exhibition and the possibility of co-produced work and collaborative network.