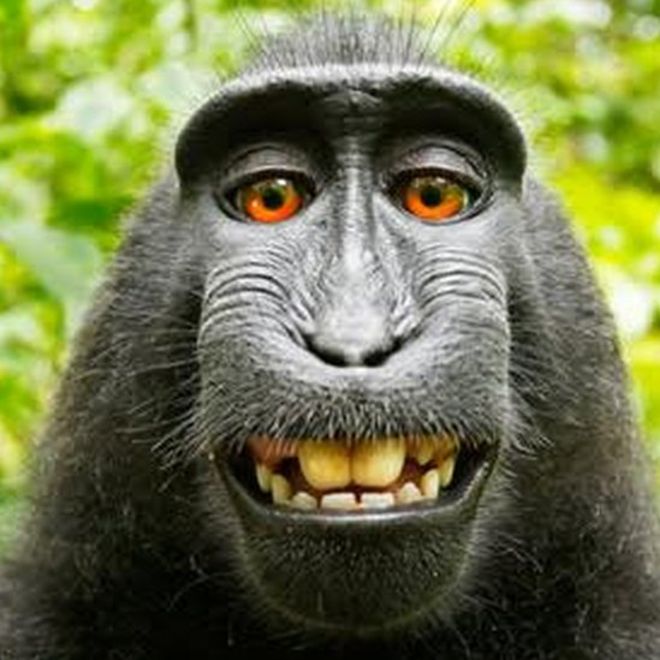 The “Monkey selfie” case took another turn this week with news that a settlement had been reached between local Forest of Dean photographer, David Slater, and the pressure group PETA, People For the Ethical Treatment of Animals. Marcus Keppel-Palmer, Law, who has commented on the case regularly in the media takes up the story.

The photographer travelled to Indonesia and spent considerable time, money and effort ensuring the endangered Macaque monkeys that he met there became comfortable with his presence and his camera equipment. Wildlife photographers need to be creative when arranging for the best shots, often needing to set up infrared light beams and similar to trigger photographs when animals break the beams. In this case, Slater set up a tripod and encouraged the monkeys to see their reflection in the camera. As part of this, he set up a shutter trigger which the monkeys learned to pull.

One photograph showed a grinning monkey, believed to be Naruto, and it was this photo which went viral, earning Slater money. At this point, Wikipedia started to permit the free circulation of the photograph and when Slater challenged this, Wikipedia sought a declaration that as the monkey pressed the shutter, Slater did not own copyright in the photo. On the back of this, PETA then sought a declaration that the monkey, Naruto, owned the copyright in the photograph. As these actions were brought in the California courts, Slater found himself financially at a disadvantage, and has settled giving 25% of his earnings to charities which protect the monkey’s habitat.

Whilst the facts, and the fact that the most recent court hearings coincided with the release of the most recent Planet of the Apes film, meant the story being seen as the “hohoho” story on the news, there are a number of significant issues raised by the case.

First, whilst there was a clear rejection by the California Court that a monkey can own copyright, this case can be seen as a further step towards the recognition that animals have protectable rights. Recently, a court in Argentina ruled that an orangutan which was in an enclosure by itself in a zoo was “illegally detained” and should have the basic right to socialise with others.

Second, the case has caused uncertainty in the wildlife photographer community (and Bristol is very much the centre of wildlife photography and filming), as it may constrain some of the methods used to get close up to animals in the wild. The continuing differences in the test of “originality” required for copyright to come into existence between the traditional “sweat of the brow” test in the UK and the more “creative originality” test in the USA, placed emphasis in the UK on the time, cost and skill put in by the photographer as opposed to the USA arguments that the monkey pressed the shutter and arranged itself in front of the lens.

Thirdly, this is a further example of “difficult” copyright decisions being made in the California courts on copyright. With the film and music industries being based in LA, as well as the big digital companies, cases which might have been heard elsewhere are now increasingly finding a jurisdiction in California. The Blurred Lines case sent a chill through the music community with the decision that a style of music is protectable, whilst the Jay Z / Timbaland case involving the sampling of “Khosara Khosara” worryingly saw the Court ignoring the provisions of international copyright treaties.

“The case took the photographer to fight his case in San Francisco, when he would have been better trying to move jurisdiction to England and Wales. Creatives must look at ensuring they have protected their Intellectual Property at the outset, as a challenge later on down the line can prove enormously expensive. “