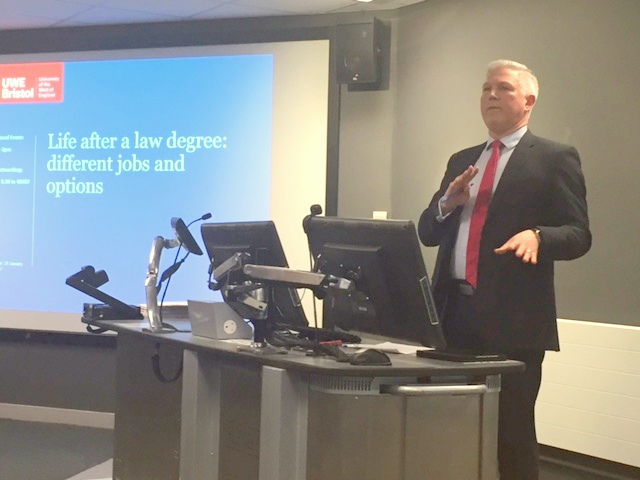 Jonathan and Steve both completed their degrees at UWE Bristol.

Each speaker explained what their current role entailed, giving detailed and engaging examples to illustrate the breadth of their responsibilities. They then explained their career path from completion of their degree to their current role and finished by giving advice and tips to current students about how to maximise their chances of pursuing an interesting and varied career after graduation.

During the questions put to the panel members at the end, the two UWE alumni were asked to explain what they felt they had gained from their time at UWE. Jonathan Grant praised the mooting that he had taken part in during his law degree and said that he still had one of the posters his team had prepared for a moot! He encouraged current students to get involved with any of the extra-curricular activities offered at UWE, such as mooting and pro bono work as these will all improve CVs and make students stand out from the crowd. Steve Rowan said that he had taken his law degree on a part-time basis, whilst working at the Intellectual Property Office and he praised the practice-orientated teaching he’d received at UWE and the wide range of modules on offer, including the IP module which he of course took.

Around 150  students attended, some of whom are on our FBL Foundation Year course, designed for students progressing to any degree within the Faculty of Business and Law. Also attending were students from years 1-3 of the undergraduate law courses and some post-graduate Graduate Diploma in Law and Legal Practice Course students.