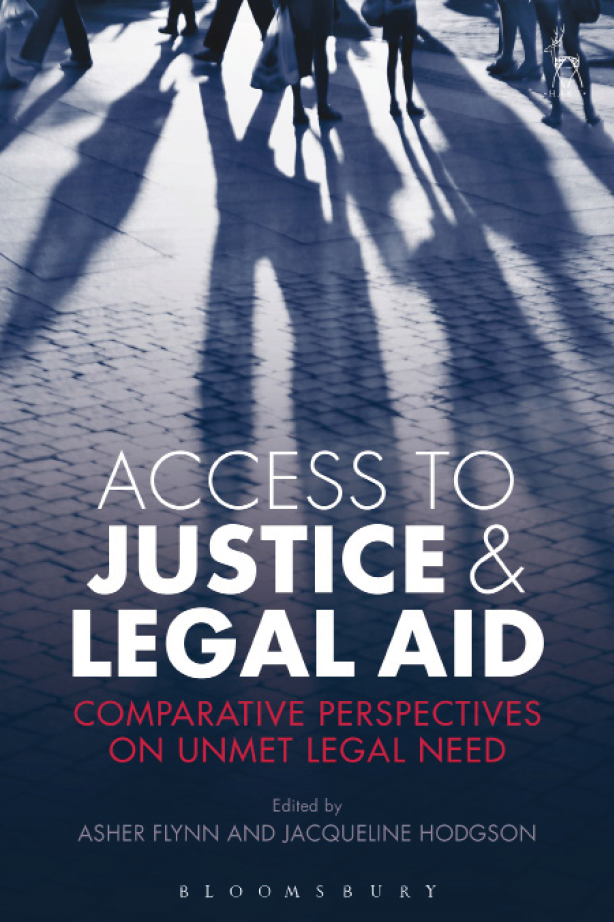 Professor Ed Cape and Dr Tom Smith have had a chapter published in the book: Flynn & Hodgson, ‘Access to Justice and Legal Aid: Comparative Perspectives on Unmet Need’ (Hart, 2017).

The book considers how access to justice is affected by restrictions to legal aid budgets and increasingly prescriptive service guidelines. As common law jurisdictions, England and Wales, and Australia, share similar ideals, policies and practices, but they differ in aspects of their legal and political culture, in the nature of the communities they serve and in their approaches to providing access to justice.

These jurisdictions thus provide us with different perspectives on what constitutes justice and how we might seek to overcome the burgeoning crisis in unmet legal need.

The book fills an important gap in existing scholarship as the first to bring together new empirical and theoretical knowledge examining different responses to legal aid crises both in the domestic and comparative contexts, across criminal, civil and family law.

A summary of the book chapter can be found below:

“In 2013, then Lord Chancellor Chris Grayling proposed major changes to the funding of criminal legal aid, including large cuts in fees and forced contraction of the market of legal aid service providers. Arguing these reforms would endanger the viability of the criminal legal aid system, the legal profession and others engaged in a very public two year battle to stop – or at least dilute – the reform programme. In the wake of strike action by lawyers in July 2015 and multiple legal challenges to the contracting process, new Lord Chancellor Michael Gove abandoned a good deal of the reform package.

Whilst this represented a particularly bitter dispute, conflict between the Government and the criminal legal aid profession is not new. For more than two decades, criminal legal aid has arguably been devalued by consistent attempts to reduce its financial burden on the state and consequently the scope of its provision.

In this chapter we argue, with regret, that the prospects for criminal legal aid in England and Wales are bleak. We begin by tracing the development of the modern system of criminal legal aid, from its inception as an essential element of the welfare state following the Second World War, to its peak in the 1990s. We then describe and analyse its decline, arguing that whilst the need for economy and efficiency, especially following the global financial crisis of 2007-08, has been used to rationalise government policy in the first decade and a half of the twenty-first century, the roots of that decline are deeper, and reflect an antipathy not only to state welfare provision but also to procedural justice and fair trial.

This is followed by an examination of the likely impact of both budget cuts and changes to the arrangements for managing and delivering criminal legal aid. Whilst there are grounds for optimism at the international level, with both the United Nations (UN) and the European Union (EU) recognising the fundamental importance of legal aid in underpinning justice and fair trial, successive British governments have lacked a commitment to developing and sustaining a high quality criminal legal aid system”

For more information on the book and to order a copy please see here.