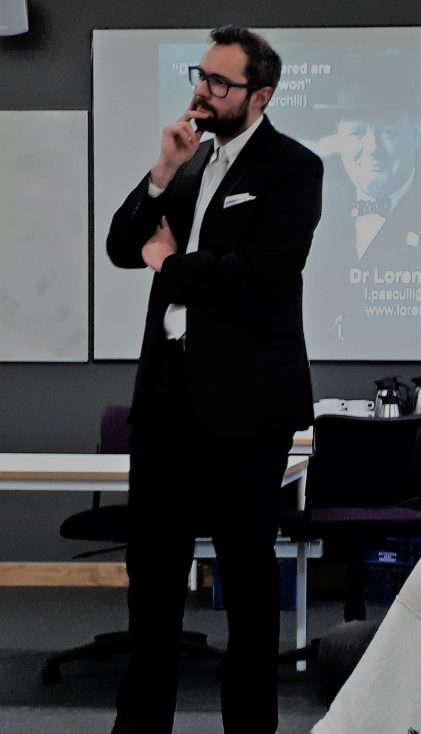 The talk was organised by the Commercial Law Unit and the International Law and Human Rights Unit on behalf of the Centre for Applied Legal Research.

On 14 February 2018 Dr Lorenzo Pasculli, Senior Lecturer in Law at Kingston University London challenged the audience to look at Brexit through the prism of corruption. No doubt this was an insightful and out of the ordinary guest talk for those who suffer from Brexit fatigue.

Dr Pasculli started by explaining that since Brexit or anything similar has never happened before it is difficult to find a theoretical framework to reveal what the consequences of Brexit will be on corruption. That being said, Dr Pasculli stressed that in his opinion Brexit has and will have an impact on integrity at a variety of levels as well as anti-corruption laws and policies.

In relation to integrity, the impact of Brexit can be felt in three areas: political, financial and commercial as well as systemic social. Dr Pasculli explained that the impact of Brexit on political integrity can be analysed at both macro- (ie public bodies, corporations and the media) and micro-level (ie individuals working in the public service) on the one hand and from an internal (ie British politics) and external (eg foreign affairs as well as other States) perspective. This risk factors relating to political integrity are chiefly due to the multiple and complex interests which create division as well as confusion and so mistrust that is amplified by what Dr Pasculli calls, ‘the wrong choice of decision-making device’ which was the referendum. At the internal micro-level there has always been a solid tradition of political integrity even when there were conflicts between personal views and the views of the party. The risk here is that if individuals externalise their dissent they might be reprimanded or marginalised for doing this (as it happened in some recent case). This might lead to the repression of pluralism and dissent. At the internal macro-level, the UK which is often viewed as the beacon of the rule of law is performing very poorly as politicians with undermined integrity did not explain the complexity of the issues and certain lobbying and media stained the Leave campaign of misinformation. Dr Pasculli pointed out that the lack of regulation of the British press exacerbated the influence of lobbies on certain press. The dearth of effective sanctions facilitates partisan press and political misinformation. Further the lack of mechanisms for politicians to step back, apologise for and correct the effect of misinformation on the general public (eg £350 million for the NHS campaign) undermines political integrity. Overall this atmosphere has led to (1) a phenomenon of deresponsabilisation; (2) reliance on emotions rather than reason and information when law and politics should be based on rationality, reasonableness and evidence; (3) general deterioration of political integrity and standing. The consequences of Brexit on external politics (outside the UK) should not be underestimated too. Discussions were had on possible emulations in the form of Grexit and Exitaly but they did not materialise. Most importantly Brexit has strengthened the global trends of populism and nationalism that clearly undermine political integrity as voters are given information that is not built and/or supported by evidence. Brexit, in other words, nurture the global trend of irrationality. After Dr Pasculli argued that this erosion of political integrity leads to ‘legalised forms of corruption’ (eg press being lobbied and lack of regulation of the press) he called for a widening of the definition of corruption in line with the anti-corruption convention. He highlighted the revolving door appointments as an example of lawful practice and stressed that research shows a disconnection between what people believe is unlawful and the actual regulation of particular activities. Dr Pasculli explained we should seize Brexit as an opportunity to raise awareness about these problems as well as ensure a better responsabilisation of certain politicians. Both internal and external pressure can be used to persuade the UK to adopt necessary regulatory measures.

Dr Pasculli then moved on to examine the impact of Brexit on financial and commercial corruption. Dr Pasculli started by explaining that the UK government has clearly explained that the UK will leave the single market even though the EU market is crucial. The conditions imposed by the European Union to the UK in relation to market access might be viewed by the general public as unreasonable and unfair. Such a perception could lead to a violation of legal rules, for there is a tendency to the rationalisation of corrupt practices when the law is seen as useless and/or unfair. This inevitably creates a subculture that encourages corruption more generally. Furthermore, Dr Pasculli observed that as the UK is looking to negotiate trade agreements with non-EU States it must be wary of such business opportunities. First a number of such countries do not comply with anti-money laundering and anti-corruption regulations. Second, companies might have to use corruption in order to pursue their business activities in corrupt-ridden countries. Looking at the countries mentioned by the UK government as potential business partners it is clear that the UK is looking at doing business in places that are high on the corruption index of Transparency International. In other words, British companies are going to move the trade to an environment which is more corrupt. As Dr Pasculli stressed, there is a need to raise awareness about this potential corruption threat. Nonetheless it might be possible to view these business opportunities in a positive light and argue that British companies could become exporters of good practices, strengthening the rule of law and global governance in these countries and more particularly in the Commonwealth.

In relation to systemic social integrity Dr Pasculli noted that the UK government is supporting high-skilled migration only. This, he believed, is extremely short-sighted. Research shows that corruption causes emigration, particularly of high-skilled migrants looking for opportunities in other countries as they are unable to move on in their home country. This however does not necessarily mean that high skilled migrants are immune to corruption. On the contrary studies demonstrate that immigration from corrupt countries boosts corruption in destination countries. As a result, Dr Pasculli suggested that to avoid the spread of corruption in the UK thorough background checks at the port of entry need to be carried out.

Is the UK continuing to be a global example in relation to anti-corruption practices? Dr Pasculli began by asserting that the UK has often been used as a model for anti-money laundering and anti-corruption measures and policies. The possibility of deregulation once outside the European Union might be viewed as a threat to the excellent contemporary regulation. Whilst some scholars argue that Brexit is a distraction from the anti-corruption agenda, Dr Pasculli contended that this is not necessarily the case. In fact in the past year a variety of institutions (eg the International Anti-Corruption Coordination Centre, the Office for Professional Body Anti-Money Laundering Supervision) have been set up and strategies (eg anti-corruption strategy) and laws (Criminal Finances Act 2017, implementation of the fourth money-laundering directive) drafted and adopted.

Brexit will also have an impact on UK financial sanctions which could potentially lead to an increase in corruption and money-laundering practices. Dr Pasculli first observed that financial sanctions are imposed on individuals in relation to their access to financial assets and services and are imposed with a view to pursue specific foreign and national security policies. Then Dr Pasculli noted that at the moment such sanctions can be imposed by the United Nations Security Council, the European Union (often in implementation of UN Security Council resolutions) and the UK Office of Financial Sanctions. After Brexit there will be no need for the UK to comply with the EU sanctions regime anymore. Dr Pasculli underlined that the new Sanctions and Anti-Money Laundering Bill 2017-2019 endows the executive with large powers for a broad range of purposes (eg fighting measures that challenge the rule of law). Further, it is flanked by weak individual safeguards such as ex post judicial review and no jurisdiction of the Court of Justice of the European Union (which had in the Kadi case protected individuals’ human rights against the application of UN Security Council resolutions). Post-Brexit the UK will not be able to sit in EU meetings that relate to sanctions and as its strong voice on sanctions usually gathered support from other Member States it is argued that that without the UK taking part in such discussions divisions amongst EU member States might show more prominently. That being said if the UK imposes sanctions that are not aligned to other States it will feel the pressure of other States as well as companies that are trading in such States. This in turn might increase the potential for corruption.

Last but not least Dr Pasculli stressed that as the UK will be drafting a new raft of laws it must be careful that such laws are not providing opportunities for corruption and crime. Criminogenic lawmaking is indeed a potential risk post-Brexit with new schemes and laws being designed and individuals as well as companies finding ways to abuse or misuse such schemes (eg welfare benefit, taxes/fees/obligations, access to goods and services). Such potential for corruption is heightened if broad regulatory powers are given to authorities.

Looking forward Dr Pasculli shared with the audience his recommendations: (1) there must be some form of responsabilisation of politicians and companies, (2) education and ethicisation are key to maintaining integrity in public affairs, (3) ‘corruption proofing’ of legislation must become an established practice, (4) external controls must be increased.