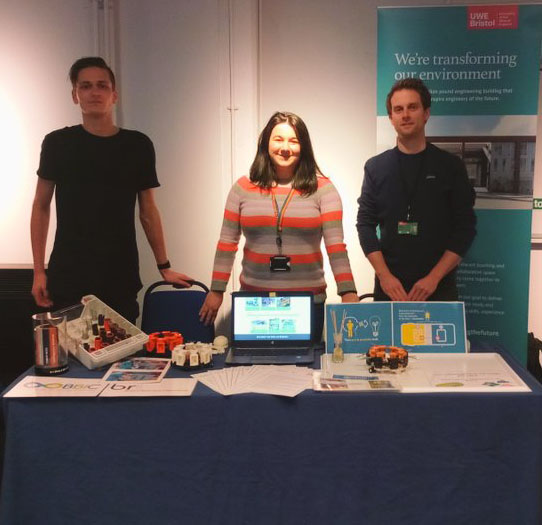 In October, FET awarded the team at the Bioenergy Centre a public engagement and outreach award. The Centre are using this fund to support the production of an interactive workshop for schools – Mud powered robots!

Research Associate Pavlina Theodosiou, who led the project until her move to Newcastle University in January, provides an update here on this exciting workshop.

Before Christmas, Pavlina worked hard alongside electronics engineer technician, Ugnius Barajunas, to obtain quotes from various companies for the prototype motors – the most expensive part of the robot.

At the same time, the two assembled different electronic boards with the 3D printed parts and borrowed motors, to create three robots. The robots were tested with live Microbial FuelCells in the lab and ran well on urine (but don’t worry, they won’t be run on urine in school!)

They presented their results at the a best-in-class overview of robotics and automation, which BotTalks hosted at the watershed in November. The team are now excited about trialling the robots on mud for the first time!

“Overall the project received a lot of interest from public and investors at BotTalks.”

Later in the year, the workshop will be taken into Sea Mills Primary School for the Year 6s to get stuck into.

One thought on “Making mud-powered robots for schools”