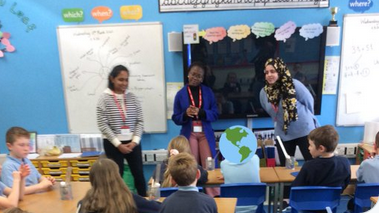 It seems a long time since schools were last open, but at the start of March British Science week went ahead, and UWE staff and students were called up to inspire the next generation of engineers! Read on to find out more.

Chatting about engineering at Hambrook Primary

On Wednesday 11th March, three UWE engineering students were invited into Hambrook Primary to be interviewed by the kids about engineering, what future roles they hoped to have and how all of this linked to their STEM subjects at school.

“They did a great job of talking things through with the children.”

For the second time that week, students got to be role models in a school, this time bringing a hands on activity for the children to have a go at.

The ‘super sucker’ activity got the kids making vacuum cleaners. This was one of the activities developed for the Engineering in Society module, which engineering and education students took into schools in November.

Teachers report that the children loved the activity and the students were equally enthusiastic about the visit.

“They had different perspectives about engineering field and it’s pathways. It was such a good experience!”

Venkat Bakthavatchaalam, lecturer in mechanical engineering, (who only recently joined UWE in January!) attended the career’s fair portion of the day on Friday 13th March. He went armed with thymio robots to grab the attention of the Year 5s tasked with finding out what their Super North Star is, aka – what they want to be when they are older.

“The children were very surprised with the Thymio robots and were curious about sensors and how they worked. Personally, it was a good experience for me to see the children interacting with the robots. Awe was all over their expressions.”

If anyone academics or students are keen on getting involved in school outreach, please get in contact – louisa.cockbill@uwe.ac.uk