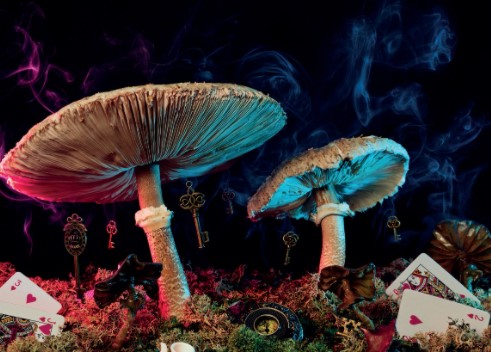 The special issue of LINKs will serve well as a light-touch introduction to unconventional computing for people not familiar with computing and might inspire artists and humanitarians to enter the field.

Genaro Martínez shares some of his research images below:

“Cellular automata and Turing machines are both abstract models:

It is the result of a binary collision between two particles in a three-dimensional space. So, later of 112 generations the result is a propagation of symmetric patterns self-replicating, as demonstrated above.

They are related to patterns in the universe or in nature. In this case, a three-dimensional cellular automaton reproduces one of these patterns from a collision of particles. It is related in physics (big bang theory) where the construction of a universe (artificial in this case) begins later of the collision and expands forever.

Research from other UCL members was also included in the special edition:

Andy Adamatzky and Irina Petrova’s research on Fungal Grey Matter looks at recent discoveries that the electrical activity of fungi is similar to neurons. They briefly overview their discoveries on sensing and computing with fungi.

In the special issue, Andrew Adamatzky, Anna Nikolaidou, Antoni Gandia and Alessandro Chiolerio briefly reviews their ideas on Living wearables from slime mould and fungi. They argue that Living wearables offer a new spectrum of performance possibilities such as reactiveness, adaptiveness, and sensing capabilities. Whilst also being harmless to the environment, biodegradable and they can even nurture the cultivation of new materials in their end of life.

All the research mentioned in the special edition of LINKs can be viewed here.

The UCL was founded by Professor Andy Adamatzky in 2001 as a response to an urgent need to develop computers for next century. Their research looks at novel computational techniques, architectures and working prototypes of non-linear media based computers.