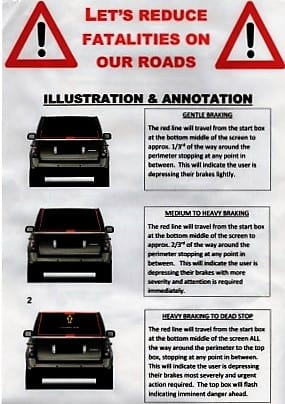 A team of engineers from UWE Bristol is bringing to life one of the winning designs from last year’s Leaders Awards. Designed by Philippa Griffiths of Hugh Sexey CE Middle School in Somerset, the Red Line Braking System (RLBS) displays red lights to alert other drivers of the severity of the braking and levels of attention needed, with the aim of reducing fatalities on our roads. Here Miriam Cristofoletti of the build team shares their latest prototype progress.

In this first prototype, we installed a pressure sensor inside what looks like a break pedal of a car (but instead is an old sewing machine’s pedal!), and we build and programmed a circuit to control a strip of LEDs. This is the basic principle behind the final design. We will then make it bigger and we’ll attach it to a frame to fit around the car’s back windshield. We’d also like to add a Bluetooth system in order not to have wires running from one side of the car to another.