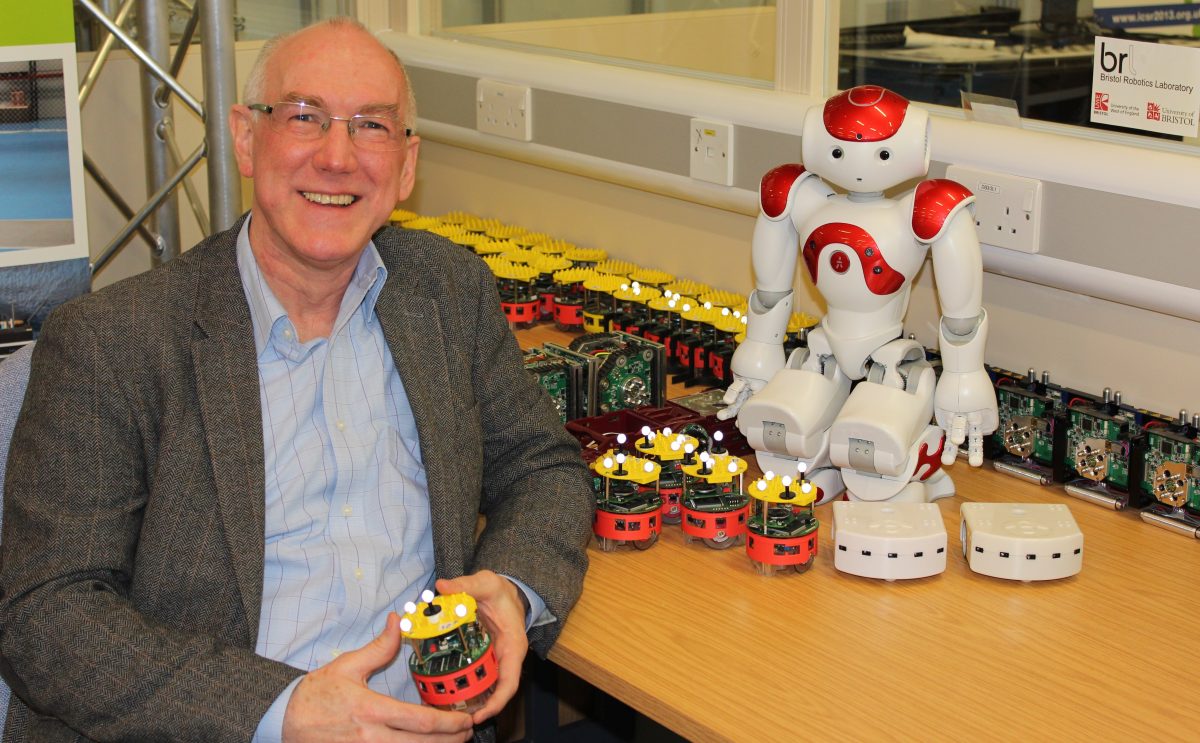 Professor Alan Winfield is a roboticist, a roboethicist, but above all he is a humanist. “I am of course interested in robots but I’m much more interested in people,” says Alan.

An academic at the University of the West of England (UWE Bristol), Alan researches cognitive robotics at the Bristol Robotics Laboratory (BRL), alongside his responsibilities for teaching, writing (including a blog) and public engagement.

One of his current projects aims to help companies avoid sending employees into dangerous environments. Along with project lead Manchester University and partner Birmingham University, he and his colleagues are designing robots to help decommission Britain’s legacy nuclear power plants in the hope of returning them to green field sites.

“When we can build robots that go into old nuclear facilities to explore, map, and dismantle them, we can potentially also develop robots that can go into other dangerous environments such as collapsed buildings after an earthquake or deep mines,” says Alan. Ultimately, this work could save people’s lives.

Over the last two decades, the roboticist has looked at how robots can be intelligent and he is working on a book on the nature of intelligence. It is perhaps his reflection on cognitive robotics that has also made him a roboethicist, someone who thinks about the governance frameworks that should determine how robots are designed, built and operated.

“A roboethicist is someone who makes it their job to worry about the possible societal, economic and environmental consequences of robotics and AI [artificial intelligence],” says Alan. Today, half of his working hours are devoted to roboethics.

An ethical framework for robot design

Although a self-professed optimist, one of Alan’s main worries about the future of robots and AI technology concerns the current lack of regulation and standards. He cites the example of driverless car autopilots. Although certain car manufacturers have undoubtedly tested their systems, they have not done so to any agreed national or international standards, says the scientist. “The world urgently needs safety standards for driverless car autopilots, as well as agencies to certify their safety and investigate when there is a crash – these don’t yet exist,” explains Alan.

International guidelines are also scarce around designing AI and intelligent robots ethically, and Alan is working hard to change this. As a member of the British Standards Institute (BSI) committee, he helped draft what could possibly be the world’s first ethical standard in robotics. Published in 2016, it addresses risks to individuals, society, and the environment. “I am very proud of our work on this,” says Alan, “as it provides a robot designer with a toolkit for assessing the ethical risks associated with what they are doing.”

Alan is also a member of the executive committee leading the IEEE Standards Association’s global initiative on ethical design of AI and autonomous systems. Within this initiative, he co-chairs the General Principles Committee, which is developing high-level principles applying to all AI and autonomous systems such as driverless cars, drones, medical diagnosis AIs, or even search engines. These principles propose that such systems should not infringe human rights, and that their functioning should be transparent. “The idea is to bake ethics in from the very beginning of the design process,” Alan explains.

The IEEE initiative published in December 2016 a draft set of ethical principles called ‘Ethically-aligned Design’, with the aim of advancing a public discussion of how intelligent technologies can be aligned to ethical principles that prioritize human wellbeing. To date, seven standards have spun out of the IEEE initiative and are now in development.

Awareness of ethics through education

Another way of embedding this sense of responsibility in robot designers is through education. In 2015, UWE Bristol began offering a module on the ethics of technology for its robotics and philosophy students. The reasoning behind this move is to encourage engineers to consider the ethical implications of their work, and invite philosophers to think about the practical impact and applicability of ethics on technology.

Overall, Alan believes robotics and AI have already brought many advantages to our lives. The BRL is working on a wide range of beneficial applications, such as assisted living robots that could help the elderly in their homes, robots to assist with keyhole surgery, and work place assistant robots to act as work mates in manufacturing. His advice to budding roboticists is clear: “Do good and always do work that is to the benefit of humanity, rather than purely to satisfy scientific curiosity or to make money.”