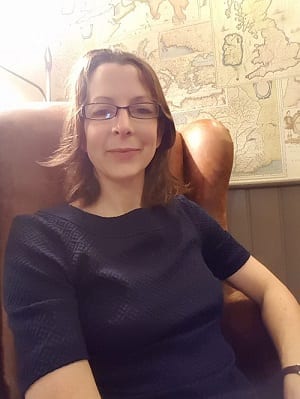 I’m never happier than wallowing in practice theory. I love grappling with the intricacies of the original thinkers in my field – Bourdieu, Schatzki, Giddens – and wading through their dense language, pondering the implications for my data of their carefully articulated thoughts. At present I’m working with data from depth interviews with Strava app users; amateur athletes who track and monitor their running and cycling data. I’m embedded in Foucauldian analyses of surveillance society, M-health studies and the affective detail of practice theoretical accounts.

But I’m also really interested in the implications of theoretically-driven academic research on behaviour change practice. I would not be satisfied if my leather arm-chair ponderings (see pic above!) about – and using – practice theory did not form part of a growing evidence base that has the power or potential to support a shift in the thinking of policymakers and practitioners of behaviour change. However, there is a significant problem with the impact that journal articles have on practice. Generally they don’t. Rather, translational work is required. This can be in the form of conference presentations, blogs and magazine publications, but a further very effective translational method is the ‘toolkit’.

Recently, I have been working with research and analysis consultant Andrew Darnton. He has been advising government departments and public bodies on behaviour change theory and practice for two decades. He is best described as a ‘knowledge broker’, attempting to translate complex academic theory and empirical studies into usable formats for policy and practice. He is the author of two particular ‘tools’ which I am using more and more. The first is ‘ISM’ (individual – social -material), which is a neat mechanism for practitioners and policy makers – who require no theoretical knowledge – to conceptualise and plan behaviour change interventions in a theoretically-underpinned way. The model forces the thinking-through of a behaviour change problem to take a practice-driven approach. It de-centres the individual, considers the materiality, temporality and sequencing, as well as socio-context that frames the performance of practice. It is fun to do, easily achievable and has produced a suite of demonstrable results across many areas, like the reduction of outdoor defecation in Brazil, reduced meat consumption or reduced teen drinking in Scotland. 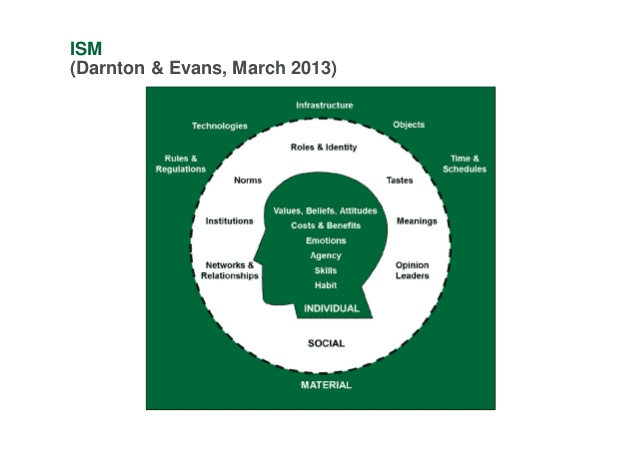 The second model I’ve been working with, again one of Andrew’s, is ReValuation. As a practice theorist, I am so often asked how the theory has been or can be applied, and how to evaluate the impact of a practice-theoretical intervention. In truth, the evidence of practice-driven intervention design is thin on the ground, although a team at UWE and a team at Tatu University in Estonia are developing school culture-change programs to consider the implications of a practice-theoretical approach. One of the central problems of any practice-based approach to social change is evaluation. A linear model of behaviour change is inherently appealing to policy and practice because linearity can more easily be measured. An example is the BMI change in users of a self-monitoring health app. Rather, making subtle shifts across a complex system, like a primary school, might have deep-rooted effects that aren’t visible, or only manifest in the future, or have wholly unintended consequences.

ReValuation does not require its users to understand systems theory, practice theory, complexity theory or have any grasp on evaluation methodology or mechanisms for reporting and measurement. It simply allows for a range of indicators to be collaboratively identified which capture the full value of any intervention, and that can include ‘soft’ outcomes which are captured through story telling and anecdote. It also allows for hard stats to be ‘calculated’, and the potential future value of work to be captured. It speaks to the needs of multiple audiences. 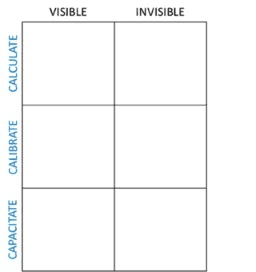 I have been teaching these tools on the Behaviour Change module of UWE’s MSc Sustainable Development, and using them in some recent engagement work. It has been fun, and challenging, stepping away from the theory and allowing the tools to do the work. The enthusiasm with which public audiences have received these models has further emphasised the need for academic researchers to move beyond the peer reviewed journal article. With the Impact agenda this is already embedded in our academic worklife, but it has been nonetheless valuable for me to be reminded of the usefulness of translational tools, which make theory work for the right people in a pragmatic way.