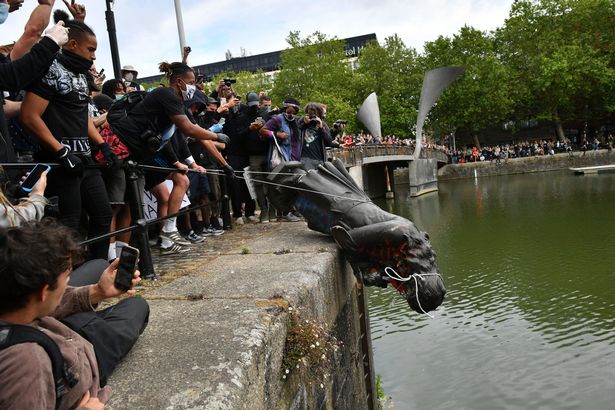 The killing of George Floyd by a police officer in Minneapolis, USA on 25th May 2020 triggered a wave of protests about racial inequality that have spread around the world. In my home city of Bristol, UK the Black Lives Matter march on 7th June led to the toppling of the statue of Edward Colston, a 17th-century slave trader whose sculpture had stood in pride of place in the city centre for 125 years.  The ironic fact that the bronze cast was then dragged to the quayside and unceremoniously dumped into the water at almost precisely the same place as his ships had docked over three hundred years ago did not go unnoticed[1].

Colston, who was born in Bristol in 1636 and lived there for much of his life, made his fortune as a merchant – initially trading wine, fruits and cloth before becoming involved in the slave trade. From 1680-1692 he worked for the Royal Africa Company, which held a monopoly for trading along Africa’s west coast, serving as deputy governor from 1689 to 1690. During his time at the company around 84,000 Africans were transported into slavery, with an estimated 19,000 perishing in the process[2]. Despite his involvement in this abhorrent trade, Colston was widely celebrated for endowing significant sums of money to local schools, hospitals, alms-houses and churches. His statue was erected by the Victorians in 1895 to commemorate his philanthropy and his name still features on many city landmarks.

The actions of the protesters that day drew a range of reactions. Whilst the Home Secretary, Priti Patel, described it as ‘utterly disgraceful’ and the Prime Minister, Boris Johnson, called it a ‘criminal act’ others took a more nuanced approach.  Marvin Rees, the elected Mayor of Bristol, whilst not condoning the wilful damage of public property said the statue had been a ‘personal affront’ to him and many other people for years and that he ‘did not feel any sense of loss’[3].  As televised interviews for Channel 4 and BBC later that day pushed Rees to give a binary response to questions about the repercussions of the incident, he took the opportunity to lay-out the complexities of the context in which it had occurred. Rees outlined the sensitivities and challenges and the need for an open and honest debate about the history of race and inequality in the city. As the first elected Mayor of Afro-Caribbean descent in Europe, who took up his post in 2016 amidst the effects of the Brexit vote and sustained cuts to local government funding, he needed to mobilise the support of a diverse (and divided) population and a wide range of stakeholders. Whilst he actively supported campaigns to review Colston’s legacy, including a decision to rename the city’s Colston Hall music venue, attempts to remove Colston’s statue (or, at the very least, install a new plaque describing the atrocities that he had committed) had thus far been undermined[4]. With a finite amount of time, resource and political capital, Rees had many other priorities to attend to in order to address the challenges and divisions within the city[5].

Whilst some expressed outrage that the statue was pulled down David Olusoga, Professor of Public History at University of Manchester and a resident of Bristol, pointed out that the real question was why “21st-century Bristol still had a statue of a slave trader on public display” in the first place[6]. To those who suggested that removing Colston’s statue was an attempt to erase the city’s past, he responded “the toppling of Edward Colston’s statue is not an attack on history – it is history”. The legacy of Colston is writ large across the city and will not be forgotten simply because his image no longer gazes down upon those who walk the city’s streets. In an interview for the BBC on the day of the protests Olusoga argued “statues aren’t about history they are about adoration. This man was not great, he was a slave trader and a murderer”[7].

The speed with which other cities across the country have responded by reviewing and removing statues that fail to reflect the multi-cultural nature of contemporary Britain shows that these thoughts are finally being heard[8]. The history of colonisation and slavery that fuelled Britain’s economic, cultural and political influence for many centuries has become woven into the fabric of our institutions and society leaving many of us blind to the day-to-day racism and inequality it perpetuates.

Speaking at the funeral of George Floyd on 9th June Rev. Bill Lawson, who had campaigned alongside Rev. Martin Luther King Jr in the 1960’s, said “back in the days when I used to be part of marches, all the marchers were black, but now there are white people who know the story and there are Hispanics who know the story and there are Asians who know the story”[9].  He went on to say “Out of his [George Floyd’s] death has come a movement, a worldwide movement. But that movement is not going to stop after two weeks, three weeks, a month. That movement is going to change the world.”

The events of the past few weeks have a great deal to tell us about the nature and purpose of good leadership in contemporary society. Firstly, they demonstrate that in the second decade of the 21st Century we are still far from the ‘post-racial’ society that some may claim. The roots of racism go back many years and will no doubt take many more to rectify. The diversity of our workforce and communities is widely acknowledged as a significant source of creativity, innovation and competitive advantage yet the relatively superficial attempts to tackle unconscious bias within organisations barely scratches the surface of the discrimination experienced by black, Asian and minority ethnic (BAME) individuals on a daily basis. The role of leaders in a progressive, multi-cultural society is to actively foster and promote diversity in all its forms and to dismantle systems, structures and processes that “inhibit the full and equal engagement of all individuals”[10]. This is difficult and demanding work that requires significant time and emotional investment. It requires listening to and learning from the lived experience of others, and to actively champion and support marginalised individuals and groups. To quote Ruth Hunt, former CEO of the LGBT rights organisation Stonewall, “if you have any power whatsoever, think about how you can share it”[11].

Secondly it shows the need for a deep appreciation of context, informed by genuine respect for the plurality of perspectives on any particular issue. The Police Superintendent for Bristol, Andy Bennett, noted that whilst his officers were present when the statue of Colston was removed and pushed into the harbour, a decision was taken not to intervene as doing so was likely to lead to further disorder. In explaining this decision, he said “whilst I’m disappointed people would damage one of our statues, I do understand why it has happened, it is very symbolic” [12].  Bennett, like Rees, demonstrated a nuanced understanding of the issues and the potential for unintended consequences from his actions. Whilst, of course, attention would have been given to the immediate context of the situation it is highly likely that he also considered the wider context of policing and criminal justice within the city.  Bennett and his colleagues had invested considerable time and effort over many years building and strengthening relationships, trust and collaboration between diverse groups and communities and would, no doubt, be well aware of the long-term knock-on effect of heavy-handed policing in a situation such as this. For those protesting that day the statue of Colston was a vivid symbol of oppression and a reminder of the lack of progress that had been made in tackling systemic inequality[13].

And thirdly it demonstrates the importance of genuine, open discussion in mobilising and sustaining social change. Both Rees and Bennett’s response to the incidents in Bristol on 7th June show a real awareness of the importance of shifting the narrative from blame to reconciliation. The day after the protest Bristol City Council announced its intent to create a new exhibition at the city’s MShed Museum featuring placards and banners from the march, most likely alongside the despoiled statue of Edward Colston once retrieved from the harbour. A day later, Rees announced the launch of a new commission to document and share the ‘true history’ of Bristol[14].

Recognition of the disproportionate impact of the Coronavirus pandemic on BAME communities – both in health and economic terms – alongside a growing sense that not enough is being done at national level to address this is, of course, another key part of the backdrop to recent events[15]. At the time of the Black Lives Matter protests, the UK was still experiencing high numbers of infections and deaths from Covid-19 and laws were in place to enforce social distancing and prohibit gatherings of more than six people. The fact that so many people still took to the streets demonstrated the strength of emotion and level of concern about racial inequality.

Following the suffering and disruption caused by Covid-19 and the trauma of George Floyd’s death there is perhaps a glimmer of hope. Back in April Rees argued that the post-Covid recovery in Bristol should focus on building a “more sustainable, more inclusive, more fair and more just” economy and had begun rallying support for this across the city[16]. Indeed, the groundwork for such an approach had already been laid over the past few years through the development of the One City Approach[17] and the launch of the One City Plan in January 2019. This bold vision and action plan was inspired by a similar initiative in New York that set out a long-term strategy, co-produced with diverse communities and stakeholders, to build a thriving and inclusive city aligned with the UN Sustainable Development Goals[18]. The three aspects of inclusive place-based leadership outlined above – allyship, understanding and dialogue – will undoubtedly form the bedrock of Bristol’s recovery plan as it emerges from lockdown into a post-Covid world, hopefully building a stronger sense of shared purpose and commitment to learning from our past and moving forward in a caring and considered way.

Whilst the opinions expressed in this article are my own, they are informed by my work with number of colleagues, including Anita Gulati, Dr. Addy Adelaine, Professor Carol Jarvis and Stella Warren, whose own ideas have greatly influenced my awareness and understanding of leadership and inclusion. My reflections on the leadership of Marvin Rees and Andy Bennett are informed not only by media reports but also through engaging directly with each of them on citywide initiatives, including the Bristol One City Approach, Bristol Leadership Challenge and Bristol Golden Key.