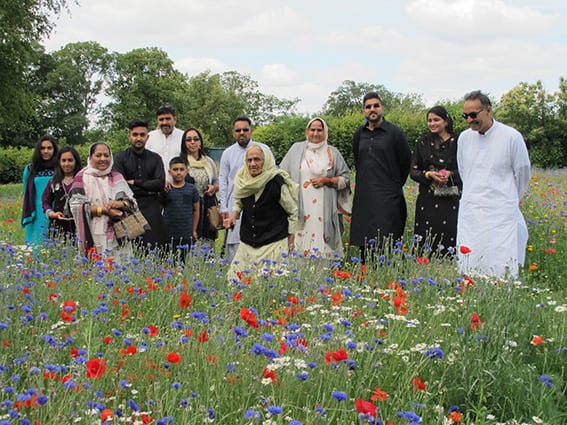 The power of flowers isn’t difficult to appreciate on a cold, grey November afternoon. Vibrant, colourful flowers lift the spirit at any time of year, but probably more so in winter. Research has shown that a gift of flowers can produce a strong emotional response, a true or ‘duchenne’ smile in the recipient (Haviland-Jones et al., 2005). Positive reactions to flowers cross cultures, and my own research in the UK has highlighted a threshold of 27% flower cover, the critical percentage cover needed to produce the ‘wow factor’ (Hoyle et al., 2017).

Introducing meadows is one way to introduce the ‘wow factor’ to urban greenspaces. In the UK the obsession with meadows started in the wake of the London 2012 Olympics, when media coverage of the exotic Californian poppies and cornflowers around the stadium produced an adulatory response. I worked on the Olympic meadows leading up to the games. The day before the opening ceremony the park was open to gamesmaker volunteers. As people swarmed to photograph the meadows we knew something special was happening. At the same time, the role of meadow flowers in supporting urban pollinators was broadcast by Sarah Raven on the BBC. As local authorities saw the potential to make greenspaces more appealing to the public, support biodiversity and possibly save labour costs on mowing, meadows went mainstream…

Yet urban meadows are not really meadows. Traditional hay meadows consist of forb (flower) and grass species. They are perennials, flowering every year, and are maintained by animal grazing or an annual hay cut at the end of the growing season. In contrast, urban meadows are deliberately designed. Designed annual meadows flower just once before needing reseeding and don’t contain any grasses.

Should we be sowing designed annual or perennial meadows in our urban spaces?

Annual meadows have proved popular with the public because the mixes have included vibrant flowers, usually produced by non-native species: Californian poppies or plains coreopsis, for example. These have the advantage that they provide pollen and nectar at the end of the growing season when our UK species have finished flowering, but because they need annual reseeding, they are far less sustainable than perennials. Once perennials have been sown they flower again year after year if maintained by one or two cuts a year.

If the stems are left at the end of the growing season they also have the advantage of providing overwintering habitats for insects. People sometimes object to brown, messy vegetation in public spaces, but our work in Luton and Bedford showed that if people were informed of the biodiversity benefits of leaving the meadows long after flowering, they were much readier to accept them

But what sort of meadows do people and invertebrates prefer?

Our research showed that in the case of perennial meadows people reacted most positively to moderately tall meadows with high species (and floral) diversity. Insects also preferred the taller highly floral meadows which provided resources such as pollen and nectar and habitat. Both people and pollinators reacted particularly positively to the blue Vipers Bugloss (Echium Vulgare) in our perennial mixes.

But were these positive reactions to the biodiversity or the colourful aesthetics of the flowers? We conducted a follow-on experiment with annual meadows on a former minigolf site in Wardown Park, Luton. The evidence was conclusive for both people and visible pollinators: colour, rather than species diversity was the driver of preference. But it’s never quite so simple…other, equally important non-pollinating insects responded to species diversity, and were found to be more prolific in the LOW species diversity meadows.

Where should we sow meadows?

Our research showed that although some people like to see meadows immediately outside their homes, others don’t. The majority of people we spoke to in Bedford and Luton appreciated seeing perennial meadows in residential areas, yet one described their introduction as ‘a wanton act of vandalism’. The public is really many publics. Our local authority partners thought that many established residents valued ‘tidy’ urban spaces. They observed that the introduction of wilder meadows into new developments had been successful, and had gained support from new residents .

Are meadows cheaper to maintain than amenity mown grass?

The short answer is – unfortunately not. One argument often put forward in favour of urban meadows is the perceived cost saving in regular mowing of short amenity grass. However, regular mowing might be labour intensive, but the small volume of cuttings generated each time can be left to rot on the surface. In contrast, the annual ‘hay cut’ of a perennial meadow generates a large volume of cuttings. Because this is likely to contain litter, dog excrement and other urban hazards, it is not viable as compost, so local authorities must pay to remove and incinerate it. More research is still needed on the potential to use these cuttings in biogas production….