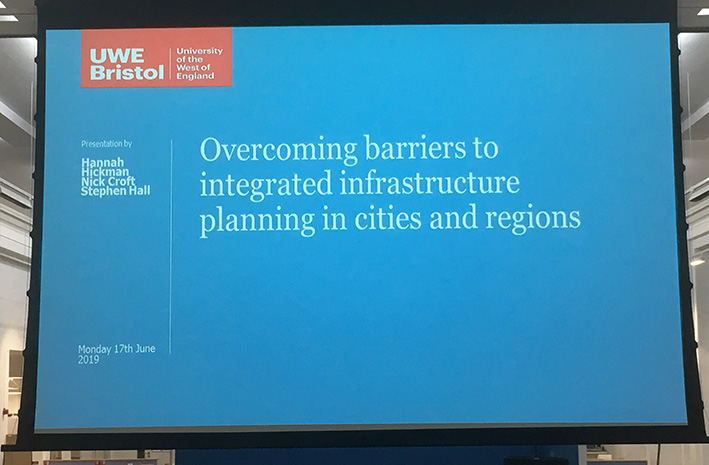 Strategic spatial planning and governance at the city and city-region level.

On Monday 17th June, staff from Bristol City Council and the University of West of England joined together for the second in a series of seminars aimed at drawing professional town planners and academics together – practice informed research and research informed practice in action!

Sarah O’Driscoll, Strategic City Planning Manager at Bristol City Council was first up. She gave an update on progress on the West of England Joint Spatial Plan (JSP) and the challenging economic and housing aspirations contained within the draft.

As the first ‘new style’ sub-regional spatial plan to be subject to examination and produced under joint arrangements (including a shared staff resource across the four West of England authorities: Bristol, South Gloucestershire, Bath and NE Somerset and N Somerset), this was both fascinating and timely, as examination of the JSP starts shortly. UWE colleagues were particularly keen to understand the role of the West of England Combined Authority (WECA) in the preparation of the JSP and how this might change in the future once the planning powers of WECA – including the preparation of a joint plan – are operationalised. UWE staff also asked whether students might be able to observe the examination. Yes was the answer. Students must be encouraged to attend as this will no doubt comprise some very interesting debate!

Next up was Colin Chapman, Local Plan Team Manager at Bristol City Council. His subject was the content of Bristol’s draft local plan recently out for consultation. He shared a compelling narrative around the continued need for densification within the city’s green belt constrained boundary. He highlighted several exciting – as well as challenging – opportunities for substantial development. Particularly striking was the proposed diversification of St Philip’s Marsh. Currently an industrial area of the city, but with a long canal frontage and proximity to the city centre, Colin made a convincing case for achieving a greater mix of uses here. The opportunity for 2,500 homes at the Cumberland Basin – again an exciting waterfront location – raised some eyebrows: not because of the number of homes proposed necessarily but because of the re-configuration of a key arterial road network into and out of the city that this might entail! Colin ended by highlighting a frequently cited response to recent consultation: “we understand the need for all these homes but where’s the infrastructure?”

This was the perfect segway into the first of UWE’s contribution, which was on research commissioned by the Royal Town Planning Institute on infrastructure governance in towns, cities and regions. Hannah Hickman and Stephen Hall shared some key emerging findings, highlighting both the systemic and practical challenges to achieving effective integrated infrastructure planning.

Bristol City Council colleagues were particularly interested in the varied findings around the challenges of achieving effective engagement between the planning community and providers (a very variable experience depending on sector) and highlighted their own experiences – both positive and negative – of engaging with statutory providers in particular. The culture of infrastructure funding ‘by bidding’ was a prominent theme of discussion, with the effort required to bid for pots of money without any certainty that funding would be forthcoming highlighted as a frustration. Watch this space for news of the final report and subsequent more detailed presentation of findings – including at the forthcoming AESOP conference in early July in Venice (lucky us!).

Finally, Hannah Hickman introduced some research being led by Dr Katie McClymont and Adam Sheppard at UWE on ‘re-thinking regulation’ which will explore questions around the relationship between policy aspirations in place visions and plans, and the effectiveness of tools of regulation (such as development control, prior approvals, permitted development and permission in principle) in achieving them. There was much enthusiasm for exploring these questions jointly.

The overall outcome? Much shared learning, a positive appetite for continued ongoing dialogue, and the eager consumption of a few custard creams and chocolate digestives (dark!).