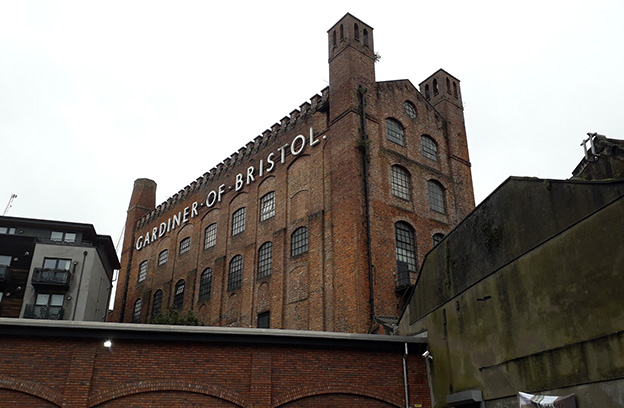 I was privileged to be invited by Rising Arts Agency[1] as a ‘keynote listener’ in their performance of a conversation on the question of ‘who is allowed space to create in Bristol?’ on 4th October 2020. This was part of the Centre of Gravity exhibition in Soapworks/the old Gardiner Haskins[2] building in Bristol. Sitting in a circle for part of a conversation which carried on all afternoon and featured inputs from various young artists, I was one of a selection of ‘listeners’ who were allowed to contribute only one sentence to this conversation.

I will here try to outline to some of the things I heard, and reflect on where this conversation may lead. I will not do justice to the depth or breadth of the conversation in this small space, nor do I claim that the voice written here is anything other than mine, but I am doing this because I want to express what I heard when I was listening because I feel being in a position which gives me an audience for my words, I have a responsibility to take this conversation forward.

I am going to focus on three themes which I heard weave throughout the conversation: change, ownership, and the nature of space. This does not represent the totality of what was said, or the totality of what I heard (and I don’t assume these to be the same thing), but these ideas resonated with me, thinking as a planner about more equitable and inspiring urban spaces for the future.

The conversation opened with a discussion about the (in)affordability of space, for living and for arts, and the need for the democratisation of space at all scales- the room, the building and the city. This rapidly linked to ideas of gentrification- including a reflection on whether this conversation itself was a form of gentrification- and the nature of change. Participants saw change as inevitable: but the emotional impact (as well as financial benefits) being unevenly distributed. Questions were raised about who has to let go of the things to which they are emotionally attached for change to come about in ‘the ecology of capitalism’. Change in the city is about the movement of people, and the acceptability of this is tied to money- who brings money in by making changes, who brings a cost by arriving somewhere? Who is let in, what is protected?

These questions on belonging, and voice in change linked to the discussions of ideas of ownership. Ownership as paradoxical term- it implies ‘home’, safe space, and comfort but also unfairness, because not all have it- not everyone has somewhere they (feel they) own. Ownership was described as individual, financial, emotional- and questions raised of how can cities accommodate all of these sorts of ownership. More negatively, ownership was also seen as limiting, tying down, holding back, stuck in one place. This relates to the impact a space has on the product or performance of all artists and the implications of the difficult balance between stability and trappedness. Moreover, this is of particular concern to young artists, asking how old do we have to be to be taken seriously- when are we no longer emerging, and therefore have the legitimacy to claim space and to remake the city in their ways, rather than being invited into space: having space for guests and visitors, rather than being visitors and guests in spaces which are owned by someone else.

Debating change and ownership in this way questions static understandings of space and place. These are questions of scale (the city itself as a space) and of purpose (the role of arts as bring about social change).  Physical space is important for reflection and connections and for new ways of experiencing ourselves- beyond the space of the phone. A particular point here was the potential of abandoned buildings: emptiness may be seen as a problem in planning/property development but offers so much scope for artists, particularly young artists, who need for ‘test space’ for experimentation without gatekeepers. Emptiness or abandonment here are not just physical or economic states, but ones of meaning-the creation of a vessel waiting to be (re)filled with a different essence. In some ways, this comes back to the first point- about being priced out of the market and the fear of gentrification. Where can be left empty for temporary inhabitation, experimentation and expression when everything has a price tag?

At a time of such uncertainty brought about by Covid, and compounded by proposed reforms to the planning system, we have scope to rethinking priorities in society- and in the cities and neighbourhoods in which this society lives. Can we think more deeply about sustaining places- places which sustain us, and in which we manage change in more inclusive and just ways- so that who is allowed space to create, and allowed to create space, is a question of conversation not just of cost.