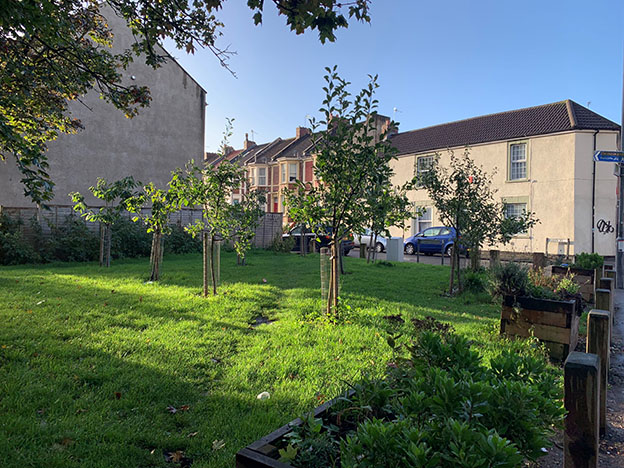 by Danni Sinnett and Max Walters….

Trees provide many benefits to people and wildlife in urban environments. Seen as an opportunity to address climate and ecological emergencies, many cities are developing targets for increasing tree canopy cover and Bristol is no exception. Bristol’s One City Plan includes a target to double tree canopy cover by 2045.

We investigated the feasibility of Bristol’s target and explored different planting scenarios for its achievement. We asked the following questions:

In 2018, the Forest of Avon Trust and partners assessed the benefits provided by Bristol’s trees using the i-Tree Eco software. This estimated canopy cover at 11.9%, lower than the 18.6% from the One City Plan. We used i-Tree Forecast to project future urban forest growth under different tree planting scenarios over 27 years. Because iTree Forecast requires an existing i-Tree Eco assessment we needed to model canopy cover growth from 11.9% to 37.2% (i.e. more than doubling) over the 27-year period, which is therefore a more ambitious target.

Three tree stock sizes were used, selected to be representative of the typical diameters of commercial nursery stock:

We calculated the number of small, medium and large trees needed to achieve the target under the following scenarios:

The greater the annual mortality rate, the more trees will need to be planted to achieve the canopy cover target. Given that Bristol’s current planting is around 10,000 trees per year, planting at least 35,000 trees per year is ambitious, especially given that higher mortality rates may require a greater number to be planted, increasing costs. Whereas adopting a continuous planting regime of 18,000 trees may be more feasible. This demonstrates the importance of good stewardship and long-term maintenance to allow urban trees to reach full maturity and provide the greatest benefits.

Existing tree cover is not evenly distributed across the city, a study by Bristol City Council (2011) found that Greater Bedminster and Ashley, Easton and Lawrence Hill have the lowest levels of canopy cover in Bristol at 11% and 9% respectively. These neighbourhoods have also been identified to be some of the most deprived within the city. Although city wide targets are useful tree planting should be targeted to address inequalities across the city.