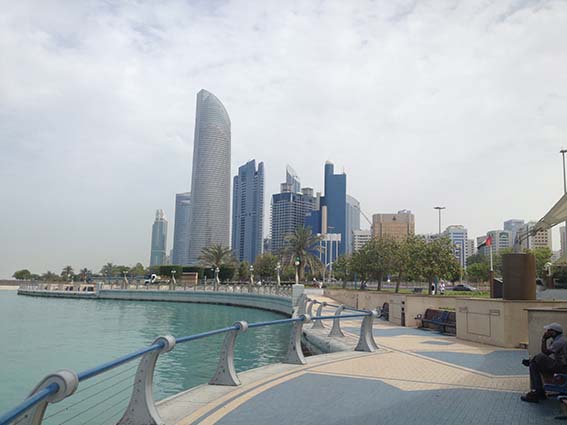 I was off to present at the AMPS Conference Constructing an Urban Future, at the University of Abu Dhabi. I started the first stage of my journey at the bus stop in Bristol on a warm sunny Friday morning.  It felt as though spring had finally sprung.  After said bus ride, and two flights, I landed in Abu Dhabi as dawn was breaking. This made the airport look more like a spaceport on Mars than anywhere on this planet. 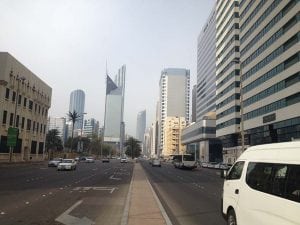 After another bus ride into the city, I was able to leave my case at the hotel reception before heading out along the Corniche waterfront. The city of Abu Dhabi has developed rapidly in the past 14 years since Shiekh Khalifa came to power and opened the country to redevelopment. This has created a city of iconic, gleaming towers. However, despite the negative evidence from western countries, much of the development is geared on travel by private car. This has led to the same problems of congestion and air pollution experienced worldwide. The city’s lack of a metro system means the city lacks coherence unless you can drive.

We were warmly welcomed to Abu Dhabi University for the first day of the conference, where the keynote speakers discussed the need for connectivity and the challenges of urban design, when not focussed on people. This is beginning to change in the UAE. Across the country, innovative start-up centres and small-scale shopping centres are becoming increasingly popular, in competition with the large-scale malls. 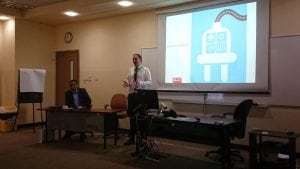 I presented my paper “Harnessing Energy from Highways” to an interested and informed audience. They asked challenging questions and wanted to know what my plans were for the future. An attendee from Saudi Arabia suggested that the concept had commercial possibilities, but I needed to do more work to get it to this stage. I have subsequently taken this advice forward to inform the next stage of my research.

Attendees came from seventeen different countries, providing a wealth of case studies. These proved that many of the problems we face in the UK are similar to those faced elsewhere in the World. We can certainly learn from some of them too. Exemplars include the innovative, community-based solutions to improve cities in Jordan and new waste management processes being delivered in India. From this perspective, I added to my understanding of these issues and identified potential collaborators for future projects. 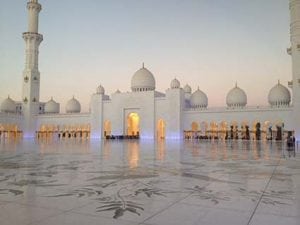 The conference ended with whirlwind visit to the iconic Sheikh Zayed Mosque at sunset, before two flights to the UK and a bus ride back to Bristol on a wintery Tuesday morning. Snow was on the ground and a biting wind tore at my springtime clothes. What did you guys do to the weather whilst I was away?

Congratulations to David on his new post at Highways England. He is much-missed in our research centre.