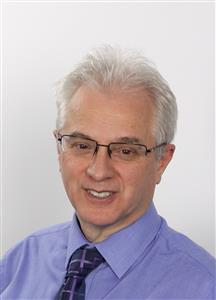 David joined UWE Bristol in 2016 after over 30 years of working in the industrial research laboratories of multi-national companies; BAE Systems and Courtaulds. At the early stages of his career there he worked on understanding the structure and properties of materials and how those properties were impacted by processing. In later years he was the Programme Manager for the Head Office funded Research activities.

Now David’s research activities are associated with bio sensing technologies and in particular the development of point of care (PoC) sensing systems for a number of applications such as COPD, UTIs, and transplant rejection markers. Since, no one single biomarker is normally sufficient to categorically give a diagnosis the design of a PoC system that can specifically measure the concentration of two or three bio markers at very different concentration levels is required. His team has expertise in the design of microfluidic systems and the ability to produce prototype systems to test whether proposed solutions actually work.

Working with partners to conduct feasibility studies from literature reviews through to joint collaborative projects funded by Innovate UK.
As examples he has recently completed a study for a company on wearable hydration sensors not only describing how they work but also detailing what sensors are currently commercially available. He has also just finished an Innovate UK project where he was involved with the design of a novel isothermal test for Tape worm to to be developed for sub Saharan Africa. Normal tests for the DNA of tape worm would require expensive equipment that would heat and cool the sample many times to allow replication of the DNA. The test they have developed utilises Recombinase Polymerase Amplification designed to work at “arm pit” temperatures so the test can be used by an unskilled person in the field. The project supported a company developing off grid latrines for Africa, where bio gas would be produced for cooking and other waste would be used as a fertiliser for crops. A requirement of the project was to ensure that tape worms were not spread onto crops thus entering the food cycle.